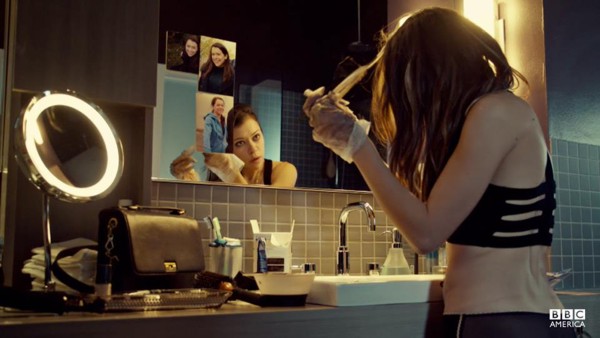 Back in late December we brought you a teaser trailer for the upcoming BBC America original scripted science fiction series Orphan Black (Orphan Black: New BBC America Original SciFi Series – Teaser Trailer).  The teaser really didn’t give much away other than the basic premise of a woman who discovers she’s just one of several clones.  Between the teaser and the synopsis you could easily get the idea that this show could be either really good or fall prey to its own not-completely-unique premise.

Just a few days ago People.com released an exclusive look at the first full trailer for the series which premieres on Saturday, March 30 at 9/8c.  From where I’m sitting this new trailer removes any doubt that Orphan Black is going to rock.  Sure, that’s kind of the point of trailers, isn’t it?   Go ahead, watch for yourself and tell me this trailer doesn’t do a much better job of getting you pumped for this new series.  It looks like we might be in for one hell of an exciting ride.

Now wasn’t that a lot more exciting?  I know, right?

Sarah has always lived the life of an orphan outsider. But a clone is never alone.

Sarah hopes that cleaning out a dead woman’s bank account will solve all her problems. Instead, her problems multiply – and so does she. Experience a whole new side of BBC AMERICA with the channel’s next original scripted series, “Orphan Black,” the exciting and ambitious new addition to the Supernatural Saturday programming block. “Orphan Black” features rising star Tatiana Maslany “(Cas & Dylan,” “Picture Day”) in the lead role of Sarah, an outsider and orphan whose life changes dramatically after witnessing the suicide of a woman who looks just like her. Sarah assumes her identity, her boyfriend and her bank account. But instead of solving her problems, the street smart chameleon is thrust headlong into a kaleidoscopic mystery. She makes the dizzying discovery that she and the dead woman are clones…

but are they the only ones? Sarah quickly finds herself caught in the middle of a deadly conspiracy and must race to find answers about who she is and how many others there are just like her. Orphan Black premieres Saturday, March 30, 9:00pm ET/PT, as part of BBC AMERICA’s Supernatural Saturday.