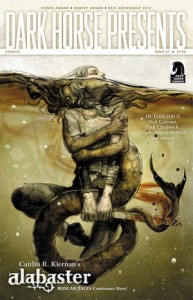 As there were no Whedonverse comics out last week (these are the ones I normally review on here) I decided to dip my foot into unknown waters and have a look at something new. Dark Horse presents issue 21 of a collection of 11 stories, some one shot, some starting a new series, others part 2 or 3 or even 18 of existing series. I am a comic nerd, but I am perhaps a bit scared of branching out and trying new things, so this is a great way of getting to read some stuff you might never have thought about trying.
WRITERS:Neil Gaiman, Duane Swierczynski, Geoffrey Thorne, Michael Avon Oeming, Denis Medri, Gabriel Hardman, Corinna Bechko, Caitlín R. Kiernan, Michael T. Gilbert, Simon Roy, Jason Wordie, Shannon Wheeler, Shaun Manning
ARTISTS:Michael Avon Oeming, Denis Medri, Gabriel Hardman, Michael T. Gilbert, Simon Roy, Jason Wordie, Shannon Wheeler, Paul Chadwick, Eric Nguyen, Todd Harris, Steve Lieber, Greg Ruth, Andrew Drilon
PUBLISHER: Dark Horse Comics
PRICE: $7.99
RELEASE: February 13th
I don’t think I will go through all 11 stories out there one by one as this would get to be a veeeeeery long review. So I’ll focus on a few, but I’ll say that on the whole there was nothing in there that I disliked. I struggled to read anything that was from the middle of a series. Of course if I had read some of the older Dark Horse presents this problem wouldn’t have occurred.
The first story is Alabaster boxcar tales, by Caitlin Kiernan. This was issue 4, and it really made me want to read the previous issues. It is described as a monster hunting girl “struggling with the possibility that she may be as wicked as the beasts she seeks to destroy.” I was intrigued by this series, and I felt I didn’t really get what was going on as I had missed 3 issues. But I would be quite happy to pick this one up, as it seems dark, twisted and filled with interesting characters.
The next story that stood out to me was actually a breakdown of a song. I mostly remembered this song from the grungy 90’s and Ugly Kid Joe covering it, the original of  “Cat’s in the cradle” is by Harry Chapin. This comic is by Shaun Manning. The graphics stand out, and create a quite dark mood, the picking apart of the song and the thinking behind it is really clever. It is short but sweet.
The journeyman by Geoffrey Thorne was another part 2 of a series I previously haven’t read but was quite taken in by. A genius scientist woman, a mysterious box and a rather odd man, Journeyman. Well written and enjoyable characters, I would be quite happy to keep on reading this one too.
I love Neil Gaiman, and one of the reasons I wanted to read this anthology was because Neil Gaiman was featured in it. His story is more of a poem than a story really, and it is wacky, funny, quirky and everything you would expect really, very enjoyable. Go read it now, it is called “The day the Saucers came”.
There are two more stories that stood out for me, first one is Villain House by Shannon Wheeler. This story reminds me more of comic strips than any of the others, but it is rather sweet and hilarious at the same time.  It follows two crooks, wanna-be evil masterminds, but more like the failing henchmen that superheroes constantly put behind bars. They are bumbling idiots and get up to much silliness. Hope to read more of this!
The last one is Arcade Boy by Denis Medri. I took one look at this and thought “ohhh purdy”. Bright mangaesque and colours that really stand out. I think I might even say it pops, yes it really pops. The story follows a young man and how he becomes the superhero Arcade boy. I felt almost sad reading a few pages as I knew it would end soon and I would have no more to read, gimme more NOW!
Actually I will mention one more, the last story in the bunch is Finder by Carla Speed McNeil. Now this was issue 18, and when I read it I was thinking “err what now” through most of it. I think some of that was due to the fact I had not read the 17 previous issues, but also because it is a bit far out. A bit of a mind trip. I do kind of want to read more of it though, I felt a bit like when I was a young teen watching Æon Flux on MTV and being mesmerized without really getting the plot.
I have left out a lot, but you know what, there is nothing bad in there, it is all worthy of reading and if I was less tired I should review them all, but this way you will get less spoilers. There is something for everyone in here, with very many different styles and storytelling. Go get it, even if it is just for Arcade Boy!