Home » TV » TV News » Doctor Who Is Bringing Back Another Classic Enemy – The Ice Warriors!

Doctor Who Is Bringing Back Another Classic Enemy – The Ice Warriors! 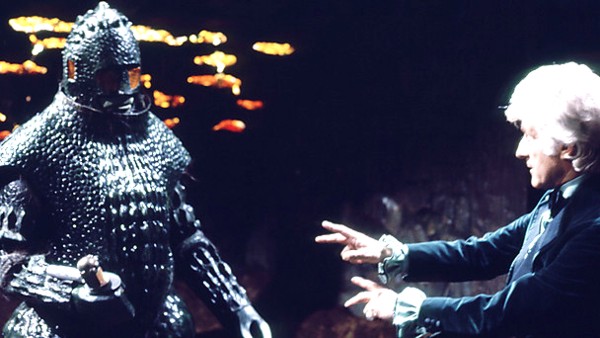 Forget snakes on a plane, Doctor Who is bringing us Ice Warriors on a Russian submarine!  If you’re not familiar with the Ice Warriors that’s not really surprising since they haven’t been seen in almost 40 years.  In an exclusive story, SFX has revealed that this long-gone classic baddie will finally make a return to the series after being on ice for almost four decades.

These Lego-handed monstrosities hail from a little planet called Mars.  Maybe you’ve heard of it.  They first appeared during Patrick Troughton’s turn as the Doctor in 1967’s aptly-titled The Ice Warriors, then went on to appear in only three more episodes ending with 1974’s The Monster of Peladon, by which time John Pertwee was controlling the TARDIS.  They did get a brief mention in 2009 during David Tennant’s run in the episode The Waters of Mars, but have not actually been seen in a first-run episode since 1974.

When the Ice Warriors were first introduced the storyline took place in Earth’s future, probably around the year 3000 AD according to a BBC America blog post.  In the story Earth was experiencing a second ice age and a scientific team discovered a large, reptilian creature frozen deep within the ice for what had been thousands of years.  As is always the case when anyone in movies or television finds something large and strange frozen in ice, they decided to thaw it out.  And as is always the case, the thing in question spontaneously comes back to life and tries to kill/eat/invade the well-meaning, but misguided characters in question.

We’re not told exactly how the Ice Warriors will cross paths with the Doctor this time or how they managed to get aboard a Russian submarine.  What we do know is they’re probably not there to lend a helping Lego-style hand.  I’ve always enjoyed the tension of claustrophobic submarine settings and to have this long-unseen menace aboard is sure to make matters even more intense.

SFX interviewed executive producer Caro Skinner who talked about the episode which was written by frequent contributor Mark Gatiss.  Skinner had a lot to say about the Ice Warriors and the process of creating the episode:

We’ve got the most fantastic episode by Mark Gatiss, where we are bringing back the Ice Warrior… on a submarine!  It’s a really wonderful kind of ‘bunker’ episode, and a classic monster which Mark has brought his own inimitable twist to.

In the mix of stories that we were planning for this year it felt as if doing something very bold with a monster that hadn’t been seen for a while would be really cool.  Mark is an enormous fan of the Ice Warrior stories and came up with the idea.  The sense of a monster of that scale and that size trapped in a really small, contained environment such as a submarine was a really brilliant story to be able to tell.  And obviously we’ve had a huge amount of fun going back to the traditional designs and recreating them, bringing the Ice Warriors back to life again.

They were such a beautiful original design, and are genuinely really scary in terms of what they look like as they’re coming towards you in that armour.  Letting a huge Ice Warrior loose at the heart of a classic Hunt For Red October style submarine movie was exactly the kind of story that the Doctor should get mixed up in.

The video below is a clip of the Ice Warriors’ first ever appearance.

If you’d like to learn more about these long-absent enemies, the Doctor Who Blog over at BBC America has a brief history and several clips in the post Doctor Who Rogues Gallery: The Ice Warriors.  You can also read the original exclusive by SFX in the article SFX EXCLUSIVE – Official! Ice Warriors Return To Doctor Who This Year.