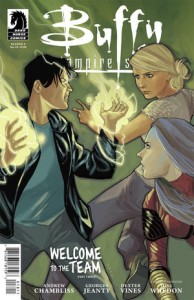 Buffy is fighting the Siphon, Billy is fighting zompires and Dawn is fighting for her life. Issue 18 of Buffy Season 9 is out now. This review includes spoilers.

This issue of Buffy Season 9 sees a lot of fighting going on. Buffy, Koh and her new blue smurfy friend are fighting that pesky Severin. They now also find out why he is on a mighty power stealing mission. He wanted Illyria’s power to travel in time. His devious plan all along was to travel back in time to save his girlfriend from becoming a zompire. Maybe not the most exciting reason after all, the Siphon really is just a random dude that didn’t know about his powers and now has turned into a super villain just for love. It has been done before sadly.

Billy the kid vampire slayer is still out outsmarting the police (but not the zompires) trying to find where Buffy has disappeared to. He gets himself into trouble after figuring out he can check some surveillance tapes and he gets ambushed by zomps. Lucky for him yet another slayer comes to his rescue. Buffy’s roommate Anaheed. Did you suspect she was a slayer? I can’t say I did. I am still not sure about the Billy storyline. I will try not to hate on all the newbies, but he is a bit annoying. At least in this issue he admits to the fact that he isn’t really a slayer.

Now to the most interesting part, Dawn and Zander. Sadly we don’t find out why Dawn is sick but she is getting worse, her body is shutting down and she is in a coma. I have been stabbing in the dark with guesses about what was wrong with her. My theory now is that as there is no magic in the world anymore and Dawn was built with magic, the glue that is holding her molecules together is unraveling rapidly. She may not have any magic abilities herself but she was made by monk mojo from mystic energy. Not to get too smurf obsessed in this review, but you know kinda how Gargamel made Smurfette

The funniest bit in the comic is Xander’s and Andrew’s 80’s comedy film caper of getting Dawn out of the hospital. Nice with a bit of silliness in all the fighting and soul searching. Just what makes Buffy great in the first place. Andrew’s cunning plan? Put Dawn’s mind into the Buffybot to save it whilst her body is deteriorating. That poor Buffybot has been through a lot this series. I still would have liked to see Dawn be pregnant but I guess this is getting more unlikely. I am hoping in next issue we will get more answers. Oh and speaking of Dawn, her nose, it really does not look like that. I am not overly keen on the lack of likeness to the actors so happy that there is no Spike in there at the moment or I might have cried.

I seem to have forgotten this comic is Called Buffy the Vampire Slayer Season 9. What about Buffy? Well Buffy is a bit on the side-line. She is fighting, and losing, retreating, regrouping, and actually forming some sort of “friendship” (I use the term loosely) with Illyria. Illyria seems to have turned into a rather self-sacrificing old one who is ready to let Severin take her power for the greater good. The thinking behind this is that the Siphon can’t handle her power and will go kaablooey.

The council is a rather useless bunch of people I have to say, when are we going to get to see some powers from them? I am still not sure that they are all that good. There may be some underlying issues here, keep your eye on that red balloon I tell you!

All in all, an ok issue. The reason behind Siphon’s power stealing was maybe a bit of an anti-climax, but then again it was the same reason that set Willow on a hellbent mission to end the earth. The Dawn storyline could have a very sad ending, which I really hope it doesn’t. I like Dawn and Xander, and lets face it that dude does not have much luck with his girlfriends. So let’s hope this is going to go in the right direction. Oh and bring Spike back, but only after someone else does the artwork.