Even though it isn’t in black and white the beginning of tonight’s episode reminds me of an old film noir movie.  A lady of the night walking down a dark alley.  We wonder who she is destined to meet and as she walks she feels like she is being watched.  Pausing to look behind her she doesn’t see anything but when she turns around she is confronted by a handsome man in a suit.  Then the feeling stops when the cop flashes his badge and cuffs the prostitute.  The feeling changes again as he chokes the woman to death.  Waking up from a dream the cop sits up and his dog jumps onto the bed and rests her head on his lap.

The Winchesters arrive at another one of their random motels where they plan on meeting their friend James, who we later find out is the cop, to help him with a supernatural problem he seems to be having.  However, as soon as they arrive Dean brings up the fact that Sam has taken on the trials and again tries to convince him that he should tag out and let Dean take over.  Sam refuses and Dean goes out for supplies. 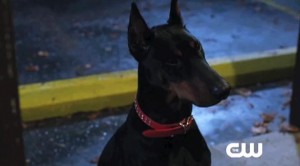 While Dean is gone Sam senses someone outside and when he opens the door a sleek Doberman enters the room, jumps on the bed and wants her belly rubbed.  Sam obliges but when he hears Dean outside he cuts his brother off from entering the room to defuse the anticipated volcano.  When Dean peers into the room instead of a dog he sees a stunning woman sitting on the bed.

She explains to them that her name is Portia and she is a familiar to their friend James Frampton who became a witch after his and the Winchester’s last meeting and that he needs their help.  He has been dreaming of murdering people, but can’t remember actually committing the act.   After a lot of protest from Dean the boys decided to help but they tell James that he has to do his part and when they are asked what that is Dean pulls out iron chains.  While creating a spell to kill a witch, to either use on James or a witch that could be controlling his actions, the boys again have a disagreement about the trails and Sam comes to the conclusion that it isn’t that Dean doesn’t trust him but that Dean can only trust himself.

While James is shackled to his bed Dean and Portia go to interview the witch community where they meet James’s friend Spencer’s familiar Philippe.  Sam poses as a FBI agent to find out what the police on the case know.  After presenting a piece of James shirts, which James found in his trash covered in blood, they learn that the blood matches one of the victims.  Convinced that James is guilty the boys head out to gank him but Portia stops them because as she and James made love, which is against the community rules,  she could see his thoughts and he remembers the kills, but not the prep work or picking out victims.  That is enough for boys to give him the benefit of the doubt and they continue their investigation.

Sam happens upon the fact that local police have more on the case then they are sharing and Dean finds a spell where one witch can place false memories into the mind of another witch.  Allowing James to use his magic to take them inside of the police station they learn that there is a big case built against James and there was an eye-witness who was none other than the familiar Philippe LeChat.  James’ temper flairs and he flings the boys across the room, knocking them out, and orders Portia to leave.  He is going to go and find out why this is happening.

Confronting Phil he learns that his friend Spencer is the one that has set him up,  but before Philippe can say anymore an outside force breaks his neck.  James turns to find Spencer ready for a showdown.  Apparently Spencer wanted Portia to be his soul mate, but was humiliated when she chose James as her master and lover. 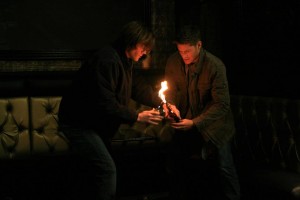 The two witches begin a battle and the boys show up to put Spencer down, but he is a powerful witch and gets into their heads.  Showing them images of their tormented past they are unable to help James, but it is Portia to the rescue when she rushes in, in her dog form, and attacks Spencer.  This allows the boys to come back to reality, light the elixir, chant the spell and kill the bad guy.

James and Portia decide to leave and start over instead of fighting the case against him.  She tells Sam she will truly miss him and when Dean tries to protest that he does like dogs she smiles and says,  “No you really don’t.”

After all they went though on this case Dean admits to Sam that he was wrong about not trusting him.  Everything their family has been through has been soul crushing but the way they got through it was sticking together.  He tells Sam that he trusts him and if Sam says he is good with all this then he will support him one hundred percent.  Sam seems a little shocked and tells his big brother he is good but when he has a small coughing fit that leaves a trace of blood on his lips all doesn’t appear to be good.

Well Supernatural is on a roll lately.  I again enjoyed this episode and I like the track the brothers are on in terms of mending their damaged relationship.  Although I am not liking the blood on Sammy’s lips.

Well until next week my Wayward family I leave you this promo.  I really am looking forward to this one: