Drinking and driving is never a good idea especially when there is a man walking down the deserted road you are driving on.  Come on man have you never watched T.V. before?  Well guy walking gets hit by guy drinking and driving and lays dead on the side of the road, but no worries just leave him over night getting his guts picked over by birds and by the time the cops find him he will heal and walk away, only to be killed again later and which leads the boys to investigate.

We check in with the boys at the bunker.  Sammy is thirsty but his water tastes funny because of the blood filling his mouth.  Dean walks in and Sam quickly hides what is happening, and when Dean stats to complain about the fact they haven’t heard from Cas and Kevin is taking his sweet time with the next challenge Sam presents Dean with a new case.  One that may include zombies. 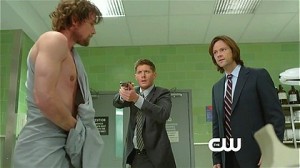 However, zombies aren’t what they encounter, but instead they meet a man who dies once a day and always comes back from that death.  He doesn’t remember who he is only that a few years prior he was pulled out of an avalanche in Europe and when he found out about his ailment he stated to seclude himself from people.

The night they find Shane he is attacked by a woman who is extremely strong, fast and magical, but Shane holds his own and corners her, but she disappears into thin air.

The boys are surprised when a woman and a seven-year old boy shows up.  She tells them that she was in the avalanche with Shane and afterwards they had become close and their closeness resulted in Oliver, the seven-year old, but when he died for the first time and came back she fled.  As Shane bonds with Oliver Sam discovers who he is.  The man is the Titan, a God before the Gods, Prometheus who Zeus had banished to that mountain and forced him to relive death over and over again for betraying the Gods when he stole fire for humanity.   Sam also discovered that the woman who attacked Shane the night before was Artemis, the Goddess of Hunters, Zeus’ daughter.  When they learn that Oliver has the same curse as Prometheus the boys decide to go after Zeus to try to break the curse.

After finding the things they need to summon Zeus they find an abandon warehouse.  When Zeus appears he wants to be released but Dean offers that if he cures the boy then they will let him go.  Zeus rebuffs with being let go first.  Dean calls his bluff and gets Sam and Shane to start to walk away with him, but Hailey releases Zeus thinking he will cure Oliver,  but this only allows Zeus to hit the boys with some of his powers.

Artemis arrives and she is ordered to take care of the boys while Zeus tortures Prometheus.  Learning that his enemy’s son has the curse thrills Zeus and he plans on using the boy as part of the torture.  Sam smooth talks Artemis in believing that she is kind of washed up as the God to the hunters as well as the fact that Prometheus is in love with her, that was a shot in the dark for him and he was right. 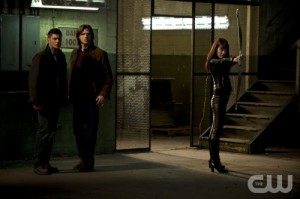 Zeus is just about to kill the boy and make Prometheus watch when Artemis and the boys come back.  Artemis has her arrow, that can kill an immortal, aimed at her father and when he doesn’t heed her warning to stop what he is doing she shoots, but he grabs Prometheus and uses him as a shield.  We all know this is finally the end of his torture, but when Zeus tells him that he has too much fun watching him die over and over and now he will take his boy to replace him Prometheus pushes the arrow deeper into his chest straight through into Zeus.

Artemis takes her father’s body and disappears and the boys, Hailey and Oliver give Shane AKA Prometheus a true hunters fire burial.  On their way back to the bunker Sam is doubting his ability to walk away from the trials unscathed and when he expresses this to Dean it is not received well.  Dean tells Sam that he can’t go back on his promise to live a long life which ends with a normal death.  When they get back to the bunker we learn that Dean isn’t blind and he knows that Sam is hurting and he brings tears to our eyes as he prays to Cas to look out for his little brother.  It breaks our hearts even more when we see that his prayers seem to be falling on deaf ears.

Tonight’s episode was super good.  I had been looking forward to it all week and I wasn’t disappointed.  Well okay perhaps I was just a tad.  I was expecting the Greek Gods to live up to what I had them built up to in my mind, but they were a bit lacking.  Other than that I thoroughly enjoyed this episode.  We have another small hiatus coming up so until March 20th my wayward family be safe and happy.

I leave you with the preview for March 20th episode: