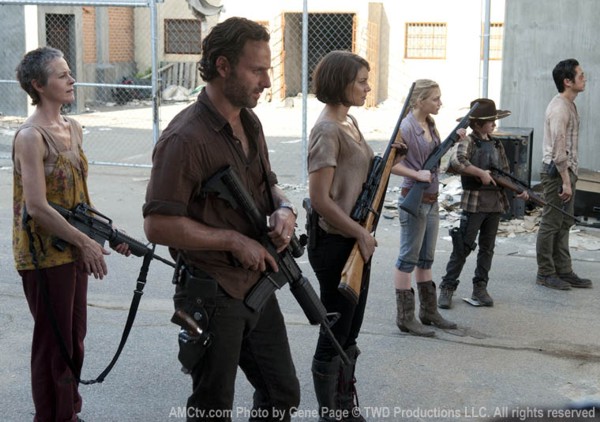 The gun barrels are still warm from the big shoot-out in the final minutes of The Walking Dead episode 310 “Home,” but there are already photos and video for episode 311 “I Ain’t A Judas” and we’ve got them all right here.  The first photo is above and it looks like the group are armed and ready, but for what?  Are they preparing to defend the prison or are they heading out for some payback?

Only time will tell.  To be honest the second photo below doesn’t seem to make the group’s intentions any clearer.  My first impression of this photo is that it’s Maggie standing watch in the prison behind some of those metal tables and wood pallets that Carol and the now dead Axel were setting up.  This could also be a spot at the perimeter of Woodbury, but I doubt they’re going on the offensive in their weakened, and in Rick’s case, crazed, state.  I’m not ruling anything out since this is The Walking Dead and almost everybody’s done something unexpected. 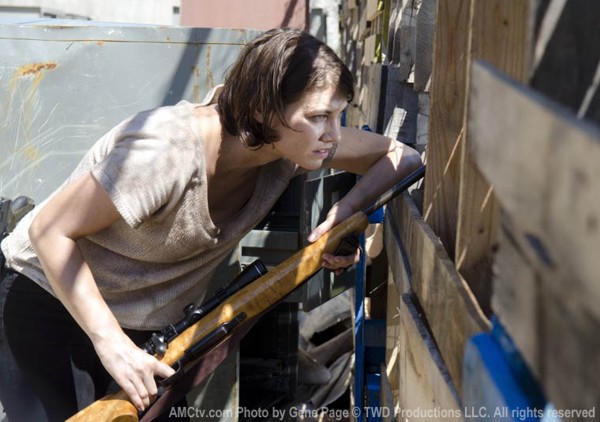 Now for the promo video of episode 311 and it’s got a little of just about everybody in it.  There’s Carl giving advice to Rick, Andrea and the Governor exchanging angry words, Carol advising Daryl, Hershel yelling at Rick, guns, walkers, and duct tape!  Oh my!

So it looks like Andrea’s finally going to pay a visit to her old friends in the prison and everybody’s having problems with just about everybody else.  With the exception of the final minutes of episode 310, the past two episodes of The Walking Dead haven’t been quite as fast-paced as many had hoped, but they were still solid episodes.  The promo teases that the pacing might be about to change.

Speaking of change, there might be a  change in leadership, albeit a temporary one, if Carl’s feelings are any indication.  Listen to a son give his father some level-headed advice.  After recent events, I can’t disagree with what he says.

No truer words have been uttered on the show than Carl’s final four to his father.  “You deserve a rest” indeed, Rick.  Hell, you need a rest or you’re going to end up joining Lori.  Ain’t nobody got time for that…

In this second sneak peek we see Merle telling Hershel what the Governor will do when he comes back to the prison.  This isn’t Merle being all cocky or smug.  No, this is Merle laying it out straight and being sincere, which doesn’t happen very often so relish it.

It seems that Merle may have fallen in line for now.  Hell, he doesn’t really have much of a choice does he?  He can’t go back to Woodbury and his only other option at this point would be to run off alone.  While his medieval stump with detachable bayonet might be a formidable weapon, a one-handed man on his own in a world full of undead cannibals is definitely not a situation any level-headed person would want.

Wait…  Never mind, I forgot I was talking about Merle.