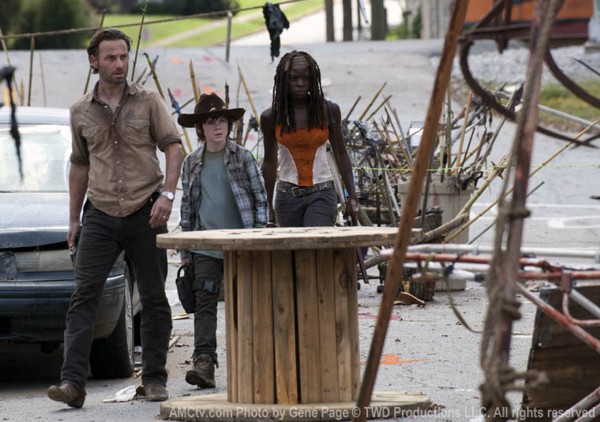 I was a little disappointed by the pacing of episode 311 of The Walking Dead “I Ain’t A Judas,” but it did continue to wind us up for the big clash we know is coming.  Judging by these photos and the videos below it looks like we’re going to see a detour away from the Prison vs Woodbury plotline for a little while.  If you’re like me you’ll find that good news since the back-and-forth between the two locations is getting a little monotonous while we wait for the blowout that’ll probably not come before the final episode which is still several weeks away.

In the picture above we see Rick, Carl and Michonne walking down what appears to be street in another town.  It looks like the three of them are on the briefly discussed supply run and one of their main objectives is to procure weapons and ammunition to use against everybody’s favorite one-eyed nutcase. 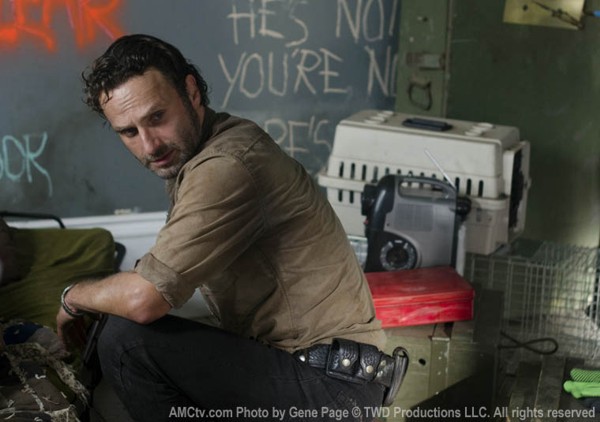 In this second picture it looks like they may be in the classroom of a school judging by what seems to be a chalkboard behind Rick.  It’s hard to tell if there’s anything useful there, but between the cot to Rick’s left and the olive-drab foot locker just behind and to his right I think they’ve stumbled upon a survivor’s living quarters.

There’s a few other things in the picture that a survivor might use like the wire mesh animal trap and the pet carrier, both to the right of Rick.  The trap could be used to catch food while the pet carrier would be a good place to keep a critter alive until meal time.  I’m guessing the grey plastic device in front of the pet carrier is some kind of survival radio, flashlight combo perhaps?  I tried some image searches, but came up blank.  If you recognize what that is please let me know in the comments below or shoot me a message on my Twitter feed.  (Note the not-so-subtle promotion of my ramblings on Twitter.  I’m as smooth as sandpaper.)

Okay.  Enough with the static images and on to this new technology where the pictures move and you even get sound!

The first of three videos you’ll get here absolutely free of charge is the promotional trailer for episode 312 “Clear.”  It certainly makes it look like this episode will focus on the trio’s road trip, but as usual not everything goes swimmingly.

Looks like your typical family vacation.  There’s hitchhikers, a pile of burned bodies, zombies biting your car windows, and a sniper.  Okay, maybe your family vacations weren’t like that, but I’ve been on a few that were almost as bad.

In the first sneak peek the three amigos are traveling along a lone highway (Honestly though, after the outbreak are there really any other kind of highways around?) when they see something that’s not terribly common for them.  It’s a living, breathing hitchhiker all alone on the side of the road.  Good thing for him the “good guys” are driving by.  Or is it?

This poor fellow is all alone and they just ignore him and drive on?  Man, that was cold.  As cold as Michonne’s glare.  Oh boy, I bet karma’s got a special treat for them after such a heartless act.  Let’s check out the second sneak peek and see if the boomerang of fate is going to come back and whack them in the head.

Uh huh, that’s what you get for being a cold-hearted SOB.  Driving around a wreck in the road they get their little SUV stuck in the mud.  And not at all unexpectedly they’re surrounded by window-biting walkers who’ve suddenly appeared out of nowhere like characters in a pop-up book.

Maybe next time they’ll try using something with four wheel drive.  Hell, in that world I’d be driving around in the tank Rick climbed into in the first episode.  To see how they get out of this pickle, and more, tune to AMC this Sunday, March 3 at 9/8c.