Being Human UK Was More Than Expected

Please heed this warning: This article will cover all five seasons of Being Human (UK) and will happily discuss any and all spoilers right through the last episode. You have been fairly warned.

It always sounded like the start of a perfectly crummy joke: A vampire, werewolf, and ghost live together. I avoided it for a few years because of just that, in fact. It wasn’t until the year Series Three aired that I went and grabbed some DVDs of Series One and started watching what would become one of my favorite shows in years.

And here’s the thing – Being Human had vampires, and werewolves, and ghosts, and one zombie eventually, was a show about humanity and knew it. I didn’t watch the first series just to see what big event would happen with vampires and all. I watched the show, hungrily, to see what George, Mitchell and Annie were up to. Scenes of the roommates watching TV, fussing about tea, and generally living their lives are what quickly formed the backbone of the series. The plots could wander where they wanted, but you came back because the show was genuine and funny as often as touching and dark. 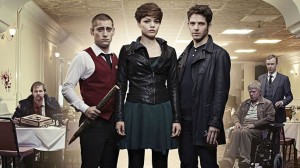 The show was, honestly, smarter than it had any right to be. Here is a toss-off concept for silliness and they knew that and tilted into the wind some days, as you do, but they also seriously knew what they were about. They were about the characters.

Series Two with it’s grip on humanity slipping, showed that right away. Watching Mitchell deal with who he really was, as a person, was fascinating. Because yes he was a vampire and it was cast about in vampire drag for that sort of plot but the reality was – Mitchell was the problem. He was a guy who never learned to contain his urges, who gave into them but refused to ever take blame for his own actions. 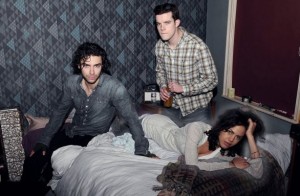 It wasn’t the Vampire who ruined everything. It was Mitchell. Weak, desperate Mitchell. And so they had to go far away. Right into Series Three where we learned that you can’t run away from who you are.

It’s a message the show liked bringing back, of course. But this time they also centered it on George and Nina’s relationships as well as Annie and Mitchell’s. As well, of course, as Mitchell’s rampage. And as he found himself he realized it was his time.

This was a show that never played it safe. The cast was as likely to die as anything and anyone else, really. Mitchell’s death was just the start. Soon Nina is dead, off camera between seasons and then George. Annie would be next.

The thing of it is that the show was deft in the handling of such change. There would always be a new character introduced and known to the viewer who could step in to fill a void, and then they could introduce another new character to get to know, and you couldn’t be sure if they would stay, if someone would leave or what might happen next.

So even while we lost Mitchell we gained Tom for good. Losing George was tempered by gaining Hal and eventually losing Annie would be mitigated by Alex’s arrival to stay. The way the cycle was handled became something I don’t think I’ve seen on another show. Always smooth and fitting, the show knew when a character’s story ended and moved them off the field to their reward, only to bring in another soul in need to working out what and who they were.

And said like that it seems trite, I know. But it wasn’t. This was a master level bit of story shift, the character rotation.

Hal, in the final episode, summed it up: “Annie, George, Mitchell, Nina, the two of you, what none of you realized…what none of us realized; Is the desire to be human is the end, not the beginning. To want it is to have it. You’re not wasting your time Tom, you’ve already won.” and yes that’s a bit too on the nose, but it was the last episode so I can forgive it.

Mind you that last episode started with a musical number, which was perfect.

The finale then went to the heart of the show once more. Yes, they were fighting the Devil, but that only served to make it smarter – because he offered them everything they wanted. And they fought back – Hal because he missed his friends and was sick of letting everyone down, Alex out of a sense that she wasn’t allowed to be happy, and Tom because he’s Tom and will always do what he knows is right. 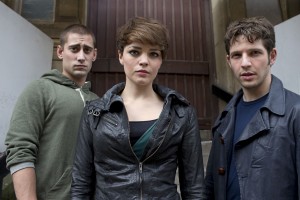 Of course at the end they defeat the devil and end up human, for real.

Which, when you think about it, fits the show all over again. You never know. You do your best. You try to be who you are and to improve on that. You strive to, well, be human and you do it with others alongside you. You help them, they help you and we all lift each other up to something better than we were before.

And over five years we got 36, 58-minute long wonderfully funny, shocking, action-filled episodes that worked to teach us that simple lesson:

You are who your friends help you to be.