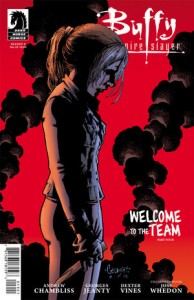 As the magical council fires Buffy & Co from their mission, our Slayer heads back to earth to get help from the scoobies. Here is the fourth part of “Welcome to the team”, this review contains spoilers.

Right, let me start off by apologising for the horrible title for this review, pretty please with a cherry on the top don’t think I am a Twilight fan (not the Twilight in season 8 either to be honest), but the truth is, Dawn is breaking, she is not doing well at all. Like I suggested in my last review, with magic gone from Earth the magic that was holding Dawn together is leaving her and she is crumbling apart. Xander and Andrew’s plan of putting her consciousness inside the buffybot isn’t really working either. So poor Dawn, but at least Buffy is back with her now, fighting in her corner.

Rewinding a few steps back, Buffy, Koh and Illyria get the sack by the red balloon from the magical council (told you that scarlet piece of latex was bad business), their mission failed, the Siphon took Illyria’s power and left her less blue. Buffy helpfully offers to colour her hair (awwww female beauty product bonding in the middle of another apocalypse). Illyria is a bit miffed to say the least, she is also confused at how she is still alive and not dead like all other demons the Siphon has munched on. The gang decides to head back to Earth where Buffy finds out about Dawn. When they try to understand Dawn’s situation and explain it to the newcomers they do manage to muck up their facts a bit. As Buffy is explaining about how Dawn was made (monks made her from mystical energy to hide her from Glorificus) they refer to Glory as a demon, hinting Illyria should know her as they might have fun in the same circles. Excuuuuuse me but I thought the tricky thing about Glory was that she was actually a god and no demon…anyway *sigh*.

For Buffy now the penny drops as she understands that Dawn is dying due to her killing the seed. Xander is rather royally pissed off with her because of this, as she rightfully defends herself saying it was bye bye seed or bye bye world as we know it. Xander tells her yes, fine, this is true, but if it wasn’t for you bonking Angel and giving birth to a whole new universe we wouldn’t have been in that predicament in the first place. Poor Buffy, she really has the world on her shoulders. Xander still has the hump and says he is going to help Dawn without Buffy’s help, but our slayer is adamant, she will help her sister.

So what is the Siphon up to? Well he has turned blue haired which suits him because our renegade naughty punk slayer now seems to be his best friend. We also find out in this issue that dear Simone has been playing Doctor Mengele trying to create a super slayer zombie hybrid by letting her slayer followers be bitten by zompires. She is not too happy with the result, but she is hoping to apply this to herself one day. The Siphon has travelled to her to offer her a deal, she helps him get more power and he will let her be the only vampire left alive.

Last but not least (actually and least if I should be honest) Billy and Buffy’s roomate-who-is-actually-a-slayer are continuing bonding. They are trying to figure out what happened to Buffy, oblivious to the fact that she is back, whilst sitting in Dowling’s hospital room. Oh yeah Dowling, I’d forgotten about him. He is awake for a bit and tells Billy about the whole hybrid-slayer-zompire thing. I guess the fact that I had forgotten about him altogether doesn’t bode well does it?

So quite a lot of things going on in this issue. I liked it, I can see it is now moving towards a Willow reunion as well, hopefully forcing the disbanded scoobies to work together, they are as we know strongest when they are together and rather lost when they are apart. The artwork still feels a bit so-so, I do think Jeanty struggles with the likenesses of the characters and what is up with all the potato-like noses? But all in all it is a good issue, I just want the internal fighting to stop and the teamwork to start!