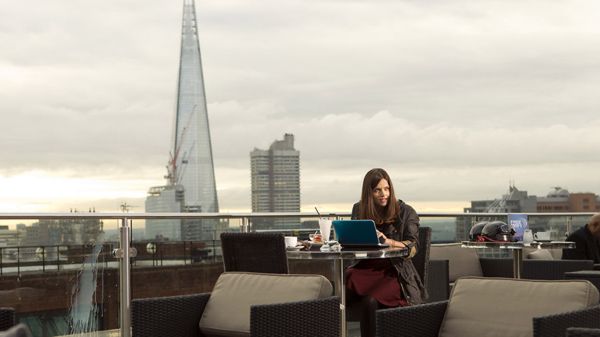 After all the news, pictures, previews, and a prequel we finally find ourselves at the mid-season premiere of Doctor Who.  “The Bells of St. John” marks Jenna-Louise Coleman’s first outing as an “official” companion and the beginning of the mystery behind “the woman twice dead.”

This is a long recap & review, but keep reading because after the review I’ve gathered a TARDIS-load of quotes for your amusement! 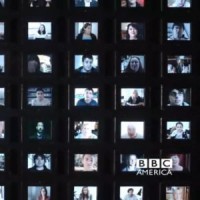 The episode opens with a video image of a young man warning viewers to stay away from wifi networks that have strange symbols for a name.  He says if you connect to one of them your soul will get trapped in the wifi and your body will die.

While it looks like he’s sitting in an ordinary room, the young man says, “I don’t know where I am.”  The camera zooms out from the man and we see that he’s just one of hundreds of screens on a black wall, each with a person in the same situation.

This is a warning from all those already taken…but taken by who, or what?

Now it’s the year 1207 at a monastery in Cumbria.  A monk tells the Abbott the bells of St. John are ringing.  They go to a hooded figure and relay that information.  The mysterious man is the Doctor, of course.  In the room is a portrait of Clara Oswald.  The Doctor retreated to the monastery for solitude so he could try and figure out the mystery behind her.

Flash forward to the present day.  The third incarnation of Clara is a governess for the children of a family friend.  One of the children, Artie, is holding a book.  We see it’s called “Summer Falls” written by Amelia Williams.  There’s also a sly reference to the Doctor’s current incarnation when Artie says he’s on chapter ten and Clara tells him, “Eleven is the best.”

Clara’s having trouble connecting to the family’s wifi so she calls a support number given to her by an unnamed woman in a shop.  The number and the titular bells of St. John are both related.  It’s the TARDIS’ emergency phone in the door.  The name comes from a patch on the TARDIS door that says, “St. John Ambulance.”

The Doctor answers and Clara says she can’t find the internet.  He says click on the wifi and pick a network she recognizes.  Clara asks the daughter for the password and she says it’s “RYCBAR123.”  As Clara types it out she makes up a mnemonic phrase that the Doctor, and the audience, immediately recognizes, “Run you clever boy, and remember.  One, two, three.” 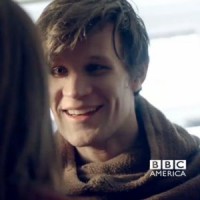 The Doctor freaks out causing Clara to type the wrong password.  She picks another network, one with those strange symbols.  Now Clara’s part the wall of screens!

Frantic knocking at the door brings Clara down the stairs.  How?  Isn’t she in the wifi?  Anyway, it’s the Doctor in monk robes, ecstatic to see Clara.  She doesn’t recognize him.  There’s a fun round of banter between the two of them involving the phrase, “Doctor who?”

The scene changes to that black wall of screens.  It’s in a large control room headed up by a Miss Kizlet.  One of the workers, Alexei, says they have a lock on Clara who’s very clever, but has no computer skills.  Miss Kizlet says to upload her anyway and splice her in a computer skills package.  Another worker, Mahler, worries they’re moving too fast and will get noticed.  Miss Kizlet pulls out a tablet that has an interface for controlling the employees.  She moves the slider for Mahler’s conscience all the way down.

Back at the house, Clara is still at the front door when she hears something upstairs.  A young girl walks down the stairs.  Just as Clara realizes the girl looks like the one drawn on the cover of “Summer Falls” the girl’s head begins to turn 180° revealing a spoon-shaped indentation at the back. 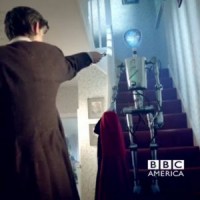 Outside, the Doctor hears Clara through the front door’s intercom system saying, “I don’t know where I am!” so he uses his sonic screwdriver to get inside.  Clara’s on the floor unconscious, her image displayed in the spoonhead’s, um, spoon.

Using his sonic on the spoonhead the Doctor shuts down its camouflage system revealing a robotic wifi base station.  He reverses the downloading of Clara’s consciousness, thus saving her.  At the same time, he sends a message to Miss Kizlet that says, “Under my protection – the Doctor.”

Clara wakes up after dark with no memory of what happened to her, just that she was scared.  The Doctor is waiting outside the house and Clara goes out to meet him.  He explains that something in the wifi is harvesting human souls, hacking people and rewriting them because now Clara knows a lot about computers when she knew nothing before her ordeal.

Soon, lights start going on in all the homes and a spoonhead appears across the street.  Clara notices all the lights in London going off and a plane flying out of control toward them.  They both dash into the TARDIS, cue obligatory expressions of bewilderment from Clara, and the Doctor materializes the blue box inside the plane.  Everyone on board is unconscious because of the wifi so the Doctor disables it and the pilots regain consciousness in the nick of time. 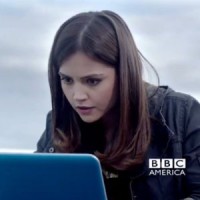 The Doctor takes the TARDIS forward to the following morning.  He and Clara ride a motorbike into London and stop at a coffee shop to try and find the location of the operations center.  Clara, with her new-found computer skills, manages to find the location and identify the workers by using their workstation webcams and an image search across social media platforms.  They’re at Shard.

Meanwhile, Miss Kizlet speaks to the Doctor through random people in the coffee shop by using her tablet.  She can hack anyone with wifi once they’ve been exposed long enough.  The Doctor approaches Clara’s table, but he’s acting odd.  His head rotates all the way around.  It’s a spoonhead camouflaged as the Doctor and this time it completely downloads Clara. 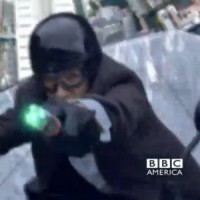 The Doctor heads for the Shard on his motorbike.  Since it was the one he rode in the Antigrav Olympics 2074 it can ride right up the side of the building and into Miss Kizlet’s office.  He demands she download everyone into their bodies.  Naturally she refuses so the Doctor uses her own weapons against her.  This “Doctor” is the very same spoonhead that uploaded Clara and it uploads Miss Kizlet.

Now she has no choice but to order the mass download.  Mahler says they shouldn’t do it, but the Doctor uses Miss Kizlet’s evil tablet of influence to amp up his obedience.  Alexei starts the download that frees up everyone including Clara. UNIT storms the command center.  Miss Kizlet is in her office informing “the client” of what has happened.  We learn that the mysterious client is the Great Intelligence and he tells her it is time to “reduce.”  She executes the “Restore Factory Settings” command and everyone in the command center, including herself, has all memory of their time being controlled by the Great Intelligence wiped from their minds.

When UNIT breaks into her office they find Miss Kizlet sitting on the floor.  Bewildered and in a little girl’s voice she asks, “Where are my mummy and daddy?”  She’d been under the control of the Great Intelligence for most of her life.

The Doctor parks the TARDIS outside the house where Clara is staying.  When she enters he offers her the chance to go anywhere and anywhen.  Walking out, she says come back tomorrow and she may just go along.

“Right then, Clara Oswald.  Time to find out who you are!”

This was a very lighthearted episode that never had any real sense of danger in it, but then again that was the intent, I think.  This episode was meant as an introduction to the contemporary Clara Oswald, her third incarnation, and as a set-up for the larger mystery of who she is.

It was a fun romp filled with even more clever quotes and witter banter than usual.  Jenna-Louise Coleman makes a wonderful companion.  It’s obvious she and Matt Smith have a strong rapport and great on-screen chemistry.

I think the second half of season seven is going to be an exceptionally fun ride.

Clara:  What chapter are you on?
Artie:  Ten
Clara:  Eleven is the best.  You’ll cry your eyes out.
Clara:  Why don’t I have the internet?
The Doctor:  It’s 1207.
Clara:  I have half-past three.  Am I phoning a different time zone?
The Doctor:  Yeah.  You really sort of are.
Clara:  Doctor who?
The Doctor:  No.  Just the Doctor.
Miss Kizlet:  I’m ever so fond of Alexei, but my conscience says we should probably kill him.
Mahler:  I’ll inform HR.
Miss Kizlet:  Actually, he’s about to go on holiday.  Kill him when he gets back.  Let’s not be unreasonable.
Clara:  When you say ‘mobile phone’ why do you point at that blue box?
The Doctor: Because it’s a surprisingly accurate description.
The Doctor:  Right.  Don’t be a monk.  Monks are not cool!
The Doctor:  I fixed that rattling noise in the washing machine, indexed the kitchen cupboards, optimized the photosynthesis in the main flower bed and assembled the quadracycle.
Clara:  Assembled the what?
The Doctor:  I found a disassembled quadracycle in the garage.
Clara:  I don’t think you did.
The Doctor:  I invented the quadracycle!
The Doctor:  Human souls trapped like flies in the world wide web.  Stuck forever.  Crying out for help.
Clara:  Isn’t that basically Twitter?
Clara:  What is that box, anyway?  Why have you got a box?  Is it like a snogging booth?
The Doctor:  A what?
Clara:  Is that what you do?  You bring a booth?  There’s such a thing as too keen.
The Doctor:  I’m the Doctor, I’m an alien from outer space, I’m a thousand years old, I’ve got two hearts and I can’t fly a plane! Can you?
Clara:  Okay, when are you going to explain to me what the hell is going on?
The Doctor:  Breakfast.
Clara:  I ain’t waitin’ ’til breakfast!
The Doctor:  It’s a time machine.  You never have to wait for breakfast.
The Doctor:  You’re young.  Shouldn’t you be doing young things with young people?
Clara:  What, you mean like you, for instance?  Down, boy!
Clara:  Clara Oswald for the win.  Oswin!
Clara:  Is this actually what you do?  Do you just crook your finger and people just jump in your snog box and fly away?
The Doctor:  It is not a snog box!