Enders, frustration and bromance – A review of Angel and Faith #20 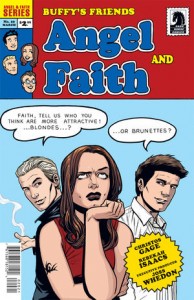 Angel is in a confused vegetable state, so it is up to Spike and Faith to try and save him. This edition of Angel and Faith actually had me laughing out loud on several occasions. This review contains spoilers.

Right I have to start of by saying how awesome is the Rebekah Issacs cover of this issue? Love it! So last time we visited the happy bunch in London, Angel was so full with souls that he turned into a gibbering, confused entity. Alasdair, the poor man’s Giles, informed Faith and Spike that they will need to get Giles’ soul out of Angel’s body, as it is wreaking havoc with him. A little known fact is that Angelus likes to torture Giles. Duh!

Anyway, after umming and erring a bit on how to do this, Faith and Spike set off on an adventure to find some soul eating enders. This is when it gets really good. Spike decides to try it on with the Slayer, telling her they have always had chemistry. Faith, however, doesn’t want to be his rebound girl, and instead tells him he isn’t over Buffy and he is turning into Angel. She continues to tell him that he and Angel have a bromance going, saying they can’t stand each other yet still spending so much time together. Because they are the only ones that understand each other, they are both Vamps with souls, hung up on Buffy fighting their own kind. This makes Spike so crazy mad that he hacks through a whole bunch of enders in pure anger and frustration. Job done, Spike wonders if Faith was planning to get him mad all along just so he wouldn’t worry about the soul sucking creatures, but no, she was giving him some tough love and home truths.

When they get the device they need to store Giles’ soul, they go back home to Giles’ former abode. Spike tries his luck with Giles’ great aunts, but he even gets the brush-off from them. Poor frustrated Spike grabs a bottle of absinthe and goes off for some quality time with Angel, who is locked up in the basement while the others are trying to drive Giles’ soul out of Angel. They are doing this by telling him how much the need him, Faith telling him she “needs G wicked bad”.

Back in the basement, a rather tipsy Spike is asking Angel how the heck he could move on after Buffy. He says that he got his soul back to become the man Buffy wanted, but then wasn’t enough anyway. This dialogue – well, actually, monologue, as Angel is out of it for most of it – is very good. It hammers home the reasons why I think Spike is so much more the man for Buffy than Angel. Spike went out and got a soul to change after behaving like an ass. But still Spike without a soul behaved far less like an ass than what Angel without a soul ever did. Angel was cursed with a soul; Spike fought very hard to get his. Buffy could rely on Spike when he was soulless; Angel without a soul killed, maimed and tortured. I could go on and on…

Anyway, Spike finishes his speech with telling Angel he would give anything to find out out how Angel got over Buffy. Angel picks this moment to regain his sanity and tells Spike, that when he does get over her, he will tell Spike how he did it. Angel sane, means Giles soul out of his body and into the soul container. All is good.

The issue ends with a naked Spike in post coital bliss. With whom, you ask? Well maybe I won’t spoil that. I’ll let you find out for yourself. But needless to say he is a happy boy. Faith and Angel on the other hand are disgusted, and Angel says he will take her out for breakfast. When she suggests that he will burst into flames, he simply replies “good”.

Angel and Faith is really so much better than Buffy at the moment. Buffy has been a bit up and down all through season 9, but Angel and Faith is consistently great. The artwork is far superior, and the storylines likewise. I almost wish that you could just bring Buffy in to this comic instead. If there is a season 10 coming up, they should definitely just keep on going in Angel and Faith mode as they are onto a winner there.