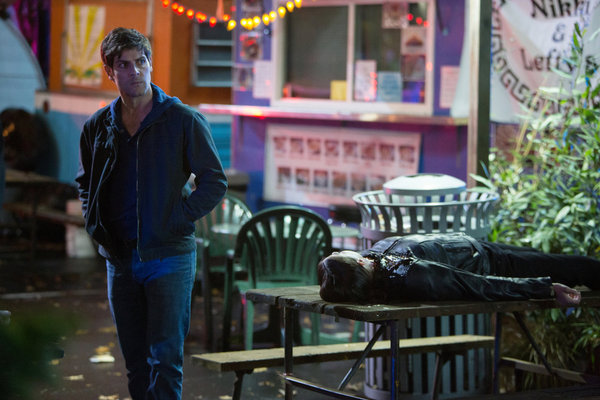 Nick has just found out that Renard is the one Juliette is now involved in, and he’s a little upset. Monroe tries to keep him from leaving, but then Nick’s phone rings and he’s being called to the scene of four homicides – the four homicides he and Monroe just committed. He arrives and finds Captain Renard and Sgt. Wu there, then calmly discusses the scene and the tattoos on the palm of each of the bodies. Renard asks him if the tattoos mean anything to him, and Nick says yes – the same tattoo was on the palm of the victim in an earlier case. While they’re there, Renard gets a call from a sobbing Juliette, who’s confused and upset because Nick has moved out. Once they finish up, Renard heads to Juliette’s house – with Nick following. 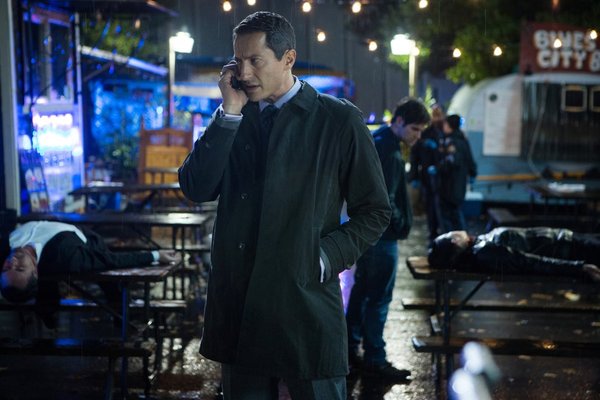 Meanwhile, Rosalee calls Monroe and they discuss the Juliette/Renard problem. She has good news – she’s coming back on the morning bus and she thinks she knows how to fix things for Juliette, Renard and Nick! Just as Nick is about to follow Renard into the house, Monroe calls and tells him what Rosalee said and that he hopes Nick isn’t about to do anything crazy. Nick apparently hears the voice of reason and goes back to Monroe’s house.

Back at Juliette’s house, she and Renard are…fighting? Having sex? Both? Lamps are broken, Juliette slaps Renard repeatedly, she rips his clothes, he rips hers, he almost turns into a Hexenbiest… and then she shoots him, grazing his forehead. She then shoots a few more times, deliberately missing him but making her meaning clear. Renard gets his gun and runs out of the house, escaping just before Sgt. Wu and other officers arrive.

Nick gets another call from Sgt. Wu, this time about the shots fired at his house – and the fact that Juliette won’t talk about what happened. After Nick arrives, Juliette whispers a few things to him, but he tells Wu that she hasn’t said anything and asks that he write up the report as her having thought she’d seen an intruder. However, Nick whispered one important thing back to Juliette – that he knows who he is. She’s clearly shocked that he’s found out.

Renard heads to the station and has Adalind released. She doesn’t know who did it or why, but she’s afraid as she leaves the precinct. Renard shows up out of nowhere and says that they have to talk. They get into his car and he drives to a wooded area near a lake and tells her that she has to fix what’s wrong with him. She tells him that she can’t because she doesn’t have her powers anymore, but she can help. She begins to seduce him, and then tells him that she wants him as he “really is, the way you can’t be with her.” Renard turns into a Hexenbiest, and Adalind finally gets what she wants.

In the morning, Nick and Monroe – and a large bouquet of flowers – are waiting at the bus station for Rosalee. Monroe is nervous about the flowers, but Rosalee walks right up and kisses him and then notices the flowers. Next she notices Nick and says they have to get to the spice shop right away. The three begin looking through the various potion books, and Monroe finds the one they need – but there’s a problem. They no longer have the cat that poisoned Juliette in the first place, so that means a more difficult way of doing things. Nick is about to drink the purification potion when Hank calls – he’s out of the hospital and he just saw Renard pawing through Nick’s desk. Nick rushes to the station, but it’s too late: Renard has the key. Nick is trying to leave, but Hank wants to go with him and keep him from doing anything stupid. Nick tells Hank that this is between him and Renard, and Hank needs to find Adalind. Before Nick can leave, Renard calls him and tells him they need to talk.

Nick and Renard meet up at the house where Nick had his first Grimm case – the one where he met Monroe and with his help, found the Blutbad who was killing people.  Renard wants to talk, but Nick wants to fight – so they do. They occasionally pause and Renard tells him that yes, he’s known who Nick was since his aunt died. Nick retorts that Renard tried to kill her, and Renard doesn’t deny it – he says that it wasn’t about her, it was about the key. A few more punches and Renard tells Nick that he came here to give the key back to him – at which point he throws it to Nick. Nick catches it as Renard continues, explaining that he could die or Nick could die, and it wouldn’t stop what’s happening. But if they work together and keep Adalind from getting the key, they might get somewhere. Nick then asks about Juliette, and Renard says he’d fix it if he had a way. Nick tells him that there is a way, and they leave together, both a little beaten up but alive.

Juliette opens the door to find both Nick and Renard standing there, then all three head to the spice shop. Once again, Rosalee mixes up the purification potion for Nick, which is step one. He drinks it and is fine at first – just as Renard was when he drank it. But the pain and convulsions begin, worrying the other four watching him. Will he survive the potion?

The final scene shows us Adalind, who’s made it back to Vienna, standing in a bathroom holding a positive pregnancy test. 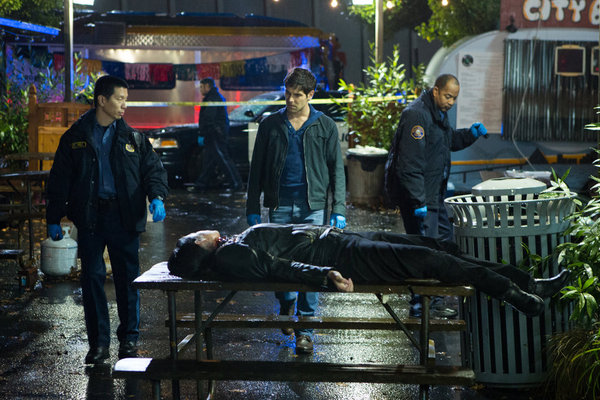 Grimm is back from hiatus with a BANG! There were so many confrontations and revelations in just an hour!

So Juliette and Renard – winners of the weirdest “love” scene ever award? I think so! Interesting that they could both come thisclose to giving in to the potion and yet, they both fought it. Renard had more knowledge and reasons to fight it, but Juliette – who doesn’t have a clue about the Wesen world or what’s happened to her – is the one who really stopped it. Things that make you go hmmm…

I have to admit, I was hoping Nick would drink the potion and not have the nasty reaction to it like Renard had. Surely Nick is a little more pure than Renard? I’m sure he’ll survive the process because there isn’t a show without him, but will the rest of what Rosalee has in store for the three of them work?  Will Juliette remember Nick again?  Will the weird lust thing between Renard and Juliette be gone?

In much happier news, Rosalee is back and back with Monroe! Poor Monroe is still pretty nervous, but it seems clear that Rosalee can lead him as needed until he’s comfortable. Here’s hoping things start progressing with them. Maybe Wesen tend to move slowly when it comes to matters of the heart?

And then there’s Adalind. You have to give the girl credit – Nick may have taken her powers away, but she hasn’t been sitting around wallowing. She’s been trying to do anything and everything she could to get back at Nick, Renard and anyone else who has messed with her. But getting pregnant – that’s one hell of a Machiavellian twist. The obvious baby daddy is Renard, but could it be his brother? We only know for certain that she was intimate with Renard, but that doesn’t mean she wasn’t with Eric, too. No matter which one is the father, Adalind has an amazing bargaining chip. Neither one will want to kill her for at least 9 months, and if she plays her cards right, whichever one is the father will then protect the baby and possibly her, too.

So who can’t wait to see what happens next?!