A man in an old Cadillac pulls up outside a church. He’s in some kind of pain and takes a handful of pills, then makes his way inside. There’s a grief group meeting, and he listens to a young woman, Molly, talk about her recently deceased brother while she cries. He then gives his name as Andre and tells the group about his wife, who’d died from cancer. After the meeting, he strikes up a conversation with the woman, then offers her a ride home. Molly makes coffee for the two of them, but soon begins to cry again. Her tears cause Andre to morph into a Jinnamuru Xunte – a bee-like creature with a long proboscis tongue – and he blows red dust into her eyes, blinding her. He then licks the tears off her face and runs off. Molly panics in her new blindness and accidently pulls a heavy bookshelf down on herself, ultimately dying from being crushed. 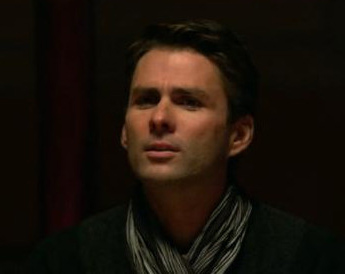 That night, Monroe, Rosalee, Hank and Nick are having dinner together and discussing Renard. Rosalee makes the connection that although Renard is half Royal – and because he’s also half Hexenbiest, the Royals won’t accept him. They think this is why he gave the key back to Nick – he wants Nick on his side… but what Renard’s side really is and what he wants is still unclear.

The next morning, Hank and Nick are met at Molly’s apartment by Sgt. Wu. They move the bookshelf to look at her body and are startled by how red and awful her eyes look. They also find a note about a grief support meeting in her phone, so they go to the church to talk to the group leader. All he knows is that the new guy’s name was Andre and he had an Australian or South African accent. Dr. Harper calls them to the lab, where she tells them that Molly suffocated because her windpipe was crushed, but what appears to be sand on her eyes are actually parasites. Dr. Harper recognizes them, but it doesn’t make any sense because the parasites come from flies that only exist in sub-Saharan Africa. 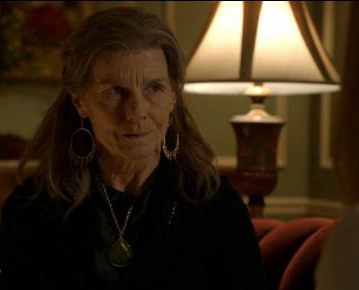 In Vienna, Adalind is visited by another Hexenbiest, Frau Pech, who immediately is able to tell what Nick did to her. The older woman is also able to tell that Adalind is pregnant. Adalind tells her that the father is one of two half brothers, both of whom have Royal blood. Frau Pech says that the child she is carrying will be worth a great deal, and Adalind says she hopes that the Frau will help her with that. Frau Pech tells her that it would be her honor.

Andre hits another grief support group and goes home with another young woman, who he attacks in the same manner. This time, however, her sister comes home while Andre is still there. She hears her sister screaming and gets into the house just as Andre leaves. Nick and Hank arrive just after Sgt. Wu and speak to the victim’s sister – she didn’t really get a good look at the guy, but she saw his very distinctive car as it sped off, so they put out an APB on the car. Hank says they should have Dr. Harper check on the victim at the hospital to make certain they’re dealing with the same parasitic infection.

Juliette goes to the spice shop to talk to Rosalee, asking what she’d given her and if there were side effects. Rosalee asks what she’s feeling, and Juliette admits that it’s not what she’s feeling, but what she’s seeing and hearing. She describes it briefly and Rosalee suggests that she come over to Juliette’s house to check it out. Juliette readily agrees because she doesn’t want to be alone. They arrive at the house and Juliette goes into more detail about the floor disappearing and the ghostlike figure she’s been seeing and the voices she’s been hearing. Then she asks Rosalee what kind of spice shop she’s running. Rosalee describes it as a shop with alternative medicines for illnesses that don’t respond to traditional treatments. Juliette then hears something that Rosalee can’t, and next she sees the ghostly figure and follows it up the stairs. Rosalee doesn’t see anything, and Juliette states that she’s losing her mind. Rosalee puts an arm around her and tells her that she’s not.

Renard is asleep and suddenly wakes up. He turns over in bed and is shocked to see Juliette there. He tells her she shouldn’t be there and she needs to leave. She says, “I’m trying,” and then turns into a hideous creature and demands that he kiss her like he did before.

In the morning, Nick and Monroe are at Aunt Marie’s trailer trying to find information on the creature they’re up against. Hank arrives with coffee just as they find the right entry. They read about this Wesen, which they now know is called a Jinnamuru Xunte and was in Kenya. According to Nick’s ancestor, the creature is addicted to human tears and will revisit his victims to feed off the tears of their family members. Dr. Harper confirms that Kelly, the second victim, has the same parasite and they’re growing. Nick and Hank stop by the hospital to talk to Kelly, but her sister, Casey, tells them she’s asleep. They’re still talking to Casey when Kelly wakes up screaming in pain, her eyes now completely gone. Nick then gets a call from Sgt. Wu – they’ve found the Cadillac.

Hank and Nick rush to the address, which turns out to be a school where yet another grief session is being held. They see Andre leaving with a woman, but once they start after him, he turns and runs back into the school. Nick, Hank and Wu split up, searching on different floors, but Nick finds Andre. He’s trying to put the handcuffs on him when Andre turns and blows the red dust into Nick’s eyes, blinding him and allowing Andre to escape out the window, where he carjacks a passing motorist and flees the scene. Hank wants to take Nick to the hospital, but Nick tells him to call Monroe and Rosalee instead. 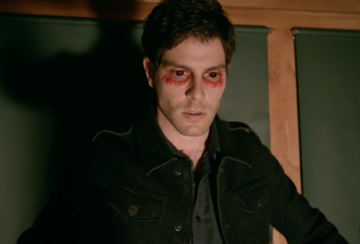 Rosalee and Monroe start on the research before Nick and Hank arrive, but it doesn’t look good. The parasites have barbs, so they can’t just be washed away. Once they arrive, Rosalee has Nick lay down and then puts a lamp in front of him, telling him to keep his eyes open – the parasites grow faster in the dark. Then Rosalee discovers the only cure – they have to find the Jinnamuru Xunte alive and cut out one of his eyes, which is the only place the antibodies exist. Nick’s hearing has become amazingly better due to his sudden lost of sight, and when Hank gets a call from Wu about where the Jinnamuru Xunte ditched the stolen car, Nick knows just where he’s going – after Casey, just as the book suggested. Only Hank and Monroe were going to go, but Nick insists, so Rosalee comes too, bringing all the ingredients needed for the cure.

Nick’s right – Andre attempts to sneak up on Casey, but she covers her eyes and kicks him off her body. He comes at her again, but right then Hank starts knocking on the door. Andre runs off and Hank breaks down the door, telling Casey he’s going after him. He goes out the back door and finds Monroe, but no Andre. Meanwhile Nick has insisted on going inside anyway and Rosalee is reluctantly helping him. When they get in the house, Nick can hear that Andre is up in the attic. He sends Rosalee to get Monroe and Hank and heads up the stairs carefully. Rosalee nearly runs into Casey, who’s holding a huge knife, but then is able to get Hank and Monroe. Nick, meanwhile, fights Andre despite being unable to see, and manages to get him in a stranglehold until he passes out. The others come up and Monroe quickly removes one of Andre’s eyes, which Rosalee mashes with the other ingredients to make a paste. She smears the paste on a cloth and puts it on Nick’s eyes. Andre then wakes up, staggers around half-blind and falls down the stairs, where he’s met by Casey and her knife.

Juliette again sees the ghostly apparition, but this time she’s mad and yells at it – and it forms into something – someone – she recognizes: Nick. Meanwhile, Nick, while blindfolded, is hitting melons thrown by Monroe with a baseball bat and he doesn’t miss one. It seems he gained something from his experience with the Jinnamuru Xunte. 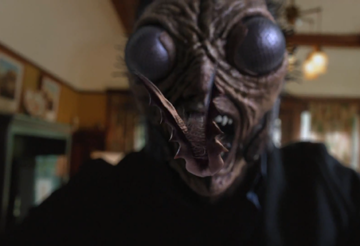 Another wild episode – but this one gets extra bonus points for grossness! Grimm usually has some amount of ick, but this one – from the nasty tongue to the icky parasites to eyes being eaten to scooping out a big bug eye with a spoon – YUCK!!! But I digress… onwards!

Thank goodness Juliette went to see Rosalee. Maybe there aren’t any answers yet, but her spirit was coming back by the end of the episode. Here’s hoping Rosalee – or maybe Nick? – is able to help figure out what’s going on, and we’ll get to see Juliette back to her former kick-ass self sooner rather than later. It really does seem that these hallucinations are a sign of her memories of Nick coming back… will that still be a positive? Will she remember learning about the Wesen world? At least she doesn’t seem to be thinking of Renard at all anymore. Speaking of…

The only time we see Renard in this episode is when he has that bizarre nightmare about Juliette. Perhaps it was the potion’s way of making sure he really won’t ever want her again?

It was good to see Monroe and Hank working even more closely together, and since the four of them had dinner, Hank is clearly part of the group. It’s no longer Nick and Monroe against the world, which is a big positive – especially when once again, Rosalee ultimately saved the day! Together, the four of them can tackle things much better, combining their various knowlege and experience.

And Adalind… what a conniving piece of work she is. This latest development is no surprise, but I definitely wonder just how Frau Hexenbiest, I mean Pech, will be able to help her. And will Adalind be willing to find out which Renard is the daddy? Can you do a paternity test when there’s Hexenbiest blood in the mix? It’s going to get interesting, that’s for certain!