Back at the spice shop, Nick is still passed out after drinking the purity potion, and Juliette is still freaking out. Monroe tries to calm her by explaining that they’re attempting to fix a “phermonal imbalance,” and Nick is doing this for her. Nick’s color suddenly goes back to normal and he wakes up thirsty. Rosalee rushes Juliette and Renard into the next room and starts the potion the two of them need to drink that will hopefully finish off the spell. Meanwhile, Monroe pricks Nick’s finger to get some of his blood and then brings it to Rosalee as the final ingredient – without telling Renard and Juliette what it is. She gives them each a cup to drink, but nothing happens. Now they have to wait and see. Juliette storms off and goes home by herself, but Nick follows her without being seen and watches the house. But once Juliette goes in, she nearly falls into a gaping chasm where the living room floor used to be. She tries to get out of the house, but the door’s locked. Apparently the potion is causing hallucinations.

The next morning, Monroe is visiting his bank when suddenly a robbery occurs – a robbery with a very unusual twist. The three gun-toting robbers are Wesen – fully morphed Wesen. Monroe is shocked, because they’re breaking the long-standing Wesen code of conduct not to show themselves morphed to humans. The robbers get the money they came for and escape easily before the police arrive. 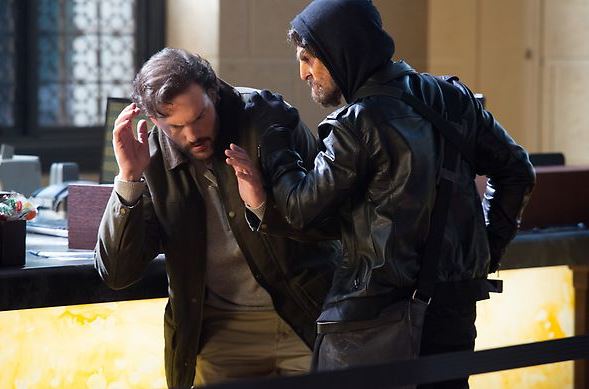 Meanwhile, Nick and Hank are sitting in a diner as Nick explains the importance of the key, as well as Renard’s role in things as a Royal and part Hexenbiest. He then tells Hank that he’s wearing the key around his neck from now on – if anyone wants it, they’re going to have to kill him to get it. Hank asks about Juliette, and Nick says he doesn’t know and that he’s trying to give her space. But back at the house, Juliette has spent the night sleeping against the front door. The chasm is still there, and when she tries to go upstairs, the stairs seem to go on forever, so she’s trapped.

Nick and Hank are called to the bank to investigate the robbery. The officers on scene tell the pair that there were three robbers, heavily armed and wearing realistic-looking masks. Monroe manages to catch Hank’s eye, so Nick and Hank head over to talk to him. He explains that this is bigger than just a bank robbery – these Wesen have broken the most important law of honor the Wesen world has, the Code of Swabia. By revealing themselves to humans, these three Wesen have put the entire community in danger. Monroe suggests that Nick may have information on this in Aunt Marie’s trailer, so the three head there. 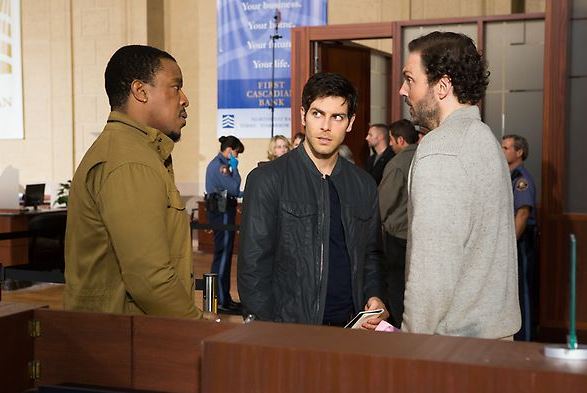 They soon find a passage in German that Monroe reads – it confirms that the law was set down in the 1500s. Monroe tells them that the witch hunts that took place weren’t about witches but Wesen who’d revealed themselves to take advantage of humans, and he thinks it could happen again here if these three aren’t stopped. Plus, the Wesen community will freak out, but he might be able to learn something by talking to other Wesen. Someone may know something about these two Blutbad and the Skalengeck.

Juliette’s phone rings and as she tries to pull it out of her pocket, she drops it down the gaping hole in the floor.

Nick and Hank are back at the station when Sgt. Wu brings them reports on two other robberies where the culprits were wearing animal masks. Captain Renard then calls Nick into his office. Nick immediately asks about his feelings for Juliette, and Renard tells him that they’re not as strong as before – and that he’s grateful. He tells Nick that he shouldn’t take it personally since he knows the situation, and Nick says he’s trying. Renard then tells him that he wants the two of them to be able to work together, since there is much more going on than Nick is even aware of yet. Nick asks about Adalind and why Renard didn’t give her the key so she could give it his brother, and Renard tells him that he didn’t because he trusts Nick more than his family. He also tells him that the Royal families will stop at nothing until they have the keys… and Nick.

Monroe calls Nick and tells him about the Junkyard Dog Bar, a hangout for “less than legitmate” Wesen. He believes the people there might have information. Nick tells him not to do anything until he and Hank arrive. Monroe then tells them that it’s a Wesen-only bar and you have to morph as ID. He has to go in alone, but swears that if anything goes wrong, he’ll come right out the front door. Monroe goes in and starts to loudly ask if anyone knows anything about the Wesen who did the robberies, but he’s mostly ignored or told off. Unfortunately, the three robbers are in the bar, and they recognize him from being at the bank. A fight breaks out, and Nick and Hank rush in to break it up. The robbers lie about what started the fight, and since no one wants to press charges, Nick and Hank tell everyone to go home. Monroe is out before them and calls Nick to tell him that he’s heading to the spice shop and he should come by, because those three were the robbers.

Meanwhile, Juliette is still stuck at the bottom of the stairs of the house. The hole is now shooting sparks out of it, and she’s even more freaked out. At the spice shop, Rosalee and Monroe are discussing the situation. Nick and Hank arrive and Monroe asks if they arrested the three. They tell him they have no evidence, so they couldn’t – Monroe recognizing them when they morphed isn’t something they can bring to the DA. Monroe then tells Nick that he may have to deal with this as a Grimm rather than a cop, but Nick says there are too many eyes on the case, so they have to try the cop route first. At least they now know the Blutbads’ names – Cole and Krystal – and that they live together. It turns out that Cole, Krystal and Gus have gone back to the apartment to plan their next robbery. 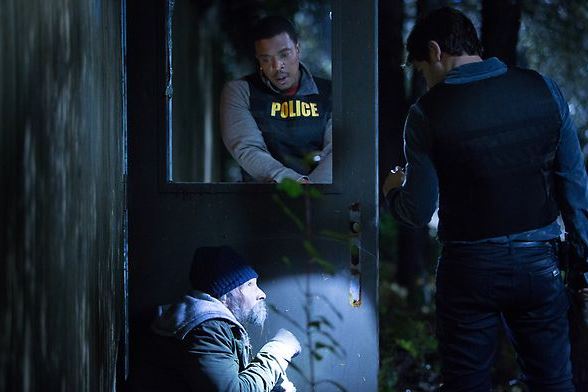 In the morning Hank and Nick head out to the address on file for Cole and Krystal. It turns out to be an abandoned warehouse, where they find a homeless man squatting. He tells that does what the monsters say and he can’t say anything or they’ll cut his tongue out. He does tell them that third man’s name is Gus before he runs off.

The ringing of her cellphone wakes Juliette up from her spot on the stairs. She decides to try to get to it, and takes slow steps forward. The wood slats of the floor go back in place, and it’s Nick on the phone, calling to check on her. She’s so relieved that she thanks him profusely for calling and begins to cry. 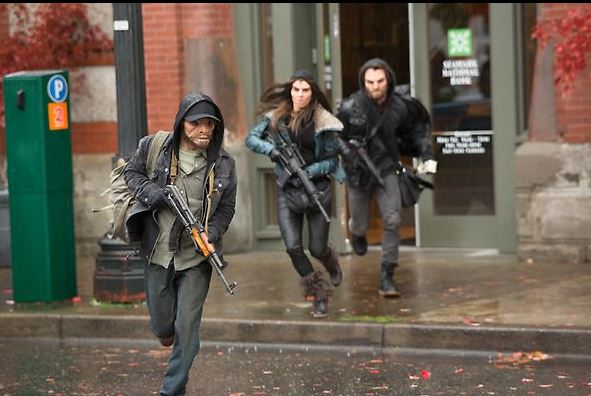 The next morning, Cole, Krystal and Gus hit the new bank, but this time, Cole kills two bystanders as they escape. Back at Monroe’s house, Nick wakes to find Monroe fixing some very odd-sounding pancakes that Nick refuses to try, no matter how healthy they’re supposed to be. Monroe begins to tell Nick about the Wesen Council when Nick’s phone rings – he’s being called to the bank. He heads out just as Monroe’s phone rings – it’s Rosalee, asking that he come to the spice shop to help. The robbers go to the warehouse to hide the cash and their weapons. Monroe arrives at the spice shop to find it full of panicked Wesen – Rosalee’s brother knew how to contact the Wesen Council, and Rosalee tells them that she does, too and shoos them out the door.

Rosalee tells Monroe that her father and her brother both knew how to contact the Wesen Council, and she calls the contact, DeGroot, reluctantly. At about the same time, Renard emails photos of Cole and Krystal to DeGroot.

Back in Portland, Cole and Krystal decide they’ve had enough of Gus and kill him. The police manage to figure out Gus’ last name and get his address, and they head there, only to find Gus’ body. Hoping to catch Cole and Krystal before they leave town, they rush to the warehouse. A shootout and fight happens, but Hank and Nick manage to cuff the two and bring them and the evidence – the money and guns – in to the station. The two keep shooting their mouths off, saying they can’t prove anything. Once they arrive at the station, the two continue talking, insisting that this is only the beginning and there’s nothing Nick and Hank can do to stop it. As they’re walking down the hallway in the precinct, a man steps out of the crowd of reporters and shoots Cole and Krystal point blank. This is how DeGroot handled the problem, and with the press there when it happened, the Wesen community all knew that the problem was over. 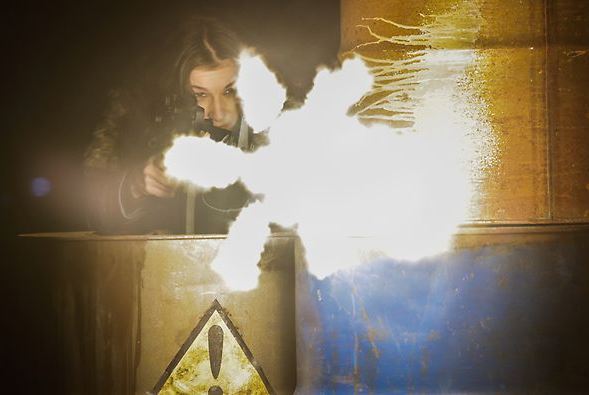 Juliette is woken by an unknown caller saying eerie things she can’t understand, and the floor and her phone are sparking again. The voice slowly becomes understandable, and it says, “I just want you to know the truth.” 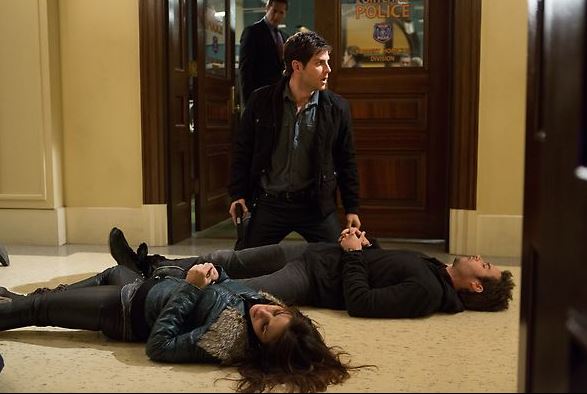 It was another action-packed episode! It was great to find out about the Wesen code and Wesen Council, even though they take extreme measures to get rid of the problem, it’s difficult to see an alternative – especially when Cole and Krystal planned to continue their plans to make Wesen known to humans.

The uneasy truce that’s happening between Nick and Renard is interesting to watch. Hopefully they’re on the road to strengthening their partnership, because it really does seem that the best way for them to fight Adalind, Eric and the other Royals is to do it together.

Oh, Juliette. Why haven’t you called Rosalee or Monroe? Why didn’t you tell Nick what was happening when he called? Isn’t the connection between the potion you drank and the hallucinations obvious? Here’s hoping you do speak up and get some help in the next episode – this is not something you should be trying to deal with alone.

It was great to get deeper into Rosalee’s past and family, as well as see her a stronger character. She’s certainly shown strength in the past, but this was on a different level. Kudos to Bree Turner for some wonderful acting and showing us a different side of her character!

It’s safe to say that the next episodes are going to continue to be intense – be sure you don’t miss a one!