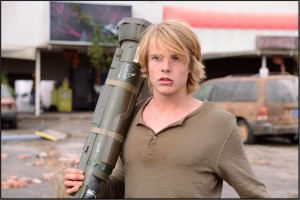 Hey everyone! It’s been quite a while since we last had a chance to watch Revolution, but the spring season is back in full, bloody force! This week’s episode, ‘The Stand,’ picked up right where the winter season left off: with Monroe possessing power again. Tonight, we lost yet another major character, and this one was possibly the most annoying death of all. Caution! Spoilers ahead!

We pick up with Charlie, Miles, Nora, Danny, Aaron, and Rachel fleeing before a cadre of Monroe’s helicopters. They dart into a diner and hide out in the freezer. The choppers fire on the diner and leave, thinking the group is dead. Major Tom Neville, meanwhile, has a meeting with the depressed Monroe, whose best friend Miles just abandoned him. Neville reports a suspicious absence of bodies at the site of the diner fire. Monroe expresses his desire to use his newly acquired power to gain control of the rest of the continental United States. He also issues Neville an order to kill Miles on sight if he’s spotted, a far cry from his attempts to spare his former best friend’s life in the last half of the season.

Meanwhile, our heroes have made it to safety in the woods, where they share a happy reunion between mother and children. Miles also has a passionate onscreen smooch with Nora. Aaron wants answers from Rachel but before she can offer any explanation (which she never seemed inclined to do in the first place) they are discovered by Monroe’s helicopters again. The helicopters, however, aren’t interested in the group–Nora realizes they’re headed for Westchester, where there is a rebel camp. The next scene shows us said rebel camp, where the lovely red-shirt rebels are quickly eliminated by Monroe’s death squadron.

Moments later, the heroes arrive to find the entire camp killed off. Nora immediately wants to head to Annapolis to warn the rebel alliance’s headquarters there. Aaron, meanwhile, feels they have achieved their goal of rescuing Danny and subsequently wants to leave. Rachel feels the need for redemption, though, and wants to help bring power to the rebels to fight back. “Monroe has power. Let’s get some of our own.” Conveniently, Rachel knows a guy nearby who can help. She and Miles embark on a quest to find her while Charlie, Danny, Nora, and Aaron proceed on to Annapolis.

Rachel has a flashback while bidding farewell to her family. She remembers young Danny undergoing surgery to correct his lung disorder–the very procedure that Randall from the DOD had managed to secure for the family in return for selling him the technology to turn out the lights. Meanwhile, Major Neville and son Jason spend some bonding time of their own. Jason is displeased with his father for allowing the helicopters to torch buildings and kill unprepared families. 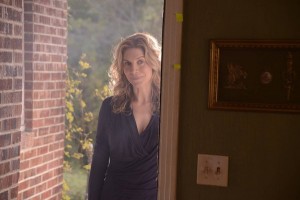 In Annapolis, the group of four meets with the rebels’ commander. They also find Nicholas, the priest from the first half of season one who mysteriously vanished. He’s in Annapolis helping the rebels there. Over with Rachel and Miles, meanwhile, the two start to reconnect. Miles gets very close to Rachel–close enough that Nora would certainly object were she there–but Rachel stops his advances, leaving him visibly disappointed.

Back in Maryland, Jason and Major Neville have stumbled across the rebel headquarters. Jason spots Charlie and immediately refuses to order the airstrike as planned. Neville, enraged, gets into a fist fight with his son and ironically orders him not to come home. Rachel and Miles arrive at the home of Rachel’s associate, John, a nervous and squirrely man with power. He shows them his impressive arsenal of high-tech weaponry that he designed, then reveals to Rachel that he is actually in cahoots with Randall. He betrays the two of them, knocking them out and imprisoning them. Rachel plays up the desperate mother bit while Miles breaks them free and punches John’s lights out. The two make off with some of his weapons, including a hand-held missile launcher.

Charlie, meanwhile, runs into Jason who warns her of the pending airstrike. Though thankful, she orders him to stay away from her, then reports her learnings to the rebels. Without sufficient time to evacuate, they decide to make a stand, hoping Rachel will come through with the high-power guns. Among the front-line volunteers are Nora, Charlie, Danny, and Nicholas. As they fortify, Charlie has a flashback and remembers calming her brother as he had an asthma attack when they were kids. Compelled by this memory, she pleads with Danny to go indoors and not fight. He refuses, though, deciding he should take a stand for their dad and for Maggie.

The choppers come and open fire on the rebels, who fight back with their primitive firearms. Just as all hope seems lost, Rachel and Miles triumphantly arrive with a host of deadly new weapons. Miles takes aim with the missile launcher, prepared to shoot down the helicopter with the amplifier aboard, but is knocked out by shrapnel when the chopper fires on the wall near him. Danny, spying the launcher, seizes the opportunity and shoots the chopper down himself. Without the amplifier, all the helicopters lose power and the backup chopper crashes, but not before they can pump four rounds of lead into Danny’s chest. He drops to the ground in a heap. Despite her best attempts, Charlies is unable to save him. 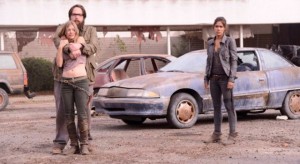 In the end phase, Rachel laments allowing her kids to get mixed up in all this while Randall, who has met up with John, visits Monroe and makes him an offer he can’t refuse–to restore the power for him. Rachel visits her dead son’s body in the morgue and, in a grotesque scene, carves open his side and removes a strange, glowing device from within Danny. Was he a key to this power-outage puzzle all along?

Alright, so that was the mid-season return of Revolution. Personally, I’m very disappointed in their decision to kill Danny. He had a lot more going for him and his death sort of makes the big quest from the fall season seem, well, pointless. I recognize, though, that this may be the push Charlie needs. We can already see her growing more serious, more determined. She swears revenge against Monroe after Danny’s death. Nonetheless, I can’t help but feel a little betrayed at how sudden and unceremonious Danny’s death was. As for what Rachel was up to with shoving her hand up in his side? Who knows? Maybe Danny was a part of the power outage all along? Maybe Monroe had motivation to keep him alive in Philadelphia after all? What do you guys think? Leave a comment down below and don’t forget to catch Revolution every Monday on NBC at 10/9C. Til next week!