Teenagers making out in a car.  Seems like a typical Saturday night, right?  Think again!!  These teenagers are luring in vampires to hunt them, and one of the kids looks very familiar.

Reading about girls who were killed when their throats were ripped out Sam and Dean take off on the hunt for possible vampires.  The police have footage of the teen’s killing the vampire and immediately Dean recognizes the girl as Kristen Chambers, a girl who the Winchesters have crossed paths with before.  They had met her and her dad and convinced her dad to get her out of the hunting life.

The boys track her down to a hotel where they learn she and two of her friends, Josephine and Aiden, are hunting vampires, a nest of them.  Josephine and Aiden enter the vamp’s room where they find a victim tied to the bed and when it seems like they are out of their league Sam and Dean come to the rescue and the vampire jumps out the window.  The kids catch up to him and before Josephine beheads him she accuses him of killing her family and he is insistent that he didn’t.  Dean also notices that the vamp had been trying to get to a blue van that had taken off when they caught up to the vamp.

Dean doesn’t like that Kristen is back in the hunting life, after her dad was killed, and wants to take her to family, but she doesn’t think Victor will like that.  The boys learn that the three of them live with a hunter named Victor, who they have also met, who takes care of them and train them to seek revenge against the vampires who killed their family.

Meeting with Victor the boys learn that the kids are in school.  Josephine is an athlete and holds good grades, Aiden is fast and Kristen AKA Krissy is a natural-born leader and a good hunter.  Victor insists that he is giving them a way to get even for the death of their families as well as making a more improved generation of hunters.   Dean still doesn’t like that kids are hunting and leaves Sammy with the “family” and goes out sniffing around.

After talking to the victim Dean learns that the vamp they had killed the night before was a local hero and after all she told him about Jimmy Day he deducted that Jimmy was a freshly turned vampire, about a month old, but that is a problem since Josephine’s family was killed about three months prior. While Dean is out the kids come home from school early because Victor pulls them out and tells them he has found the vampire that killed Krissy’s dad.  He shows them a surveillance picture of the woman and she is wearing her dad’s necklace, but Sam isn’t quite convinced because there is no time stamp on the photo.

Following clues lead Dean to a closed lodge where he finds the vampire from Victor’s photo and learns she was just turned days ago and couldn’t be the one that killed Krissy’s dad like Victor is saying.  Meanwhile Sam spots the blue van outside the house and he and Victor set out to find the driver, but Sam is betrayed by Victor because he is working with the vampire who owns the van.

The teens, with clues from Victor, arrive at the lodge ready to kill the female vampire, but Dean ends up convincing them that she is a new vampire who can still be saved as well as they had to go and talk to Victor about everything.  When they arrive back to the house the walk in on Victor prepping a “crime scene”.  His intention had been to let the vampire kill Sam which he hoped would fuel the kids drive to hunt even more. 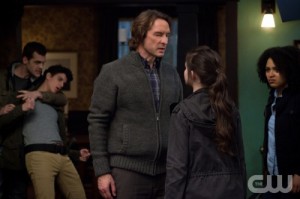 Victor’s plans are foiled when the teens didn’t see things the way he did once they learned the true.  He tries to use his vampire lackey to take them by force, but the kids are talented hunters and they rescue Aiden from the vampire’s grasp and turn their backs on Victor.  Victor can’t handle it and offs himself.

The kids save the newly made vampire and decide to stay a family.  Krissy promises Dean that they won’t go looking for a hunt, but if any monsters cross their paths then they need to watch out.  When the Winchesters leave Dean expresses the need to close the gates of hell so they can have a normal life and before getting in the car Sam mumbles about the fact that he hopes they aren’t the only ones.

Well this week’s episode was pretty good, but not as exciting or enthralling as many of the others have been.  I know anything with  the Winchester boys in it make me happy, but I didn’t love this one nor did I hate it.

Until next week my Wayward family I leave you with this: