Welcome back kiddies.  I am so glad that Supernatural’s break is over, and what a way to start off after a break.  Dean is creeping around either hunting or trying to get away from something when he is attacked and killed by none other than our beloved winged friend Castiel.  After Dean is laying on the floor dead lights start to flicker on and Naomi walks in the door with praises to Cas for no hesitation and how he is finally ready.  Then the cameras pan to the floor we see that it is scattered with dead Dean bodies.  It was like Resident Evil all over again with all the Alice’s. 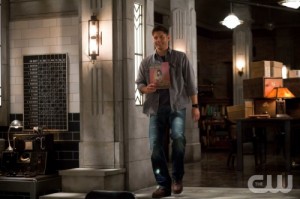 Back at the bunker Dean is going through some of the Men of Letters stuff trying to figure out what it is and what to do with it.  As Sam searches the net for a case he coughs up some more blood and right before Sam tells him about a case he found, where people are dying with melted eyes, burns on their hands and face with puncture wounds, Dean shows off his magazine of beautiful Asian women he found.

Investigating the deaths the boys discover that the people who were killed were looking for something by digging around town and that they were possessed by Demons at the time of their demise.  They go  to visit a woman in town who was the last to see the last victim.  There they learn that the town had been damaged by a flood and rebuilt.  When they are attacked by demons and their host possessed the Calvary, in the form of Cas, arrives and saves the day.

With Naomi pulling his strings like a marionette, Cas is not the same as he was when he disappeared.  He is ruthless and disconnected.  He gives the boys a story about Crowley sending his lackeys to find Lucifer’s crypt for some kind of parchment.  When he tortures the possessed host the boys are shocked, but it is affected when she spills her guts that they have a hostage who knew the land before it was rebuilt.  When she is about to say something about the true nature of what Crowley is after Naomi orders her death and Cas does not hesitate in stabbing her with his angel blade and flutters off to the motel where the demons are keeping the hostage.

When the boys catch up they walk into the room just as Cas kills the demons.  They open the door to the bathroom to find that the hostage is none other the Meg.  When she is telling them what Crowley is really after Cas’ mind is back with Naomi and you can see he doesn’t want to have to kill Meg.  They decided that they can use her to find this object so when Meg tells them that Crowley is after the tablet of angels Cas pretends that is news to him as well.

While Sam and Dean have a talk about how off Cas is during research of the old town Cas tends to Meg’s wounds.  We have always known that the two of them are sweet on each other and the scene between the two of them confirm it.  They talked about a memory of a Pizza Man and how Meg missed the simplicity of the apocalypse when she was bad and Cas was good.  She also made an observation of how hot it was that Cas is kind of badish now.  Before the boys return with a location she tells Cas that if she lives though this that she and he were going to order pizza and move furniture around.

The four of them arrive at the place where they are to find the crypt.  Dean orders Sam to stay behind telling him he found the bloody rag and Sam insists that he is okay.  Cas interjects and tells him that he is injured beyond anything he can heal.  Finally Sam gives in and stays behind to protect the weakened Meg.

During their time together Meg and Sam make their area demon proof and they talk about the past year Sam had with Amelia in which Meg refers to her as a unicorn because it takes a magical creature to pull Sam Winchester out of hunting.

Dean and Cas find the tablet in a chest that is warded against angels.  Cas convinces Naomi to let Dean open the box but once he does she commands Cas to kill Dean and take the tablet.  Cas argues with Naomi that Dean is a good man and he doesn’t need to kill him but she keeps insisting.  During his argument with Naomi his vessel beats Dean to a pulp, but finally he pushes Dean away and grabs the tablet.  The tablet seems to somehow help him break his connection with Naomi.  He heals Dean, tells him that he needs to protect the tablet from Naomi as well as Dean an flutters away. 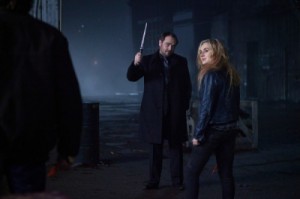 Crowley shows up and Meg tells Sam to go save his brother and her unicorn and readies herself to square off with Crowley.  Sam and Dean get away and right before they tear off we see Meg’s demise.

Ending the show Dean tells Sam what he learned from Cas and that he can’t take anymore lies from anyone and express how much Sam needs to be honest with him after each trial.  He turns on the radio to the song Goodbye Stranger and we see Cas on a bus driving into a place that looks very wooded and rural.

I have to say I loved tonight’s episode.   First I was just glad that the boys were back in town and to see the return of Cas.  I loved to hate out resident demon Meg and I was said to see her be killed, but loved it when she referred to Cas as her unicorn.  It think that is the sweetest thing to come from this show that is all about evil, killing and brothers.  I am interested to learn what Cas’ plan is and to see what the next trial will be.  Gosh this show is just the highlight of my week.

well until next week my wayward family I leave you with this: