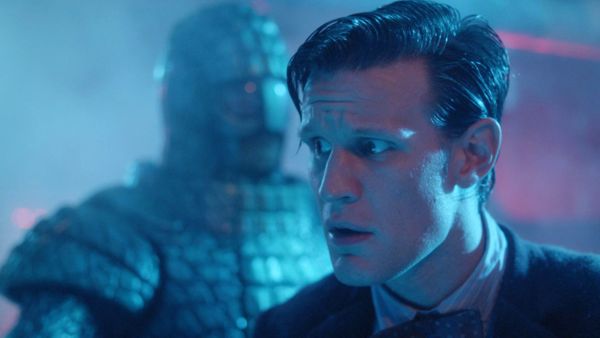 This week’s installment was easily one of my favorite episodes this season, including the first half.  Much like last week’s “The Rings of Akhaten,” the story harkened back to the classic tales.  Mark Gatiss’ script was a truly tense tale with a real sense of danger.  Something that was missing in the previous two episodes, most notable “The Bells of Saint John.”

This reviewcap isn’t as long as most of my others, but I’ve added a TARDISload of quotes this time around.  If you find I’ve left one of your favorite exchanges out of the list, just leave a comment and I’ll get right on adding it to the bunch.  But I warn you, I’ve got so many quotes down there I feel almost like I rewrote the script.

In short, I was in “Quote All the Things!” mode.  I have a problem and you’re the one who suffers for it.

The story begins aboard a Russian submarine about to conduct a nuclear missile launch drill.  At that particular moment we don’t know it’s a drill until the serious proceedings are interrupted by Professor Grisenko (Veteran actor David Warner), the sub’s gentle, quirky scientist.  He ambles onto the bridge singing along to a song by his favorite band, Ultravox. 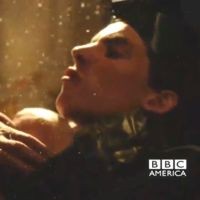 Captain Zhukov asks him about his “specimen.”  An object frozen in the ice for 5000 years and in the hold awaiting a thaw in Moscow.  Naturally, an impatient crew member decides he can’t wait so he gets a blowtorch out.  A few moments of warming the ice and a hand bursts through the ice, grabbing Mister Impatient by the throat.

Remember kids, never thaw any unknown object from an ancient block of ice without your parents’ permission.

And cue seizure-inducing intro of flashing lights and fluorescent/neon red spectrum graphics.  I’m really not liking the new intro graphics, in case you couldn’t tell.  It’s like I’m having a reddish-orange stroke to the tune of the Doctor Who theme each week. 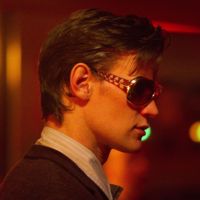 As the Ice Warrior is attacking everyone in his way, damaging the sub as he goes, the TARDIS materializes with the Doctor and Clara expecting to arrive in Las Vegas.  With water leaking in from seemingly everywhere, the duo are restrained and searched.  The damaged and sinking sub settles on an underwater ridge and suddenly the TARDIS dematerializes of its own accord.

We later learn that’s part of its HADS (Hostile Action Displacement System).  The Doctor’s been messing about with the settings and now it seems the old blue box is afraid of water.  One would assume a device of such power as the TARDIS that can withstand so many forces found in outer space and throughout time wouldn’t be fazed by the submarine situation.  Maybe the Doctor’s made it a bit too skittish?

The Ice Warrior makes his way to the bridge and the Doctor manages to calm everyone enough to stop the rampage.  Just as things calm down and the Doctor begins speaking with the Ice Warrior, one of the sub’s crew members zaps it from behind with a seriously-powered cattle prod the crew keep handy for polar bears.  I’m not sure I’d want to rely on a 3-foot cattle prod for polar bear defense. 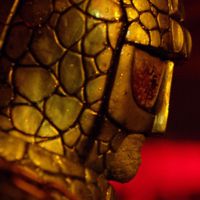 They chain up the Ice Warrior, Grand Marshal Skaldak, in the torpedo room.  He sends out a distress call once he awakes.  Because everyone “smells like a soldier” except Clara, she goes in alone to question him.  Clara notices Skaldak isn’t moving and when she gets near him the suit opens up revealing it is empty inside.  Skaldak has left the suit and without it he’s fast.  Really, really fast.

The newly nimble Martian is creeping around in the walls and overhead.  The crew, searching for Skaldak, come across a crew member’s body which has been dissected by the frigid lizard to learn the strengths and weaknesses of humans.

Once he finally gets enough information to launch a missile, Skaldak begins to do just that.  The first step is calling his armor to meet him then jumping back into it.  He uses the technology in the armor to arm the warheads with which he will basically start World War III.

Skaldak and the Doctor have a showdown of sorts.  A war of words.  The Doctor tells him he’ll be remembered by history not as a warrior, but as a murderer.  Then Clara jumps in, asking Skaldak why he showed mercy on Professor Grisenko earlier, but won’t show mercy on the entire planet now. 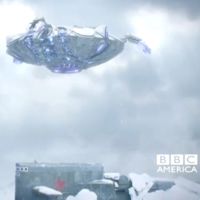 As Clara’s getting through to Skaldak, the sub is gripped by an energy beam that lifts it to the surface.  It’s the Ice Warriors and they transport him to their ship, but the warheads are still armed.  The Doctor is prepared to destroy the sub if Skaldak doesn’t disarm the missiles, but after a bit of sweating, and Clara briefly resorting to Professor Grisenko’s suggestion to sing “Hungry Like the Wolf” when she’s scared, the system shuts down and the world has been saved…again.

Once the threat has been averted, the Doctor’s sonic screwdriver buzzes him with the location of the TARDIS.  It’s at the South Pole.  To quote Clara, “Oh, Doctor!”

-The multiple meanings the title “Cold War” had were pretty obvious.  First, the time period it took place was during the US/Soviet cold war, then the story was a battle that took place at the North Pole, and then there were the Ice Warriors (ice=cold / warrior=war).

-If the TARDIS was literally on the other side of the Earth, how did the translation matrix continue to work aboard the sub?

-The Doctor keeps a Barbie doll in his pocket and is fond enough of it that he kisses it when it’s returned to him?

And now for a teeny bit of trivia surrounding the major guest stars.  I love trivia and these factoids were things I came across while doing research on this episode for the article.  I promise quotes will immediately follow.

Quotes (aka – 85% of the script transcribed by an OCD madman):