Six months ago, a wealthy man named Don Nidaria had an argument with his wife over her clothing. At one point, he morphed into a Lowen, a lion-like Wesen, and his wife morphed into a Mauzhertz, a mouse-like creature, and in his anger, he threw her off their balcony, killing her. Their housekeeper witnessed it. Now, Nidaria is on trial and his lawyer, Barry Kellogg, has some extra powers of persuasion. But Rosalee is on the jury, and when Monroe finds her feeling ill after the first day of the trial, he offers to bring her to court the next day. 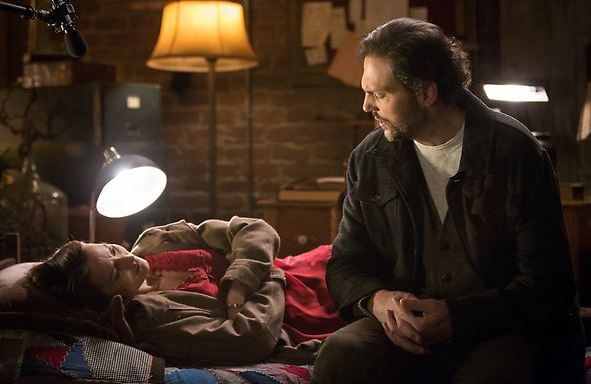 Nick agrees that Juliette should see Aunt Marie’s trailer and asks that Monroe take her. He figures it’ll look better if two people are telling her the same things – they can’t both be crazy, right? Juliette is thrilled and eagerly joins Monroe. At first she’s just fanscinated by the things in the trailer, but then the memories start flooding back – she sees and hears multiple Nicks explaining about the Wesen world, but she can’t understand anything and is so upset that she asks Monroe to take her home. 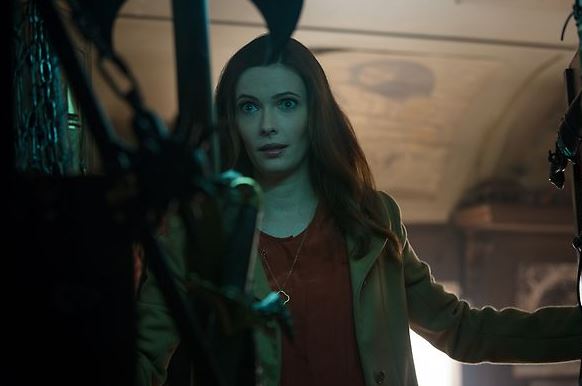 Monroe tells Nick about Juliette’s experience at the trailer, and Nick wants to talk to her right away. Monroe warns against this, saying that Juliette is likely overwhelmed by too many Nicks right now and he should wait. Nick tells Monroe that he’s gotten an email from his mother saying that she’s okay and that the coins have been handled.

The next day Monroe accompanies Rosalee to court and watches the trial. The housekeeper states clearly to the prosecutor that she saw Nidaria throw his wife off the balcony, but once Kellogg speaks to her, her story changes and she says that the wife jumped of her own violition. The courtroom is confused and shocked. At the break for lunch, Monroe decides to follow Kellogg, who heads to the bathroom. As Monroe lurks, he sees that Kellogg drops a toad on the bathroom floor, then picks it up. Inside the stall, Kellogg morphs into a Ziegevolk and eats the toad. Suspecting this although he didn’t see it happen, Monroe calls Nick. Nick and Hank arrive and Monroe explains that he thinks Kellogg is using his powers to tamper with witnesses and the jury so he can win his cases. Nick explains to Hank that a Ziegevolk is a Wesen that eats toads in order to obtain psycho-hallucinogenic influence over people through pheromones, and that there had been a Ziegevolk in a previous case they’d worked. They go inside to find Sgt. Wu on the witness stand – he was first on the scene. Hank doesn’t believe Wu’s story will change, but it does, just like the housekeeper’s story had. 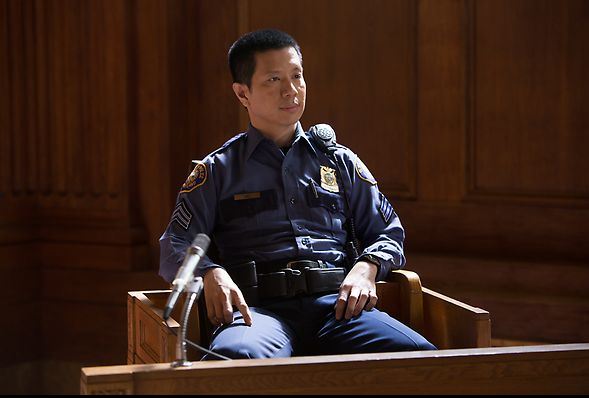 Hank, Nick and Monroe are waiting for Rosalee at the spice shop after court. They explain what they suspect and suddenly everything makes sense to her. They quickly do research to see if there are any options that could help them stop Kellogg, and finally Rosalee discovers a special gland inside the Ziegelvolk brain that produces the phermones. There’s a way to shut down that gland – but to make the potion, they’ll need Kellogg’s sweat.

At the police station, Captain Renard tells Hank and Nick more about the man he’d shot in the street after he attempted to blow up the bar he and his informant were in. The dead man’s real name is Aguistin Katt, from Malta, and he worked for the Verrat. If the Verrat are going to these lengths, he wants Nick and Hank to be aware. Hank asks Nick if he believes Renard, and Nick says yes. When Hank asks if he trusts him, he says he doesn’t know.

The plan to get Kellogg’s sweat is put into motion. Monroe morphs and chases Kellogg outside of a bar, and he runs down the street, eventually finding Bud. They both morph and Kellogg tells Bud that a Blutbad is chasing him. They both get in Bud’s truck just as Monroe catches up and Bud drives off, offering Kellogg a handkerchief to clean up his sweat. He then drops Kellogg at his hotel and takes the handkerchief directly to the spice shop. Rosalee makes the potion and then the really hard part happens the next morning – Hank and Nick interrogate Kellogg about the attack the night before while Monroe shoots one of the toads in Kellogg’s briefcase with the potion. Now all they can do is hope Kellogg eats the right toad. 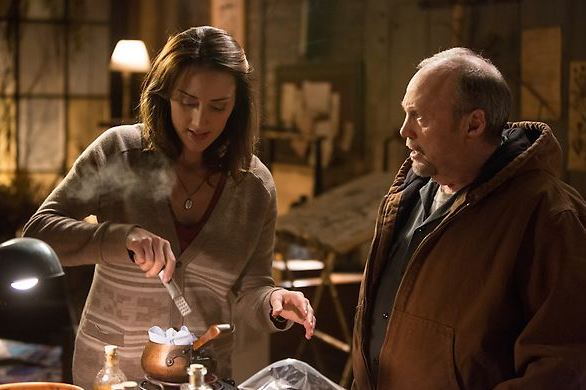 Back in Vienna, Adalind finally meets with Eric to admit that she wasn’t able to get the key from his brother. Eric decides that the Grimm needs to learn the truth about Sean, and Adalind asks if she should tell him. Eric says no – he’ll be going to Portland himself as he hasn’t seen his brother in a long time. He then notices that Adalind seems to be glowing, but she plays it off, knowing just how valuable her pregnancy is and that it’s best kept a secret for the time being. 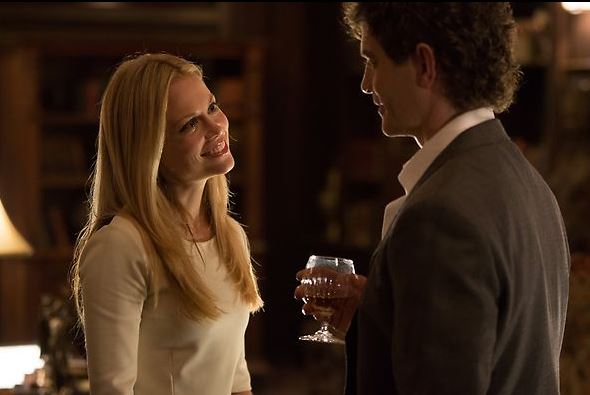 Kellogg delivers his closing arguments and then the jury quickly returns, which usually means a not guilty verdict. Monroe is sure he picked the wrong toad until Rosalee, as the forewoman, announces that Nidaria has been found guilty. Both Nidaria and Kellogg are stunned. That evening, Rosalee, Monroe, Nick, Hank and Bud are celebrating in the back of the spice shop when a customer comes in. Monroe goes out to greet the person and finds Kellogg there, looking for a cure to what happened to him. When Rosalee steps out, Kellogg recognizes her and is sure she’s responsible for what happened. He attacks her and Monroe attacks him to defend her, stopping only when Nick pulls him off. Seeing all of them together, Kellogg knows they did something – but there’s no way to prove it. Nick arrests Kellogg for assaulting Rosalee… and he’s put in a cell right next to Nidaria. 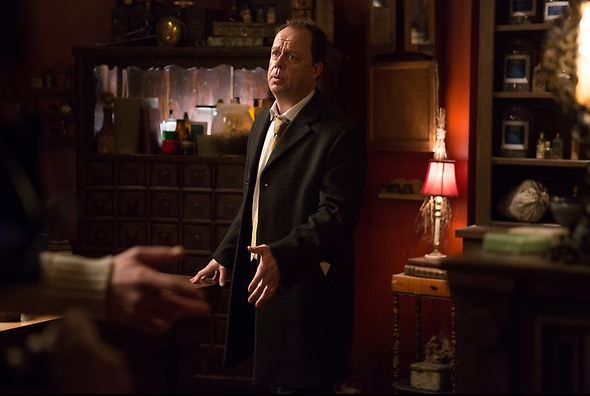 Juliette remembers meeting Pilar, who’d offered to help her, and calls and asks her to come over. Pilar does, and immediately notices that there’s something different about Juliette. She tells her that she’s on the border of the light and the dark and that her journey isn’t over yet. That night, Juliette wakes to dozens of images of Nick in the bedroom talking to her, memories flooding back and overwhelming her. One of the images even tells her that he loves her. 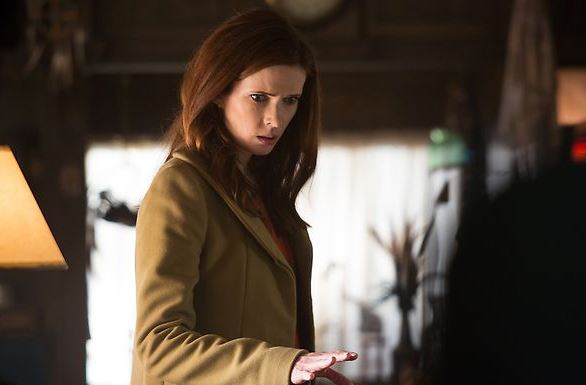 This episode was a good one, but not quite as exciting as last week’s. It was interesting to see more of Wesen we’d seen in the past – I always enjoy learning more about Wesen! And anytime Bud shows up is a bonus – he’s such an adorable character!

It seems like all of Juliette’s memories are coming back, but she can’t make sense of them yet. It’s going to be interesting when the floodgates close and things start to click – will she freak out again over the Wesen world? It was good to see that she finally decided to contact Pilar, but her comment about light and dark worlds… is she trying to suggest the Wesen world is dark and the human one is light? I think we’d all disagree as there are clearly many Wesen who are not dark. But without knowing what Pilar really means, it’s difficult to say. Still, like Nick, there seems to be hope – it’s better for Juliette to have the memories than not have them, no matter how difficult this process is.

So Eric is going to come to Portland – that promises to be a disaster of epic proportions. Still, it’s going to be really interesting, since after all, Eric and Adalind think Nick doesn’t know about Renard, and he does. Their threat is useless now, so the confrontation should be even more intriguing.

The preview for next week shows that Adalind is going to try to get her Hexenbiest powers back. If this was possible, why didn’t she try to do it sooner? My bet is that it somehow involves the pregnancy… we’ll find out next week!