Revolution ‘Ghosts’ Review and Recap: No Refuge from Memory 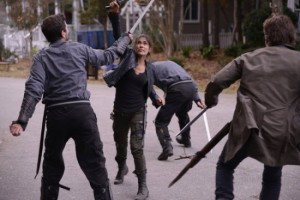 Hey, Revolution watchers out there! I’m back for another review/recap of Monday’s episode ‘Ghosts.’ A lot of the footage from this episode was featured in the Revolution WonderCon trailer that I recently wrote about. This episode dealt heavily with the past–both recent and long-buried–as our heroes try to move past Danny’s death (which I still maintain was pointless and made the first half of the season seem almost like a waste). We also get a new character this episode who may be around for a while, assuming he isn’t just another expendable red shirt that they’ll kill in another episode or two…

The episode opens with the Matheson family, Nora, and Aaron burying Danny’s body. Rachel tries to take Charlie’s hand and comfort her but Charlie pulls away. The hurt registering on Rachel’s face is almost tangible. Regrouping with the rebels, the plan is for their leader to escort the wounded to one base while the able-bodied fighters pull back to a place called Echo Base (shades of the ice-planet Hoth in The Empire Strikes Back). Miles, meanwhile, declares himself a rebel (reluctantly) and announces his intent to recruit some of the men who helped him in his planned coup against Monroe. His first man up is Jim Hudson, who may or may not hate him.

While Miles and Nora head off in search of Jim Hudson, Charlie, Rachel, and Aaron join the group heading for Echo Base, which is really just an overgrown hospital. Charlie immediately joins a raiding party set to attack a militia camp. Rachel begs her daughter not to go but Charlie pointedly ignores her mother, still sore over her brother’s death and blaming Rachel for it. Meanwhile, Aaron unpacks the two pendants–the one Ben gave him and the one Rachel brought with her–and sets them aside. They power on like they did in the lighthouse and at Grace Beaumont’s house. Thinking little of it, he ignores them. Miles away in the Monroe Republic, though, sinister DOD agent Randall reveals that he remotely activated the pendants and now has their location marked. It is also notable that he insults Monroe to his face because he can–Monroe needs him, after all, so he can say whatever he wants without risk. I kind of, almost want to respect him for that…

Just outside Culpeper, Virginia, Miles and Nora get a lead on Jim Hudson’s location. As they set off in that direction, Nora asks Miles if there’s anything he wants to talk about to which he angrily snaps “I already joined your stupid rebels. What more do you want from me?” This obviously takes Nora aback. The rift between the couple seems to be turning into a yawning chasm. Are the writers paving the way for Nora’s exit and a Miles/Rachel romance? I hope not. Aside from the fact that Rachel is Miles’ SISTER-IN-LAW, I really like Nora as a character. Anyway, at the same time that their argument is happening, the two are being watched by a former rebel who then goes and sells the information on their whereabouts to a militia captain. The traitorous rebel is promptly executed after divulging the info.

Back at Echo Base, Rachel spots Charlie coming back from the obviously successful raid. She is shocked to find that Charlie has someone else’s blood on her face. The younger Matheson storms off to nurse a wound she kept hidden from her mother. Nonetheless, Rachel spots it and offers to help her daughter. Charlie, angry, resists fiercely and outright accuses her mother of causing Danny’s death. The scene helps draw out Charlie’s pent up frustration at her long-absent mother. She seems to be struggling for independence while coping with the death of her brother and also trying to accommodate her mother’s sudden re-emergence in her life. Charlie’s defiance reaches a crescendo when Rachel slaps her in a fit of emotion and anger. She immediately tries to apologize but the damage is already done. 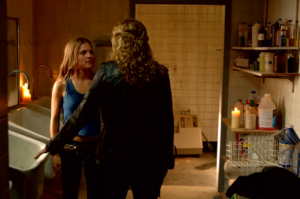 In the town of Culpeper, Nora and Miles find Jim Hudson is now a married librarian living under an alias. His wife does not know about his past or even his real name. Miles attempts to beg his one-time loyal friend for help but Jim is angry at Miles for not killing Monroe when he had the chance and allowing his back-up to take the fall for him. Jim just wants to stay in Culpeper and try to lead a quiet life with the family he’s built there.

At the Echo Base, Rachel notices that the pendants have activated and becomes greatly alarmed, realizing that someone is tracing the devices. A swarm of Humvees is spotted near the base, confirming her fears that Monroe has indeed regained power. The rebels cannot deal with such firepower and immediately evacuate. Midway through, Charlie realizes her mother is not present and goes back with Aaron to look for her. Rachel is desperately trying to destroy the pendants. To Aaron’s surprise, she disassembles them, revealing they are only flash drives–that’s right: the very device I save my essays and term papers to could be the key to restoring power. A let-down? Or just a clever disguise? Either way, Rachel dumps the drives in a vat of acid to destroy whatever secrets they contain and keep them out of Randall’s hands. She’s deduced by now that he’s the one responsible.

Flashback time! We haven’t been treated to a meaningful flashback in a while. Good to know JJ Abrams is still on his reverse-storytelling game. In this flashback set a year before the blackout, Randall is at home with his wife when they get a visitor, informing them that their son was killed in the line of duty in Kabul, Afghanistan. They are devastated. So what’s Randall’s game here? Is he trying to end all wars in a twisted way? Or is he seeking revenge for what happened to his only son?

Nora and Miles are prepared to cut their losses and leave Jim to his peace when they spot a militia death squad and realize that they, Jim, or all of them could be in grave danger. They race back to warn him but he resists fighting until his wife accidentally overhears and demands to know what’s going on. Meanwhile, in the hospital, Charlie, Aaron, and Rachel are trying to escape but Randall has all the exits sealed. They take cover in a radiology ward and narrowly escape being spotted. Charlie demands an answer as to who this Randall Flynn person is. Rachel explains that he was assistant director of the DOD and that she and Ben reported directly to him. She was assisting in building a technological super weapon, though that was far from her original intent (or so she claims).

We are treated to a second flashback. This time, Ben, Rachel, and Randall Flynn are all walking through DOD headquarters. Randall wants the weapon ready for roll out in four weeks. Their target is a terrorist cell in Afghanistan. Rachel and Ben urgently request more time to test possible consequences of the technology, unsure of whether or not its spread can be contained once it is unleashed. Randall insists they press forward anyway to spare more American soldiers’ lives.

Back in the present, the three are found by two guards who Charlie quickly kills. She steals one’s gun and hands her crossbow off to Aaron. In the confusion of the escape, though, Rachel has gotten separated and is quickly apprehended by Randall. She implores him not to help Monroe, using her best begging-Rachel voice, which she has been using quite frequently to manipulate those around her into believing she is just an innocent, helpless woman trying to undo a grievous wrong. Randall explains that his plan is to keep the power only for a limited elite. With power out of the hands of the masses, wars will not start and lives will be spared. Or so he claims. As they emerge from the hospital, Charlie and Aaron ambush Randall’s squad, killing most of them. Rachel seizes the opportunity to escape and the three run off to the rendezvous point with the other rebels.

Meanwhile, in Culpeper, Miles, Nora, and Jim must fight their way out. They lure the death squad into a town square and proceed to engage them in a bloody fight that only proves just how bad these militia men are at their jobs. The death squad captain spots Jim’s wife and proceeds to try to kill her. Jim bursts in at the last moment, hacking the guy up and saving his distraught wife. Horrified at what she’s witnessed, Jim’s wife expresses doubt in him because he has lied to her about who he is. She subsequently leaves him. Heartbroken, Jim accuses Miles of ruining his life yet again but, seeing no other alternative, agrees to join the rebels in their cause. 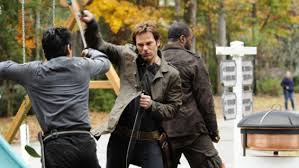 At the rendezvous point, Nora, Miles, and Jim meet up with the others. Charlie shyly approaches her mother and apologizes for her past behavior. Being so close to death has, apparently, given her a new appreciation for her mom and she’s looking to make good. They both express their grief over Danny’s death and proceed to comfort one another as Miles watches at a distance. Nora takes his hand but is seemingly aware that he is closing himself off from her. Yet another scene foreshadowing future Miles/Rachel passion.

In one last scene, Aaron approaches Rachel and expresses his desire to help her, feeling he has earned a right to know what’s really going on. Rachel agrees to tell him everything she knows and starts telling him about something called “The Tower.” I smell an adventure coming on, but we’ll have to wait until next week to find out what the Tower really is. All-in-all, I thought tonight’s episode found a good mix between action, revealing mythology and back-story, and human elements. I was really excited to find out more about the pendants and what caused the blackout, as I’m sure all of you were too. It looks like the writers will be giving us some more answers in the coming weeks!

What do YOU think the Tower is? And is a virus really responsible for this global blackout? What’s your opinion on Randall? Is he a power-hungry bureaucrat or a misguided, grieving father looking to prevent pain? Can Jim Hudson be trusted to help the group out or is he still looking to get revenge on Miles for past transgressions? Weigh in with a comment–I want to hear your thoughts, too! And don’t forget to catch Revolution on Mondays on NBC at 10/9C, then check back here for my review/recap. ‘Til next week!