Revolution ‘The Night the Lights Went Out in Georgia’ Review and Recap: The Georgia Patrol 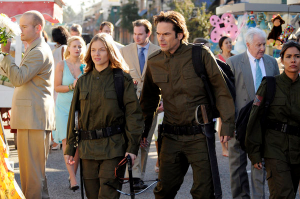 Hey everyone, and welcome back to another review/recap of NBC’s Revolution. This episode, titled ‘The Night the Lights Went Out in Georgia’ was an experiment in how ridiculously long they could possibly make an episode title. It also gave away a few of the secrets we’ve long been wondering about, while introducing plenty more that continue to frustrate me (and probably some of you, too). So without further ado, I’ll get into the recap.

The episode begins with Monroe finding about about the Nevilles’ escape from Philadelphia. Needless to say, he’s not pleased. He even guns down Neville’s former aide just to prove his displeasure. Admittedly a pointless scene. Moving on, a bloody dude on a horse gives a message to Miles and promptly dies. The message indicates that Monroe sent a three-man strike team to sneak the nuclear bomb he stole last episode into the Georgia Federation capital of Atlanta. He plans to force the people of Georgia to surrender or be obliterated. Miles, Nora, and Charlie decide that they should stop this from happening. Meanwhile, miles and miles away, Rachel and Aaron (who went on a side-quest last episode) are in search of Dr. Jane Warren, an old colleague of hers who knows about the mysterious Tower that they are seeking answers at.

Entering the Georgia Federation (whose flag looks strikingly similar to the Confederate flag), Charlie marvels at leaving the Monroe Republic, something she’s never done before. Yay! Vacation! The Federation, we soon learn, is filthy rich thanks to ideal weather to grow crops and some industrious trade on the part of their president. They have steam-powered vehicles and their landscape is picturesque, in stark contrast to the Monroe Republic’s bombed-out sites. Deciding they need military uniforms to blend in, they plan to steal some from an outpost only to find that they’ve already been beaten to the punch. Everyone in the outpost is dead and the murderers absconded with the spare clothes. Miles recognizes a familiar knife at the scene of the crime. I smell a flashback!

And lo and behold! A flashback! Didn’t see that one coming. (Okay, turning my sarcasm off now). Miles recalls a protegee of his, a kid named Alec who he trained. The knife was a family heirloom of Miles’ and he gave it to Alec as a good luck charm.

Meanwhile, Aaron and Rachel are stalking through some creepy woods when they are jumped by a pair of soldiers who, predictably, attempt to rape Rachel. You’d imagine there are actually women in the Republic and they needn’t resort to acts of violence but, hey, I guess they need something to do… The dastardly would-be rapists don’t get far becaus 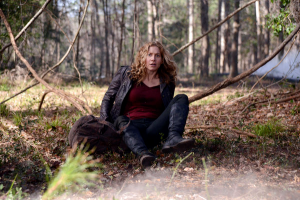 e they suddenly break out in hives, start smoking, and literally melt/disintegrate in one of the more disgusting scenes to come out of Revolution. The lovely Dr. Jane Warren enters with a swagger akin to Sigourney Weaver’s character in James Cameron’s Avatar. She has a device that apparently triggered the graphic deaths. She then cheerfully invites Rachel and Aaron to her house for some sandwiches.

In Atlanta, Miles, Nora, and Charlie arrive to find the city is a bustling commercial center. Miles is looking for Alec, who he knows is dangerous. They fan out in search of him, using flashlights to detect when they get in range of the amplifier powering the nuke. Miles finds it in an alleyway but Alec jumps him before he gets far. They stare each other down uncomfortably and it comes out that Miles betrayed Alec in some way. They engage in a vicious duel but Charlie comes in just in time to save her uncle, shooting Alec in the shoulder with her crossbow and sending him packing. They pursue, turning over vendors’ carts and chasing him through department stores. Seriously. Atlanta has department stores. 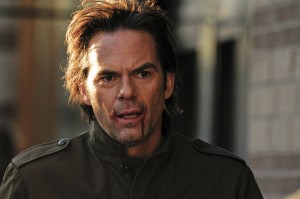 Miles spots Alec and pursues him down another alley, only to stop when Alec murders a Georgia policeman and sets up the scene to look like Miles did it. He flees just as police arrive to take Miles in. Nora and Charlie begin to plan a jailbreak.

Upon arrival at Dr. Warren’s house, Aaron and Rachel meet her partner, another old friend of Rachel’s whose name is Beth. Rachel mentions she’s headed to Colorado, at which point Dr. Warren realizes why she’s come. In a private conference, she demands to know what Rachel’s planning. Rachel admits she wants to go to the Tower to restore power by destroying the nanites, which are those little virus-things that caused it in the first place. We also learn that the weird glowy think Rachel took from Danny’s side was a nanite canister. It was the only thing keeping her son alive.

Jane then reveals that Beth had stage IV cancer and the nanites are also inside her, eating away at her cancerous tumors to keep it from worsening. Destroying the nanites will kill Beth, and Jane can’t stand the thought of losing the love of her life and the only true family she has left. She is hostile to the idea.

Meanwhile, Charlie does some wandering in an alley in Atlanta. There is a lot of alley-walking this episode. Surprise! She gets jumped by Alec, who also seems to enjoy jumping alley-walkers. He reveals that he was given up by Miles, despite all the trust he placed in his mentor. He then tells Charlie to “ask him what he did to your mom sometime.” Yet again we are thrown a bone about Miles and Rachel’s past. What really happened between those two?

A helicopter flies overhead and drops a number of flyers, warning the citizens of Georgia that a nuclear bomb will detonate if their president fails to surrender by midnight to the Monroe Republic. At the same time, Miles is led into the office of Georgia President Kelly Foster. She is hostile toward him but also disturbed by Monroe’s ultimatum. Miles offers to trade his freedom for assisting her in disabling the bomb. She is hesitant and brings up his past as a Monroe Republic general. “What about what you did to me personally?” she asks. Yeesh, is there anyone Miles hasn’t harmed in some way? Foster eventually does let him go and he reunites with Charlie and Nora to locate Alec and his bomb. He spots him entering a building and they give chase. 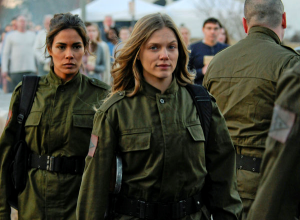 A flashback reveals that Alec had been sent on a assignment by Miles for the Republic and failed his mandate, thus nearly sparking a war with Texas. The Republic is too weak to fight Texas so, to appease them, Miles gives them Alec as a prisoner of war. This, understandably, hurt Alec.

At Jane Warren’s house, Rachel is up to her old tricks and snoops through her library for clues to the Tower. Jane catches her and accuses Rachel of only caring about the damage caused by the nanites after her son is dead, thus she no longer has anything to lose. She then pulls out the little disintegrating-ray device and tries to kill Rachel, but Beth interrupts. She overheard everything and is shocked to learn there was a way to restore power all along. Though aware that it will kill her, she decides to sacrifice herself for the greater good and asks Jane to give Rachel the info she needs, warning she will commit suicide otherwise so that Jane will have no reason to keep it secret. Reluctantly, she complies and gives Rachel what she needs to know.

Back at the building, hunting for Alec, the group splits up. Miles stumbles on the kid guarding the bomb. They get into a verbal altercation first, in which Miles tries to dissuade Alec from detonating the nuclear weapon. The talking leads to fighting as Alec gets the order from Monroe to activate the bomb. They get into a fierce fight but ultimately Miles is forced to kill his own protegee to protect the others. The plan to blow up Atlanta fails, but Miles is perturbed. Seeing this, Charlie naturally decides to bring up the question of what Miles did to her mom (because clearly it’s an appropriate time). Miles gets defensive, insists it didn’t matter, and then adds “the truth is, people count on me and then they get hurt.” He leaves to go meet President Foster, who offers him an opportunity. She plans to wage war on Monroe and is well aware that her ground troops have his outnumbered. She wants the rebels and Miles, meanwhile, to go behind enemy lines and take them apart from the inside out. She offers Miles the title of general and command of a contingent of Georgia soldiers. The episode ends with Miles looking over the troops and considering her offer.

Okay, so for me this was yet another lackluster episode of Revolution. Did we finally get some answers? Yes. But at the same time it seems like we’re being led on and on, wondering about the same mysteries that seem to matter little in the long run. So the nanites can keep people alive. Cool, but what did that do for the storyline, exactly? And as for this whole Miles/Rachel thing? They keep hinting at something big but past experience with shows like this says that it won’t really be anything surprising. Probably an extramarital affair. That or they dated and Miles mistreated her. Alec was yet another pointless character introduced to make Miles feel bad and deliver some JJ Abrams’ signature flashbacks. In the end, he proved fairly inconsequential while the plot itself was anti-climactic. We all knew that the bomb wouldn’t go off in the end.

So what did you think about this week’s episode? Are you as disappointed as I was? I feel like the show is slumping back into its old rut again. The last two episodes were fairly great, as were a few out of the first half of the season, but the rest just seem to muddle along in mediocrity with no real answers being provided. I hope that next week’s episode improves. And you can be sure I’ll let you know! Check back here after watching Revolution on Mondays at 10/9C on NBC. Now weigh in with a comment and let’s hear you sound off on this week’s story. That’s all for now. See you next week!