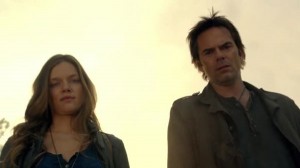 Hey, everyone. So I know what you’re all thinking and no: I’m not a psychic who predicted the next new episode. This is just a WAY overdue review/recap for an episode of Revolution that aired two weeks ago. I had some technical difficulties and such…I won’t bore you with details but I am sorry it took me this long. As you may have known, last week’s new episode was delayed due to the tragedy in Boston. Our thoughts continue to be with the people of that fine city as they recover from the trauma and (of course) with the victims and their families. And we are grateful to the police for capturing the suspect. Anyway, with all of that said and done I bet you’re waiting for a review. Let’s get to it, then.

So if you recall, last episode ended with Rachel telling us about “The Tower,” which sounds like some ominous boss-level out of a video game. You may also remember that Randall, an executive with the DOD (and Rachel’s ex-boss) is also working for Monroe. So this episode, The Song Remains the Same, picks up with Monroe, Randall, and Tom Neville having a meeting. It’s clear that Randall and Tom are continuing their prissy cat-fighting from last week as Randall berates Neville’s inability to successfully complete a single objective. Monroe gives Major Neville an assignment to recover something valuable and top secret. Kim Raver is back as Julia Neville, Tom’s wife, who is anxious and dislikes the fact that the Neville family has to sacrifice so much for Monroe’s Republic. If you remember, they’re pretending Jason, the prodigal son if you will, is dead 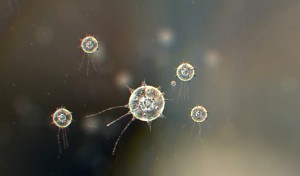 to avoid suspicion that they may be traitors like their child.

Meanwhile, Rachel and Aaron are at the rebel hideout. Rachel is continuing her narration of what caused the blackout. Apparently, they’re these little virus-like things that are programmable. They have two settings: absorb electricity and produce it. The technology was released into the air at The Tower, but clearly something went very wrong. Rachel is unsure what and refuses to go to the Tower to take a look, assuring Aaron that they would be killed if they even tried. Just so you know, these things are everywhere–just like germs. I’m a little worried about inhaling now…

A military convoy trundles past a rebel lookout post and Nora gives Miles the heads up. Neville is inside a Humvee in the convoy, rocking out to some Lionel Richie on his iPod as if it’s completely normal for him to do so when everyone else can only dream of music. His driver is less than amused. Apparently, so are the rebels because they promptly blow up the convoy with an IED. Nev 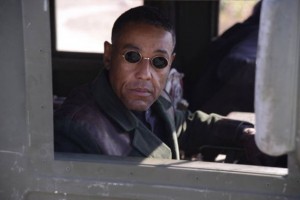 ille is (unfortunately) injured but alive and sees Miles and Charlie looming over him. They knock him out and bring him as a prisoner back to rebel HQ. Rachel is infuriated and wants him to be executed, but Miles insists they must interrogate him for information first.

With Neville properly restrained, Miles begins the menacing glares and hushed threats, signalling the start of questioning. I guess he’s the bad cop. Apparently, there were 30 pounds worth of diamonds in Neville’s Humvee so I guess diamonds are still a valuable currency? Neville tries to play up reverse psychology and guilt-trip Miles for Danny’s death. Miles appropriately beats Neville to a pulp and promises not to kill the good Major, only torment him repeatedly until he spills his guts. I guess Tom has incentive to speak now.

Rachel, meanwhile, is destroying a pendant that was recovered from Neville’s convoy–apparently it’s what gave him the power to drive the truck in the first place. A group of militia arrives and Charlie recognizes Jason among them. He knows his dad is here and wants to talk to him but is forbidden by Charlie and Miles. 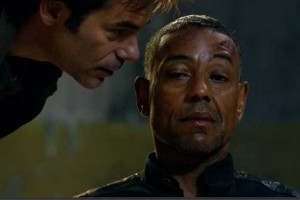 Rachel, meanwhile, has once again proven why she is my favorite character as she deviously plans to murder Neville herself. She pretends to be innocent, sweet, naive housewife Rachel with some rations for the poor prisoner, then promptly bludgeons his guard into unconsciousness and prepares to burst in and hack the man who ruined her family to pieces. Charlie sees her, though, and intervenes.  They way Rachel so calmly informs her daughter that she plans to kill Neville sent shivers up my spine. This is one cold-blooded mom. Anyway, Charlie talks her mom down, informing her that while they all want to avenge Danny, they need whatever secrets Neville knows and tells her mom they can’t be emotional about this. Rachel prophetically says Neville will escape but does back down, throwing out the line “You sound like Miles.” You have to wonder: who’s really the mom here?

Now distraught at her daughter being more level-headed than she is, Rachel runs away sobbing. Miles tries to console her. “What world is this that you’re better for Charlie than I am?” she asks, clearly upset that she hasn’t been a better mother to her daughter.

Jason, meanwhile, goes to visit his father. Neville appears disgusted by his son’s rebel affiliation but Jason has just one question: what more could he have done? He contends that he only ever wanted to make his dad proud. Neville claims to have always been proud, but hard on Jason because he wanted his son to be better than he was. Jason calls BS on his dad. Neville switches tactics, trying to manipulate Jason into freeing him by claiming Julia is in danger and that if he fails his objective, she will be killed. Jason seems persuaded by this threat to his mom and frees the Major, then insisting that he be allowed to accompany his father for his mother’s sake. Neville says they are headed to a cement factory in Finley, Virginia. Jason opens the prison door to reveal Miles, Nicholas the Rebel Priest, Jim (from last episode) and other standing there, having heard exactly where Neville was headed. Jason betrayed his dad to get the info and prove his loyalty to Miles. He is worried for his mother, though, and Miles swears to send a rescuer for her after they head to Finley. Charlie is tagging along too, as is Nora, but Nicholas will remain in charge of HQ.

This is a bad move for Nicholas. Neville requests his presence to confess his sins. Nicholas is rightfully scornful. Neville then reveals he has broken free of his cuffs and proceeds to murder the priest. Ironically, Neville used a nail to pick his lock and get away. And thus ends the saga of Nick the Preacher.

In Finley, the group of rebels spot Randall, who was dispatched by Monroe after it became apparent Neville had once again failed his mission. Randall has a briefcase of something mysterious. Jason impulsively takes a shot and misses, thus alerting the Republic soldiers to their presence. Randall escapes as a firefight ensues. In it, Jason’s rebel commander (who is played by the same actress who portrayed Jacqui in The Walking Dead–I love a good crossover) is killed, upsetting him visibly.

When the fighting is over, Nora, Miles, and the other survivors (Charlie, Jason, and Jim among them) enter the factory to find a bunch of blueprints, a laboratory setting, and lots of bio-hazard signs. They take everything back to Rachel and Aaron. Rachel suspects they are plans to a nuclear weapon.

Meanwhile, Neville makes it back to the Monroe Republic and hastily grabs his vital supplies and his wife to make an escape from the city before Monroe discovers he’s there.

Nora is devastated at Father Nick’s death and says they should have killed Neville when they still had a chance. Charlie goes to see her mother, admitting she was wrong in preserving Neville’s life. Rachel then informs her daughter that she must leave her yet again. Charlie doesn’t want her mom to leave. Miles likes the idea even less. Rachel is heading to the Tower to try and restore power but Miles fears this may start a global war. Rachel insists there is no other way to keep Monroe from dropping nuclear bombs on everything.

She begs Miles to look after Charlie and says, “You need to take better care of her than you ever took of me.” Yet again their past comes up but what, exactly, is their past? Were they lovers before Ben came in the picture? Or did Rachel have an extramarital affair with her own brother-in-law? Anyway, Miles and Rachel kiss passionately. Rachel then preps to leave, with Aaron in tow. She says there is no chance she’ll be coming back alive, then leaves. And with her walking off, we reach episode’s end.

A couple of things I’d like to highlight from this week’s episode, the first being that I think this was much better-written than the last episode. Secondly, we now know that it wasn’t a computer virus that wiped out the power but a literal virus. Hooray for pathogens! And let’s take a minute to recognize that Monroe–a certifiable madman–now has nuclear capabilities. That’s a frightening thought.

And now for a bit of speculation about Miles and Rachel’s past because with all the “Charlie sounds like Miles” talks and the obvious past between them–is Miles really Charlie’s dad? Was she conceived through an extramarital affair that Ben never knew about? Rachel’s a champion liar so it would be easy for her to conceal the fact, especially since Miles and Ben had similar genes. Hmmm…

Oh, and the best throwaway line of the episode came from Jason after Miles referenced his ‘boy-band’ face: “What’s a boy band?” So the apocalypse-children know not of the Backstreet Boys and One Direction. That’s disheartening. Then again his dad only listens to Lionel Richie so…

Well, that’ll do it for me. Of course, I’ll be back real soon to cover the next new episode which airs tomorrow (and every Monday) on NBC at 10/9C. What did you think of the episode? Of my theory? Anything else you’d like to add? Feel free to speak up, we’d love to here you and the comment section beckons! See you real soon!