Dean wakes up from a nap in a startle, but wait he isn’t Dean. He is dressed in a 1950s military uniform covered with a white medical lab coat.  Not sure what is going on or where he is he removes a table from the door, breaks the leg off and heads out into the hallway full of bodies.  As he gingerly walks down the corridor he pauses and a shadow comes down onto him…..

And we are back to the present where Dean is returning to the bunker and Sam is just waking up after more than a 24 hour slumber.   Sam is eager to find Kevin, but Dean is insistent that they stay put so that Sam can get some more rest because the 2nd trial has taken more out of him then the first one.  Sam is not heeding his big brother’s advise and so Dean tests him and when Sam fails to hit the target at gun practice Dean has a bigger leg to stand on. 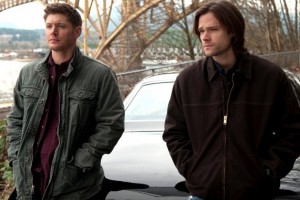 The Winchesters get an email from Charlie, a girl we have seen a couple of times now, saying she was in the area and she found a case for them.  Meeting her in a remote location she tells them she was in town for a comic book convention, Sam thinks that is a bit strange, when she read about a guy who went missing and later found dead with his insides liquefied.  In their brief catching up session she also tells the boys she has read the book series Supernatural by Carver Edlund.  When the boys find out the books are online and are almost impossible to get rid of they are none too happy.

It is decided that Dean, accompanied by Charlie as his partner, will check out the victim and Sam will stay home and rest.  Before they can head over to the morgue as a FBI team they have to go shopping for Charlie and during the course of the “Walking On Sunshine” fashion show Dean fills her in on the trials.

Arriving at the morgue the duo are thwarted by the coroner, Jennifer O’Brien, wanting forms filled out by their “supervisor” to see the body.  When the two hear about another victim that two video gaming teens discovered, they head to the scene.  The new vic was liquefied and seemed to have a blue hand print on him.  Arriving to the location they run into Sam, who had retaken the shooting test and by his new standards came close enough, who was already gathering clues.  He is looking pretty sick, but he is ready to dive into this hunt.   Dean begins to pester Sam and leaves him and Charlie at the scene , but Sam (after Charlie asks if they still need to break into the morgue) knows where he is going and beats Dean to the morgue.  There Charlie distracts the coroner by asking for fashion advice and the boys learn that the bodies have been burned and all clues along with them.

Once they are back at the bunker they learn that the Supernatural is a form of Djinn whose eyes glow blue and leave blue hand marks after their kills.  Charlie, who has seemed off since she joined up with our heroes, abruptly leaves and  is kidnapped by the Djinn who turns out to be the coroner Jennifer O’Brien.  The boys try to get a hold of her and end up following her phone GPS to a place she owns in one of her aliases.  There they learn she is donating money to a patient at the local hospital.  Dean leaves to find out about the patient and leaves Sam to figure out what may have happened to Charlie.

At the hospital Dean learns that the patient is Charlie’s mom who had been in an accident when Charlie was around twelve.  Sam learns that Jennifer is the Djinn and where she is.

Jennifer explains to Charlie that her kind of Djinn feed off fear and not from happiness and she knew that Charlie would be a meal fit for two and then proceeds to feed on her.  The boys find her and quickly take Jennifer out, but the Djinn antidote doesn’t work for her kind and they deduct that they need to get into Charlie’s dream like state and they break out the African Dream Root.  Dean needs to sleep fast after taking the elixir and Sam knocks him out.

Now we are back in 1951 where Dean is a military doctor.  Once he catches up with Charlie he learns that the dream isn’t her happy place but her recurring nightmare involving her mom who is already gone, but she can’t accept that.  Dean convinces her that she needs to stop letting it scare her and let go and stop playing the game.  After an emotional moment Charlie puts down her gun and the monsters along with her mom disappears.  Meanwhile while she and Dean are in dream world Sam struggles, but succeeds, in taking out the Djinn’s teenage son. 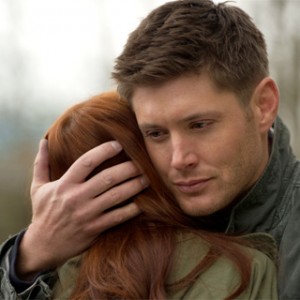 The Three of them saying good-bye was very  touching.  Before heading back inside the bunker Sam hugs the red-head and tells her to come and look through their archives because she is truly a woman of letters.  After Sam is out of ear shot Dean and Charlie share an understanding hug.  When he asks her what is next she tells him she is going by the hospital to let go.  However when she asks him if he is going to let go he tells her “never” and she smiles and replies with “That’s my boy”.  Before she walks away down the road she tells Dean she loves him and he tells her he knows and watches her walk away with the protective big brother gaze.  Heading back inside the bunker Sam tries to tell him that he was right but that he had to be a part of what they do, but Dean just walks over and embraces his brother who in turn hugs him back.  Pulling apart Dean expresses the need to find Kevin.

I loved loved loved tonight’s episode.  I loved the humor that our show is known for.  For instance when Dean tossed Sam a beer and Sam totally misses it and it shatters to the floor and Dean looks at him and says, “That is why we don’t have nice things Sam.”  Classic I loved it.  I loved the interaction between Sam and Dean.  It almost felt like old times and of course I adore Charlie.  I find this character rich and fun and she brings a refreshing element every time she is on the show.  She really fits in as a younger sister of the Winchesters.  I sure hope we see more of her in season 9.

Well until next week my dear Wayward family I leave you with this: