It appears that Kevin is plagued by Crowley.  He hears him in his head and in his dreams.  His dreams are full of torture Crowley dishes out and the pressure of getting the tablets translated is really getting to the young man.  When Dean and Sam show up he is carrying around a big metal frying pan and is in a real foul mood.  They learn that he hasn’t heard from Garth, but he has translated the next trial, which is to rescue a soul from hell and send it to heaven.  (Well that seems like a tall order.)

In order to figure out how one can sneak into hell the boys summon and capture a Crossroads Demon, who Dean is disappointed that it isn’t a hot chick, and questions him.  Finally he gives in and tells them that there are some Reapers that are smuggling people into hell as well as heaven, for a price.  Before the boys put the demon out of its misery they learn everything they need to know about getting into hell. 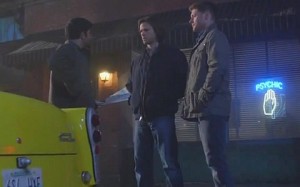 They approach a reaper, who is playing that part of a taxi driver, they propose their need to get into hell and when the Reaper tells them he is the same Reaper that took Bobby Singer to hell Dean is hell-bent on getting his soul and sending it to heaven.  The boys have a small discussion when Dean wants to go with Sam and  Sam has to remind Dean that he has to do the trials alone and he will get Bobby back.  The Reaper tells Dean to return for Sam in 24 hours and then leads Sam into an alleyway and instructs him to take his hand.   As he does Sam mutters how creepy it all is.

The alley starts to twist and move and Sam starts to get nervous, but all of a sudden they appear in a grey forest.  Sam asks RJ if they were in hell and RJ tells him that they are in purgatory.  Sam begins to get upset saying that he paid to get to hell and RJ tells him to calm down and gives him directions to the backdoor (a portal) to hell but tells him to be back in the same spot in exactly 24 hours.  Meanwhile Dean returns to the location where Kevin is hiding out.  Kevin emerges from the closet, convinced that Crowley is in his head, spouting that it is the safest place to be.  Dean gives the boy a  lecture about how he has to suck it up and just keep going, but Kevin isn’t convinced and scurries back to his room with Dean’s pie in tow.

Crowley has been told that RJ was seen with the Winchesters and Crowley confronts him.  Frightened by the King of Hell’s presence he spills his guts.  When Crowley is convinced he has gotten everything from the Reaper he kills him ensuring that he will not be picking up Sam and Bobby.

Sam makes his way through Purgatory and finds Bobby who punches him in the face.  When he convinces the older man who it is really him Bobby tells him that is part of his torture….100s of Sam and Deans daily.  On their way out of hell they only run into one demon and they make it back to the meeting spot, but RJ isn’t there.

Dean learns that in Kevin’s madness that he has hidden the tablet and he will not budge and tell Dean where.  When Kevin, once again, shuts himself in his room Naomi shows up and gives Dean a speech that Cas is out of control and that he misinterpreted all of her orders to him.  She pleads with him to trust her and that they are on the same side, but before she flutters away she makes sure that Dean knows that RJ’s road into Hell is through Purgatory.  The news shakes Dean to the core with the thought of his little brother being in Purgatory. 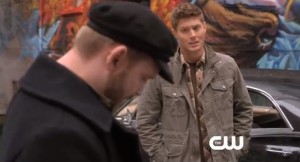 When he discovers that RJ is dead Dean calls an old friend.  Benny is very glad to hear Dean’s voice, but Dean isn’t so convinced that he will be so happy when he finds out what he wants, but surprisingly Benny shows up ready to save Dean’s brother.  He tells Dean that he isn’t a good fit as he doesn’t fit in with vamps or humans.  In order to send Benny back to Purgatory Dean needs to behead his friend, but before sharing a hug he tells him that he will be there when he returns topside, but there is just something in Benny’s eyes.

While trying to figure out what to do Bobby and Sam are attacked but Benny comes to their rescue.  He gets them to the portal and Sam gets Bobby’s soul into his arm, just as Dean did when he escaped Purgatory, and is ready to take Benny as well, but Benny has no intentions of returning.  When three vampires shows up he holds them off while Sam escapes.

When Dean learns that Benny didn’t return he is upset, but something inside him knew that was how it had to play out.  When the boys release Bobby’s soul so it can move onto Heaven, Crowley shows up and stops it from moving beyond the tree line and renders that boys immobile.  However, Naomi shows up and she has more power of Crowley and shoos him off.  Telling Dean that she told him he could trust her she releases Bobby’s soul to Heaven and flutters away.

Back at the ship Kevin is confronted by Crowley who tells him that he found his mom, killed her, but not before she told him where Kevin was.  We hear Kevin scream and when the boys return Kevin and all his stuff is gone.  Dean concludes that the boy has finally lost it and has run.

Well tonight was a good episode.  I can’t believe that a scene with a vampire could get me so emotional but it did.  When Benny said that he would go and get Sam for Dean it was extremely heartbreaking and touching.  It was also so great to see Bobby again.  I so miss his character and I wish they could find a way to bring him back again.  I am extremely excited to see what more they  have install for us this season and what season 9 will bring us.

Well Supernatural is on another break and will air again on 4-24-2013 so until then my Wayward family stay safe and happy.   I know I always leave the clip for the next episode here, but I am unable to find one.