Watching, fighting and changing sides – a review of Buffy Season 9 #20 The Watcher 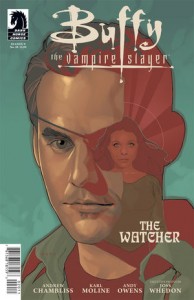 This issue of Buffy season 9 follows Xander into his deep pit of anger with Buffy and everything he thinks she has done, whilst Buffy is reunited with a dear friend. This review includes spoilers

WRITTEN BY: Andrew Chambliss
PENCILS: Karl Moline
INKS: Andy Owens
PUBLISHER: Dark Horse Comics
PRICE: $2.99
RELEASE: April 11th
I liked this issue. I know I have been harping on how much better Angel and Faith is at the moment, but this issue I really did enjoy. Xander is very angry, he can’t stop blaming Buffy for all that has happened. He says he feels powerless and useless he can only watch, not do anything about it. We get a flashback to him nearly killing Angel after he wrung Giles’s neck. Buffy stops him, making him very angry and frustrated. He then walks away from it all to have a chance with Dawn, but still bad things happen to him. Now Dawn is disappearing due to the lack of magic. So to say Xander is super duper angry would be putting it lightly. Nicely he turns into a rather childish Xander who only lets Buffy talk to him via Andrew, you know like a 10 year old would do, “tell Buffy…” even though she is in the same room. This does feel very much like how Xander would behave, he is angry and rather childish, but still very loving.
In his anger he rushes off and gets pulled away from time and space by angry slayer Simone and her new best buddy The Siphon. They have a plan and they need Xander’s help. With Illyria’s time travelling power they want to travel back in time and stop Twilight (I hope to god they are talking about the awful book and film here rather than Angel in a mask). To do this they need the book of Vampyr and they want Xander to finger it. Xander insists that even though he has an eye patch which might up his villain status, he is not a bad guy. But.. it ends with him saying he is in! Ohhh naughty!
Meanwhile Buffy is upset and looking for Xander, when a witch nearly crashes on her Dorothy stylee. The two girls have an emotional reunion and a good cry when Buffy tells Willow about Dawn. Willow then unveils that she is once again magical and the waterworks start again. Buffy suddenly sees some hope in the world.
So we have two more comics left in Season 9 and then it is all over with! It seems to be picking up now, I don’t know how it will go, time travel success to before Twilight would render this whole series useless more or less. But I guess things before the craziness of Twilight were a bit better too. Not sure how it will end, but I am excited about it. This issue had a guest artist in the form of Karl Moline. Now I have been slagging off Jeanty and his artwork quite a bit in my reviews. Moline’s stuff is nice, but I don’t feel the people look much like they should, but I do like his style. Anyway, this issue is a good ‘un, so go out and get it!