A ranch hand is checking the cattle when he comes across one dead, its body ripped open. He then sees a blue, glowing creature in the distance and goes for his gun. Suddenly, the blue creature is right next to him and attacks him, shoving him against a sharp post on his ATV. The creature runs off with a bag of innards just as the farmer arrives to find his dead ranch hand. 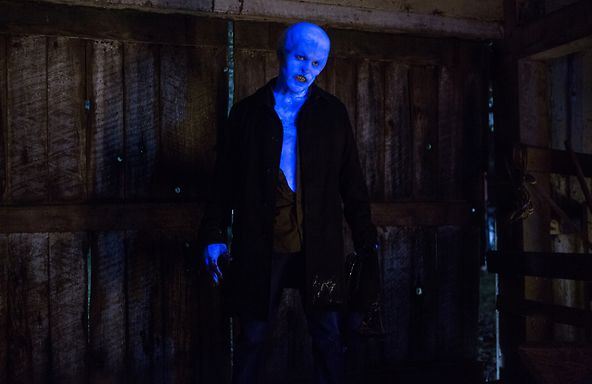 Monroe and Rosalee are having a little romantic moment in Monroe’s kitchen when Nick arrives home and inadvertently spoils the mood. After Rosalee leaves, Nick apologizes but Monroe tells him not to worry about it and asks what’s wrong. Nick shows him the key and the bit of map that it produces – which oddly enough looks familiar to Monroe. His great-grandfather was a cartographer and he inherited the maps he’d made. He shows Nick a map of Swabia in Bavaria, and they put the part of the key map they have against that map, finding that it’s in the Black Forest area of Germany.

The blue creature – a Gluhenvolk named Vincent – brings his haul back to the mother of his child, Jocelyn. She devours the raw meat but gets upset when Vincent tells her they have to move again soon – she’s almost to term and it’s really difficult on her body. A few hundred miles from Portland, a UFO hunter hears about the cattle attack and starts driving… 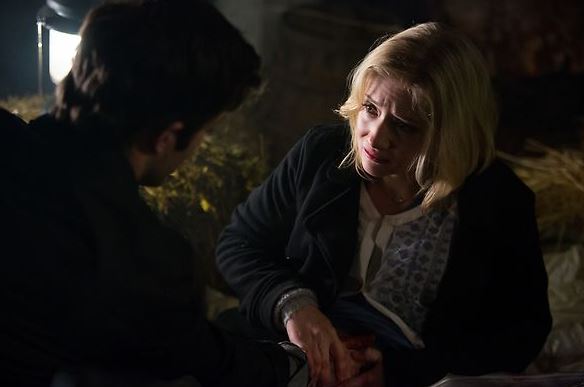 Juliette is still trying to remember Nick, but at her own pace. She looks at an old photograph and remembers it was the first time they’d said, “I love you” to each other. She then decides to visit Monroe, grateful that Nick isn’t home. She tells Monroe that she remembers her love for Nick, but she’s afraid she’s treated him so badly he won’t ever love her again. Monroe tells her that she just has to tell Nick – but Juliette isn’t quite ready for that yet. Then she asks Monroe to tell her what a Grimm is… He’s visibly shaken, but answers her: A Grimm is someone who can see into the heart of darkness, someone who sees things other people don’t understand. He’s different.

Meanwhile, Nick and Renard have a little heart-to-heart about the keys and the Royal families. There are seven keys: Nick has one, the families have four (one of which they tortured an ancestor of Nick’s to get), and two are unaccounted for. When the seven keys are merged, the location of a great treasure is revealed, but no one knows exactly what it is. Some think it’s the secret of alchemy, others think it’s the secret of everlasting life, the sword of Muhammad, or  the nails from Christ’s cross – but whatever it is, it’s very powerful. The two briefly discuss the fact that Renard is not particularly loved by the Royal half of his family and that he wants to keep his relatives from getting Nick’s key. Sgt. Wu interrupts them with a new case – supposedly an alien life form is mutilating cattle and now has killed a man. 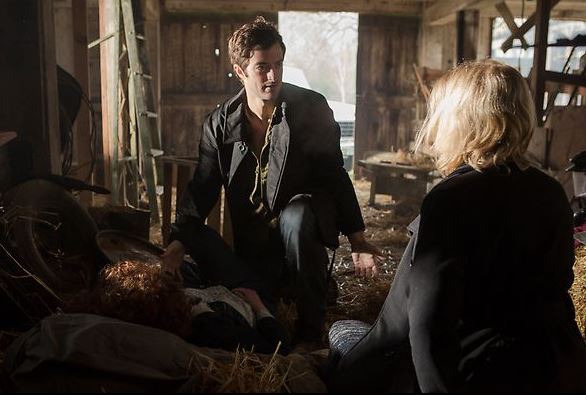 Vincent’s car won’t start, so out of desperation he goes to stand in the middle of the nearest road, fully morphed. The next driver that comes along is shocked by his appearance and runs off the road. Vincent steals the woman’s car and leaves her at their former hideout before leaving with Jocelyn, who is very concerned for the woman.  They drive a bit and come across an old, seemingly abandoned cabin. Vincent quickly gets Jocelyn settled there – but she’s hungry again.

Nick and Sgt. Wu head out to the ranch and speak to the owner, who tells them that he saw a glowing blue being running in the distance after he found six cattle and his ranch hand dead. Sgt. Wu and Nick check the fence around the property and find a small piece of blue skin hanging on the barbed wire fence. They snag the sample for testing and then run into the UFO hunter, George. He wants information and offers to tell Nick and Sgt. Wu about similar attacks across the country, but they aren’t interested in his help. 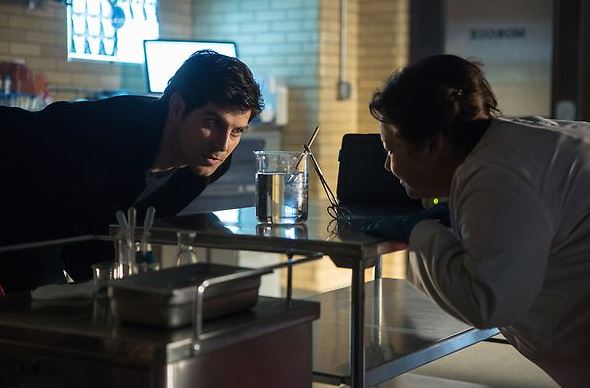 Forensics discovers that the skin sample contains luciferase, which is the chemical found in animals that produces bioluminescence. But does seem to be human skin, so they’re baffled. Sgt. Wu then calls Nick to let him know they have another witness – the woman whose truck was stolen. Nick talks to her while Sgt. Wu investigates other cattle mutilations, discovering that they started in Nebraska two weeks before and have been moving west since that time. 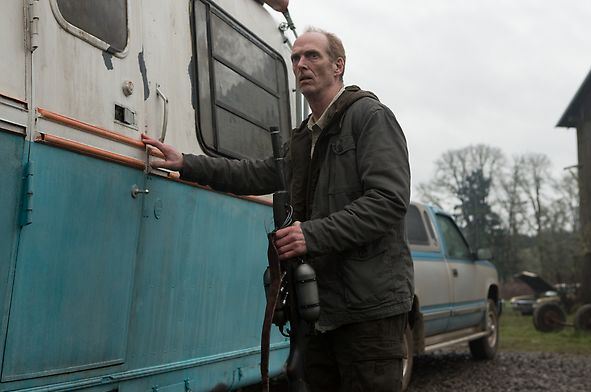 George sticks around to talk to the ranch owner after the police leave. He shows the man photos of aliens and asks if any of them look like the creature he saw, and luckily for George, there’s a match. He then finds the old barn where Vincent and Jocelyn had been hiding in when he gets a phone call. There are already four bidders interested in the baby, but George has to find them first. Frustrated, he morphs into a Raub-Kondor. 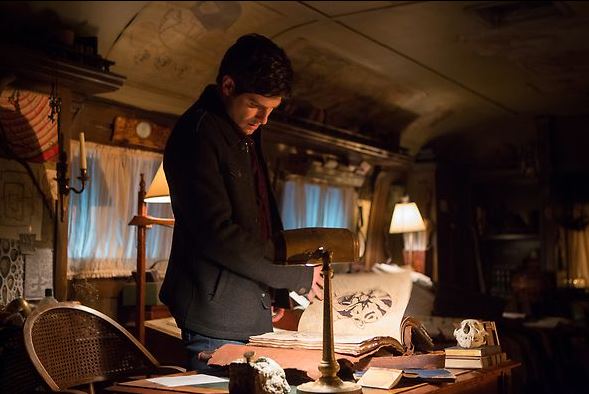 Nick’s at the trailer when Sgt. Wu calls with the test results – the ovaries were the only organs taken from the cows. But why? He finds a page on the Gluhenvolk in one of Aunt Marie’s books and goes to the spice shop to discuss things with Rosalee. She’s very surprised because Gluhenvolk are supposed to be extinct – they were hunted for their skin. When Nick tells her that the mutilations all resulted in the cows’ ovaries being taken, Rosalee pulls out a book of her own – Gluhenvolk females need to eat cow ovaries while pregnant, and the number of mutilations means that this Gluhenvolk is going to go into labor anytime now. Monroe arrives and seeing Nick, realizes that his date with Rosalee is postponed. Together they figure out where they think the Gluhenvolks are and head out to help them.

Vincent is out again, trying to find a cow to get ovaries from for Jocelyn. But George is watching him, and he has a gun. Nick, Rosalee and Monroe come across George’s trailer and investigate. They quickly realize that George isn’t a UFO hunter – he’s a Wesen hunter who kills his prey with a special solution that keeps the Wesen morphed after death for about 6 hours. That’s enough time for him to butcher the Wesen and taxidermy the remains, then sell to the highest bidder. The three quickly realize that they need to find the Gluhenvolks before George does. 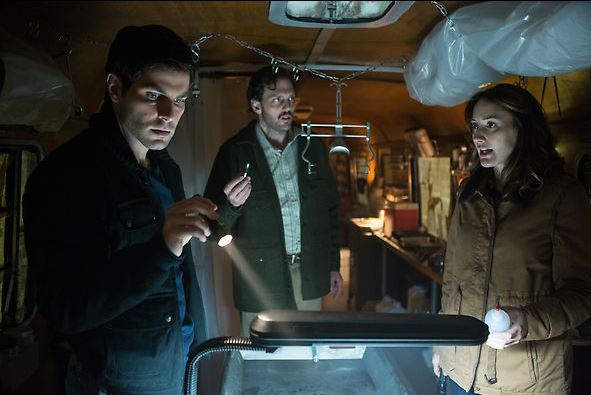 George tries to shoot Vincent, but he hits the bag of ovaries instead. Rosalee, Monroe and Nick arrive at the cabin and shock Jocelyn into labor. Nick heads out to get the first aid kit from the car, then rushes back in. Vincent sees him and rushes in moments later, just in time to hold Jocelyn’s hand as their baby is born. Then George arrives and points his gun at the group and newborn Gluhenvolk. Everyone morphs in reaction to the threat, and when Rosalee does, she asks how much she’s worth. George says she’s worth more than a Blutbad, and then Nick asks how much a Grimm is worth. The shock is enough to give Monroe the chance to attack George, but George hits him with a board. When George heads back in the room, Nick shoots him with his own gun. A few hours later, they see the Gluhenvolk family safely on their way to Alaska. 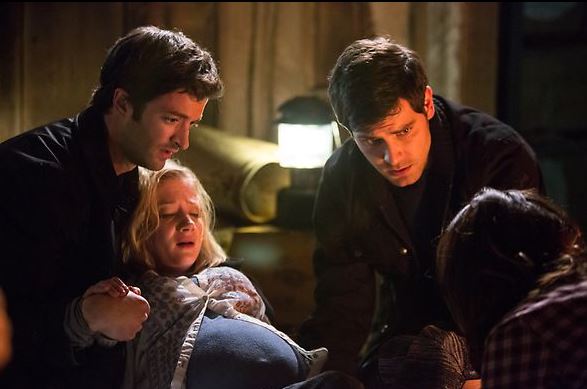 They put George’s still-morphed body in the truck Vincent had stolen, and Nick alerts the authorities. The SWAT team arrives just in time to see George morphed, and they all back off, thinking they’ve got a real alien – and that’s when his body morphs back to human. 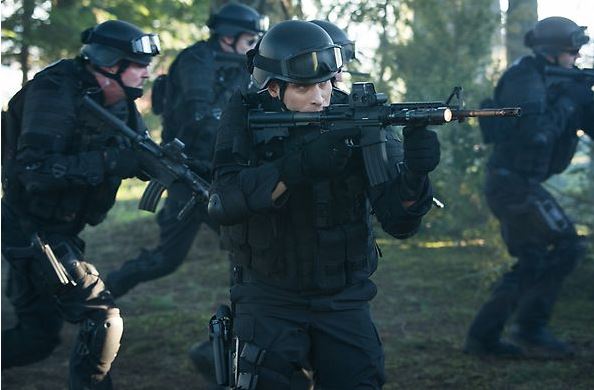 I absolutely love this Grimm take on animal mutilations and supposed aliens! The fact that it tied into a supposedly extinct Wesen species made it even more fascinating. That said, the idea of one group of Wesen killing others for their skins… it’s absolutely horrific, but a great social statement. It also shows that although most Wesen manage to live together peacefully, there are clearly some Wesen who are cruel to other Wesen. They’re not so un-human after all, sadly.

FINALLY we learn a little more about the keys and the Royals! Not nearly enough, but it’s a start. The big question, of course, is who has the two keys that are unaccounted for? Other Grimms? Random humans? Royals who aren’t sharing? We don’t know yet, but I suspect we’ll find out in season three…

How I wish we’d seen more of the Juliette/Monroe scene where she asks about Grimms. Is that really all that was said?! Here’s hoping Juliette manages to find her courage and ask Nick herself – perhaps after telling him that she remembers him and remembers their love. One step at a time, but come on already!!

It looks as though Nick will get a taste of what Juliette’s been through next week… don’t forget to tune in on Tuesday night!