Eric and the Baron are having a meal in Eric’s hotel room. The Baron tells him that things will be ready by the next night, and then Eric asks a favor – he wants to see how the Baron enslaves people. The Baron agrees and Eric calls one of his guards in, then watches as the Baron woges and spits his poison into the guard’s face, causing him to fall over and begin to go into convulsions.

Nick and Juliette are at her house, but both are too nervous for dinner. They begin to talk and both say that they love one another, and then Juliette decides that Nick is talking too much and puts a stop to that with a kiss. At Monroe’s house, Rosalee and Monroe are having dinner. Monroe is obviously nervous and tries to start doing the dishes, but Rosalee kisses him and suggests that they do the dishes in the morning. 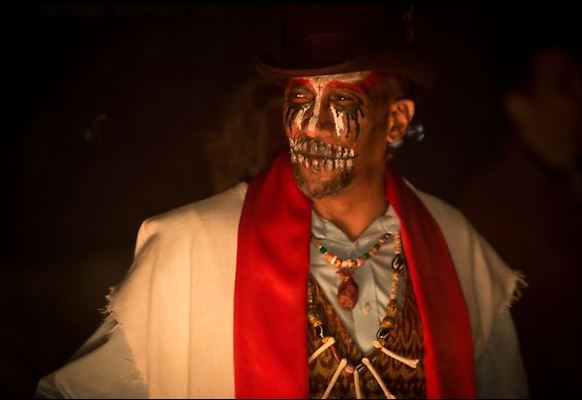 Baron Samedi gives final instructions to his zombies and then sends them out to wreak havoc in Portland. The zombies head into the city, hurting people, causing car accidents and more.

Captain Renard is in his office when he gets a message from his spy. He calls him from a second phone and the man tells him about the documents he found in Eric’s desk, then sends him copies.

Back in Austria, Frau Pech is mixing up a nasty-looking potion. Adalind is having her dinner delivered to her hotel room, and Frau Pech is waiting for the busboy. She goes into the room and Adalind is passed out on the floor, and she then takes a syringe-full of spinal fluid from the back of Adalind’s neck. 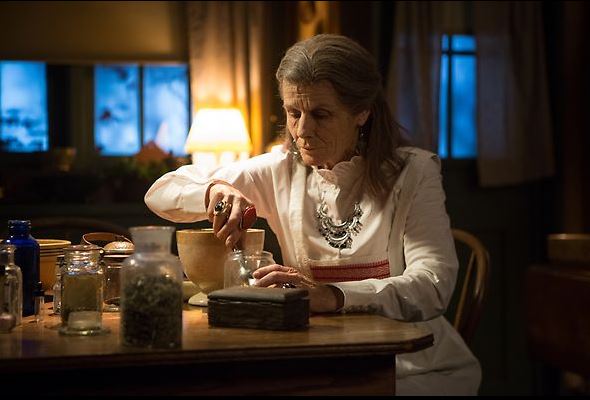 Juliette and Nick are having coffee the next morning when Captain Renard calls and tells Nick they need to talk in person. Nick goes to the station and Captain Renard tells him that Eric is in town and shows him the documents his spy sent. At that moment, Eric calls to arrange dinner with Sean that night while Nick listens in. Before they can discuss things further, Sgt. Wu comes in to tell them that there have been a lot of calls about attacks and property damage – they sound similar to the drug-induced problems in their most recent case. Nick heads out to the crime scene with Sgt. Wu. 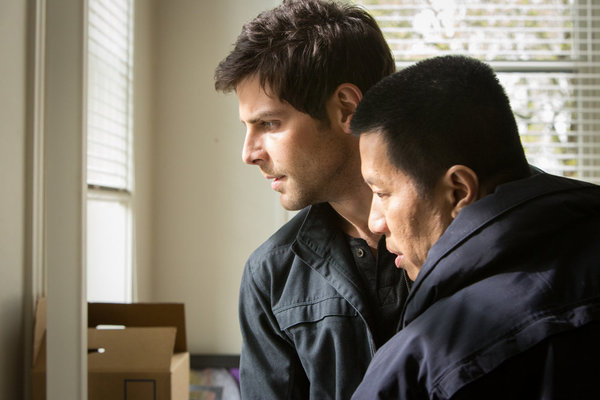 Nick and Sgt. Wu go into the cafe that’s been all but destroyed, looking for the two people who did the damage. They hear sounds and go upstairs, and Lily grabs Sgt. Wu’s leg and pulls him down while biting him. Nick chases her into another room and she comes running at him…and jumps out the window behind him. Out on the street, it takes three officers to handcuff her. Nick is about to go downstairs when one of the male zombies comes at him. They fight for a bit and then Nick shoves him headfirst into a brick wall, which does knock him out. At that moment, Hank finally makes it up the stairs, and Nick tells him to bring his car around – they’re bringing this guy to the spice shop. 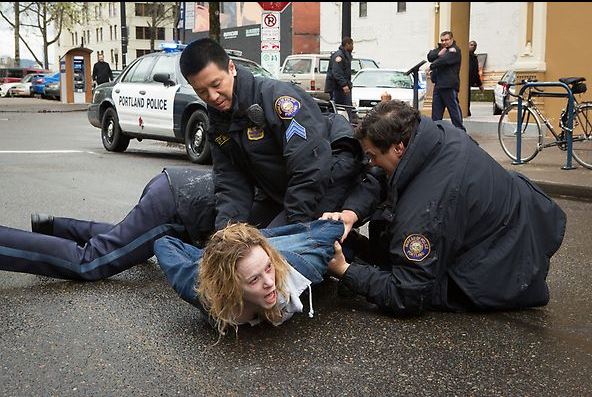 At the spice shop, Nick explains that the man is one of the victims of the Baron, and he’s wondering if Rosalee knows anything about how to cure people who’ve been affected. Rosalee consults one of her books and finds the type of trance the Cracher-Mortel causes. There’s a way to cure these people, but they have to be in the final stage of the poison’s effects – and they have to get 3 simultaneous shots of the cure. Hank and Nick go back to the station while Rosalee and Monroe make the potion. It’s nearly finished when the man wakes up and, despite being handcuffed, starts wrecking the shop. Monroe punches him and then Rosalee gives him the shot.

Back at the station, Nick and Hank find out who the guy at the spice shop is – he’s a tow truck driver. His boss comes in with the recording of the last tow he was supposed to be helping the day before. To no one’s surprise, they hear the Baron’s voice giving his information. Meanwhile in Austria, Frau Pech has taken Adalind’s spinal fluid and added it to her potion, which she then drinks. The potion transforms her into Adalind, and Adalind into Frau Pech. Adalind’s phone rings, and Frau Pech answers, sounding just like Adalind. It’s Stefania, telling her that they’ve found a way to deal with Frau Pech. 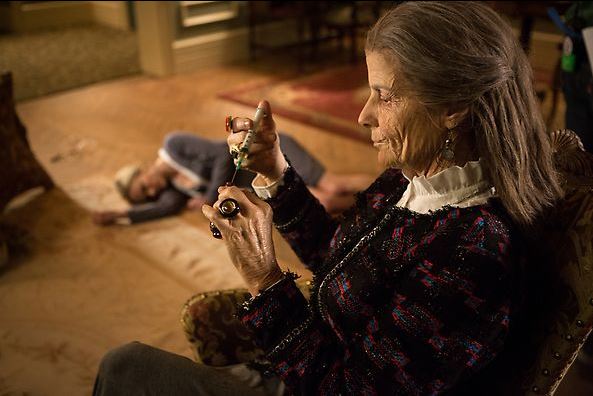 Sgt. Wu tells Hank and Nick that they’ve found the car the Baron had when he called for a tow, only it belonged to one of his other victims. They go to check the car out before it’s impounded. They open the trunk and it’s full of voodoo dolls and candles, but they don’t understand why it was just left there. Nick thinks the Baron is playing with them.

Sean arrives for his dinner meeting with Eric. Eric’s guard attempts to search Sean for weapons, but he refuses and is about to leave when Eric comes out and tells the guard it’s okay. Eric then leads Sean into a room in the suite where dinner is waiting. After a few jabs at Sean’s mother, Eric gets down to business: the family wants Sean to come home. There are big things happening, and a good position is waiting for him, no matter that he’s a bastard. Sean simply says that he’ll think about it.

The tow truck driver wakes up at the spice shop. Monroe and Rosalee are somewhat amazed that it worked. Nick heads to Juliette’s for dinner. When she asks how his day was, Nick tells her that it was long. She pushes him to tell her more, and he does, though he feels awkward. Juliette then tells him that she wants him to move back in! Monroe calls then to tell Nick that the guy is awake and Nick needs to get down there. Juliette then says she’s going, too – she needs to learn.

Frau Pech – looking like Adalind – goes to see Stefania. Stefania tells her all about how they’re going to kill Frau Pech – for Adalind to get her powers back, they need the still-beating heart of a Hexenbiest. Somehow, Stefania sees through the Adalind-mask and strangles Frau Pech, then plunges a knife into her chest. Back at the hotel, Adalind wakes from whatever potion Frau Pech had given her. Upon seeing Frau Pech’s shoes and clothes on the floor, she smiles and says, “Ding dong the witch is dead… and another one’s coming back.”

Nick and Juliette go to the spice shop. Monroe and Rosalee are startled that Juliette is there, but Nick just begins questioning Al. He doesn’t remember much, but he remembers the Baron’s top hat, seeing a lot of green, being around a lot of other people like him, and a loud horn. Nick makes the connection to the containers near the shipyard, which was where the car was left. He tells Monroe and Rosalee that they need to make a lot of more of the potion, and Juliette offers to help – she’s a vet, so she knows about medicines and giving injections. 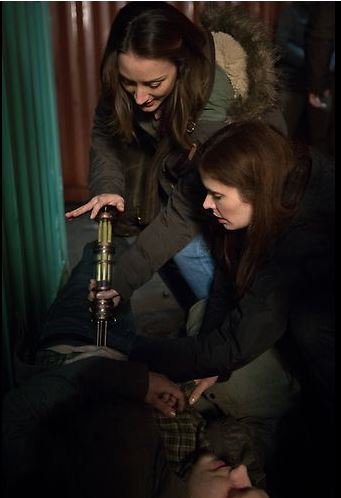 Monroe, Nick, Rosalee and Juliette drive over to the shipyards and start checking containers. The Baron is there and once he sees them, he opens one of the containers and lets the zombies out. Soon enough, the group runs into the zombies. Nick and Monroe knock as many of them out as they can so that Rosalee and Juliette can give them the shots. They manage to cure quite a few, but the Baron opens another container of zombies and they’re quickly outnumbered. They run back towards the car, but Nick takes a different route and comes across the Baron. The two do a bit of swordfighting which eventually leads to them both taking a tumble down into a container. Nick finds a coffin and inside is a passport with his photo on it. He looks up just in time to see the Baron woge and then spit his venom into his face. Juliette is freaking out because Nick isn’t with them, but they realize they have to try to leave – the zombies are swarming all over the car. Then Eric appears to pick up the now-appearing-dead Nick for their flight. 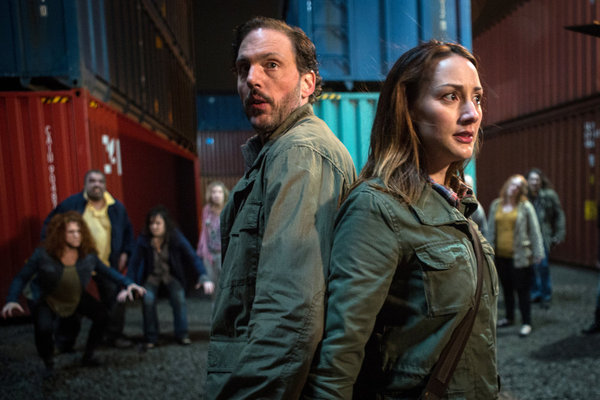 TO BE CONTINUED… OH COME ON, YOU KNEW THIS WAS COMING. Yes, yes I did – but that doesn’t mean I have to like it!! It’s going to be a long few months, that’s for sure.

So… Nick’s not dead, but if they manage to get him on that plane to Austria, it’s not going to be good. The Royals no doubt want the key and then want Nick dead, so somehow they’ll have to get him to reveal that Rosalee has the key – also not good – then they get it, probably killing more people in the process, and then they kill Nick. This isn’t going to happen, but it’s going to be interesting to see how the writers get out of this one.

Well, Adalind and Stefania have solidified their partnership by getting rid of Frau Pech. These two are even more scary now than they were as wary business associates. Now it seems nothing will stop Adalind from getting her powers back – and that will mean bad things for many people. One interesting question is what will Sean – and possibly Eric – do when they can’t find out anything further about the mother-to-be of a royal? Chances are that Frau Pech’s body won’t be found – unless it fits Stefania’s plans to have it be found. And at some point, Adalind will have to disappear because she’ll be too obviously pregnant.

At least Nick and Juliette were finally back together before this happened, plus Juliette is getting more involved in the Grimm side of things. She’s a veterinarian, so she’s got great skills – maybe she and Rosalee need to work together, treating Wesen! Providing Nick’s okay, of course. Rosalee and Monroe are together and happy, too… but how long will it last, Grimm writers?

And then we have Eric and Sean… will blood be thicker than water? Will Sean decide to give the family a chance, or will he somehow help to save Nick? Sadly, we’ll have to wonder for a while… 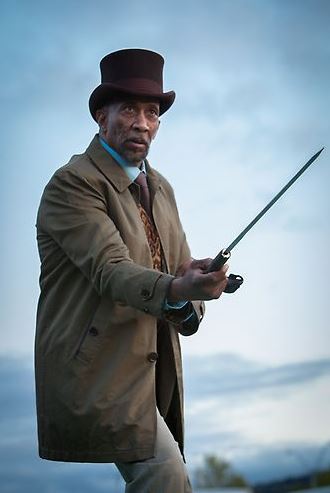