Adalind and Eric are just starting to get intimate when they’re interrupted by a call from a king – Eric’s (and Sean’s) father. Adalind eavesdrops on the conversation, hearing what sounds like a plan that will affect Sean in Portland. He also makes a comment about his father having also slept with a Hexenbiest, saying “Look where that got us.” Adalind suddenly looks worried…

Back in Portland, Nick is driving Juliette home from the station after she broke the spell of the Musai. Juliette finally gets the chance to tell Nick that she’s remembering him – and that she’s sorry for how she’s treated him. He tells her he understands and that she doesn’t need to apologize, but she insists, knowing how hard it must’ve been for him to hear her saying so many awful things when she couldn’t remember him. She asks that they take it slow, but hopes he’ll want to take the chance – and then asks him if they can try dinner again the next night. Nick agrees, and they share a few kisses. 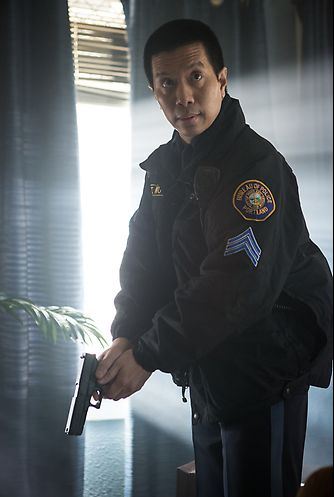 The next day, Sgt. Wu and his partner are called out on a domestic violence report. A coyotl is inside, trashing the house, but he demorphs and hides when he hears the sirens. The officers find a dead woman on the floor, and then suddenly the man appears, attacking them. Sgt. Wu’s partner shoots the man dead, but his eyes are red and he’s got something green coming out of his nose. Sgt. Wu calls in Nick and Hank, who are baffled by the dead woman – there’s no apparent cause of death. When they see the man’s body, Hank guesses he was on drugs. As they leave the scene, Nick notices an older man in a top hat and green coat.

Meanwhile in Vienna, Stefania pays Adalind a visit. She tells Adalind that there is a way for her to get her powers back after she gives birth to a healthy child, and gives her a contract written in Vlax Romani to sign. Adalind refuses – she’s a lawyer and she’s not signing anything she can’t read. Then Stefania forces her hand onto the paper and it painfully pulls blood from Adalind’s hand – she’s now bound to an agreement which she has no details on. Frau Pech is lurking in the corridor and sees Stefania leave. The next day, Frau Pech accosts Adalind in a restaurant, telling her that it’s unwise to betray her. She says that Adalind shouldn’t trust Stefania, and that if it becomes known that she’s carrying royal blood, she might be worth more dead than alive. 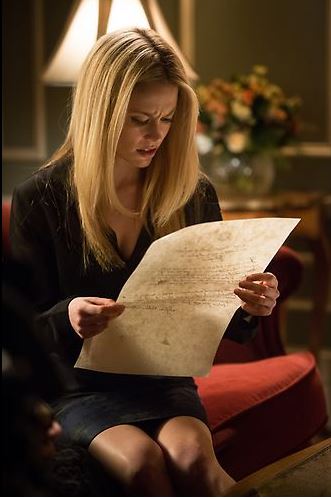 Back at the station, Nick and Hank run the prints on the man and the woman from the house. The report on the woman comes back with a long list of solicitation and drug charges, and the man had some fraud charges in the past. The strange thing, however, is that there’s already a death certificate on the man that’s dated 3 days ago. The fingerprints match – surely it’s a clerical error. They go down to check with the medical examiner, who says it must be a clerical error. She also tells them that they’re running a tox screen to find out what the guy was on – it’s not any of the typical drugs they see.

Monroe is at home working on some watch repairs when Juliette arrives and tells him that she has another favor to ask of him. She reminds him that Nick has brought her to Monroe’s house the night she went into the coma, and wants to see what Nick wanted him to show her that night – and she’s not leaving until he shows her. Then Bud comes out of the kitchen – he’s there trying to repair Monroe’s refrigerator. Monroe tells Bud that Juliette came for a woge (the Wesen term for morph), and Bud freaks out. Juliette tells Bud that she’s not scared, but he tells her that’s just because she doesn’t know – and Monroe says that maybe it’s time she did. Bud then says that they should do it in the spice shop with Rosalee, and Monroe agrees – and says Bud has to come along, too. 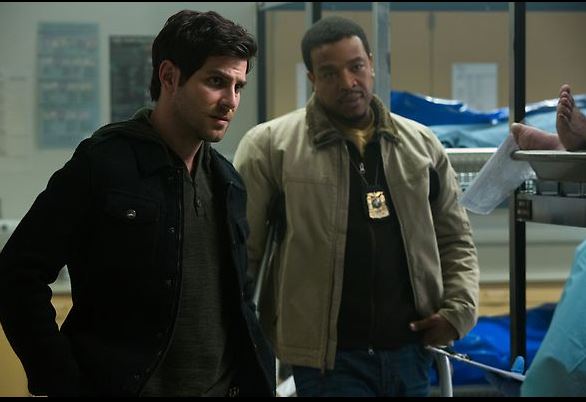 Hank and Nick head to the hospital where their twice-dead man was first pronounced dead. The ER doctor doesn’t recognize him, but he sees so many people that isn’t surprising. However, he’s still supposed to be in their morgue, so the two head down there. Then Nick sees the man in the top hat, but he’s gone before he can catch up to him. He tells Hank that he could’ve sworn he’d seen the same guy at the crime scene that morning. In the morgue, the body is missing – and the attendant has no explanation as to how it could’ve happened. Back at the medical examiner’s office, the M.E. is about to start the autopsy on the dead woman when she suddenly sits up on the table. 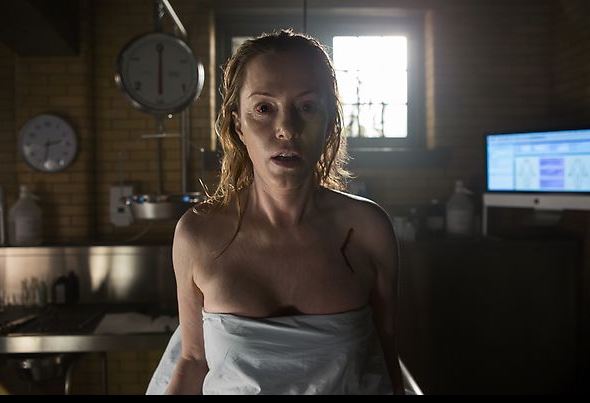 Juliette, Monroe and Bud arrive at the spice shop and explain to Rosalee what Juliette wants. Bud is hoping Rosalee will talk Monroe and Juliette out of it, but Rosalee agrees – she doesn’t want to lie to Juliette anymore, either. Monroe’s about to woge when Rosalee stops him, saying she should go first. Monroe agrees, and Rosalee asks if Juliette has ever heard of  a Fuchsbau. Rosalee assures her that no matter what she sees, it’s still her – and then she woges. Juliette runs out the door, but before any of them can go after her, she comes back in. They then suggest that Bud go before Monroe, and he reluctantly – and somewhat accidentally – woges and tells her that he’s an Eisbiber. Monroe finally shows her his Blutbad self, and she’s a little more startled, but doesn’t freak out. She then asks if Nick is a Wesen, too, but they all protest and tell her no, that Nick is a Grimm – he’s human like she is, he just has the ability to see Wesen, and they can tell he’s a Grimm. Juliette then asks if Rosalee has anything to drink, and suddenly everyone’s relieved.

Adalind calls Stefania and tells her about Frau Pech’s threats and asks what she’s going to do about it. Stefania reassures Adalind that she’ll talk to Frau Pech and handle things – then once she’s off the call, she throws things around the room in anger at Frau Pech. Meanwhile, Frau Pech is meeting with Sean Renard’s castle spy, who openly works for his brother, Eric. She tells him that a royal baby is being shopped around and wants an appointment with Eric to discuss a price. He calls Sean first, and Sean says they’d be foolish not to make a counteroffer to Eric’s eventual offer.

When Nick and Hank get back to the station, Sgt. Wu tells them the amazing news – the dead woman isn’t dead anymore, and she’s in the ICU at a local hospital. The two head there, only to find the woman’s bed empty. They head to security to see if the recordings can tell them what happened to her. They do spot her on the tapes, being wheeled out of the hospital by the man in the top hat. Sgt. Wu calls Nick with the results of the tox screen, and it turns out the man had a large amount of powerful hallucinogen called Datura in his body. Datura causes the Lazarus effect, making a person seem dead for hours before they awaken sometime later. 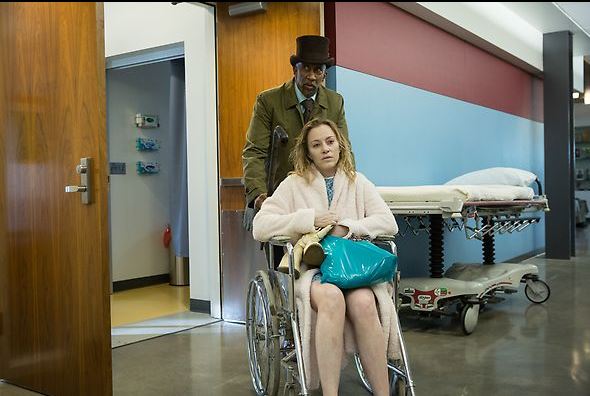 The man in the top hat, Baron Samedi, is waiting for a tow truck on the side of the road. When the driver arrives, his car immediately turns over, and that’s when the Baron woges into a Cracher-Mortel (puffer fish Wesen), and spits green goo all over the man’s face. Meanwhile, Hank and Nick are having lunch in Aunt Marie’s trailer while they research. They find an entry on the Cracher-Mortel, and realize that he makes zombies. Then Monroe calls Nick and asks him to stop by the spice shop. Nick asks if he can bring Hank, and Monroe says that’s even better. Then the Baron gets on to a public bus and spits his poison on to the passengers. The Baron then leads his newest zombies into a large cargo container, telling them to rest – their mardi gras is coming soon.

Captain Renard is in his office when his phone rings – it’s Eric, and he’s just arrived in Portland. He tells Sean that he’ll call tomorrow to finalize their ‘family time.’ Sean then calls his spy and asks why he didn’t tell him that Eric was coming to Portland. The spy is shocked – he didn’t know. Sean tells him to find out what’s going on – it’s clear that the family is going to make a move.

Nick and Hank head back to the station to fill in Captain Renard on their suspicions that the man they’re looking for is a Wesen called a Cracher-Mortel, but they agree that his actions so far don’t make any sense. In Vienna, Sean’s spy is searching through Eric’s documents. He finds passports with no photos and death certificates and quickly snaps photos of them.

Finally able to make it to the spice shop, Monroe, Rosalee and Bud explain that Juliette knows and that they all woged for her. Nick’s a little taken aback, but he realizes that this is what he wanted – for Juliette to know the truth so he wouldn’t have to lie to her anymore. They discuss the fact that some people can’t handle it, but so far, they think she’s doing well. Nick heads to Juliette’s house for dinner, hoping for the best. When he hands her the flowers he’s brought, she tells him that she should go put them in water before they woge. Nick looks relieved and follows her inside.

Eric is at his hotel in Portland when a visitor arrives – Baron Samedi – and they hug like old friends. 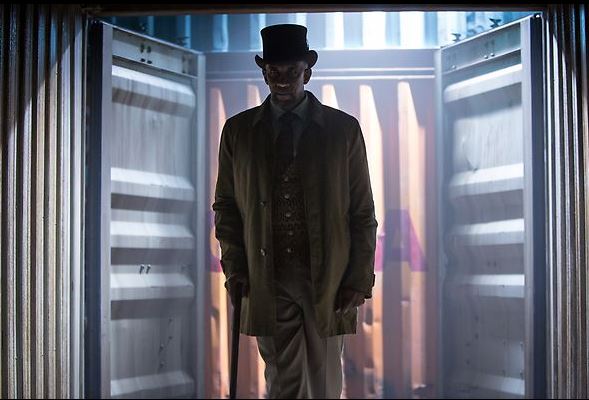 WOW. I did not see the partnership between the Baron and Eric coming at all! My guess is that the Baron will release his zombies on Portland, then Eric will tell Sean he can make it stop – but only if he’s given Nick’s key. I could certainly be wrong, but one way or another, this is not going to be pretty…

I thought the way they handled Juliette seeing Wesen for the first time was great. Even somewhat prepared like she was, a certain amount of shock is completely understandable. It also makes sense that at this point, she can handle it. She’s been through enough that her mind is open to more possibilities. She has a lot more to learn, but the difference is that she’s willing to learn. I think this will ultimately make their relationship stronger.

The Adalind situation is getting ugly, and it seems like things are quickly spiraling out of her control. Since she has no idea what that contract says, who knows what Stefania is going to do to her and the baby? And if Frau Pech goes through with her threat, Eric would certainly have her killed. What would Sean do? That’s a more murky question, but she still has to give the baby to Stefania, both because of the contract and because she appears to be the only one who can get Adalind her powers back. I forsee this plotline getting even more interesting next season…

Next week is the season finale! Be sure you tune in for more zombies and, most likely, a big cliffhanger!