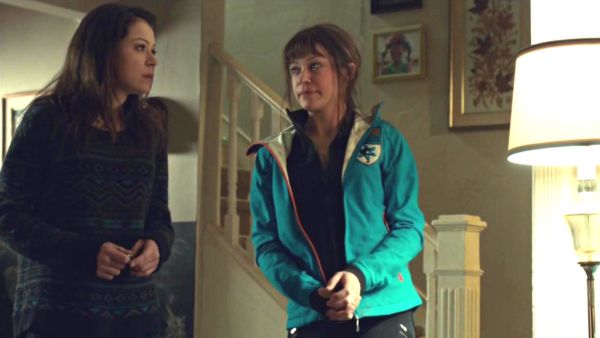 Art and Angie are still trying to figure out how their Jane Doe looks exactly like Beth.  Last week they identified her as Sarah Manning and they track down Mrs. S to ask her some questions.  Mrs. S doesn’t crack when confronted with the “death” of her stepdaughter, she’s smart enough to keep things to herself. 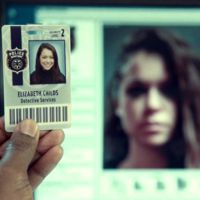 In the process of investigating the name Sarah Manning they find she’s listed has having committed suicide just a few days before.  Now they’re wondering if Beth is maybe one of triplets, but Angie is especially suspicious.  They call Sarah/Beth in to the station and present her with what they’ve found, but like her stepmother she acts as if she knows nothing. 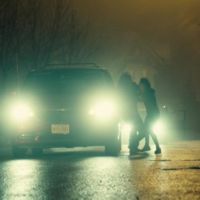 Alison has decided to divorce Donnie and is at odds with nosy neighbor Aynesley.  She ends up smoking pot and having sex with Aynesley’s husband, Chad, in the couple’s minivan right in the parking lot of the skating rink where their kids practice.

Alison and Aynesley have a huge cat fight in the middle of the streets of their suburban neighborhood in plain view of their very startled neighbors.  Appropriately enough, the radio of Alison’s minivan was playing “Bitch” by Meredith Brooks.  Some time later a very drunk Alison shows up at Felix’s loft and says, “Bad things have happened to me.”  High/drunk Alison is entertaining as hell.

Olivier is face-down in a special bed being treated for his “tailectomy.”  Paul dug up some dirt on his handler and now has him by the, um, tail.  It turns out Olivier’s real name is Kevin and he’s some scumbag sex offender.  Paul blackmails him into not telling Leekie about Sarah at the club, only Helena.  He’s still trying to protect Sarah and I’m firmly convinced Paul is a decent guy at his core.  Olivier complies and tells Leekie the modified tale of only one clone at the club. 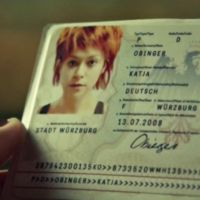 Cosima may be playing Delphine to keep her enemy close, as it were, but Delphine is doing the same.  At the urging of Dr. Leekie she’s speeding up her attempts to get close to Cosima and the two end up having sex.  Delphine cries afterward, saying she does the same when she has sex with boys.  I wonder if the tears aren’t from guilt?  Maybe Delphine is really beginning to have feelings for Cosima.  It happened with Sarah and Paul, so it wouldn’t be the first time.

Either way, as soon as Cosima leaves to get ice cream Delphine goes rummaging for the file with all the names of the clones on it and passes along those names to Leekie, but she insists he promises Cosima’s safety.  He takes note of only the name “Sarah Manning” for some reason.  Probably because he’s not familiar with her?

Helena is still in possession of Sarah’s leather jacket from last week’s fake out and tail chopping of Olivier.  She finds a letter in one of the pockets.  It’s from Kira to her mother and has both pictures of the little girl and an address.  The letter really gets to Helena who obviously never had the kind of love most families share.

Sarah takes Alison from Felix’s place and they decide to “come out” to Mrs. S and after the initial shock, she realizes it was Alison who visited Kira a few nights back.  Alison is quite drunk at this point so they take her to the guest bedroom to sleep off her very bad day.

Art and Angie talk to Colin the coroner to get the name of the person who identified “Sarah’s” body.  They give Felix a visit, but he plays stupid just like the rest of his family has done with the police.  After they leave, Art tells Angie he recognizes Felix’s voice.  If you remember, Felix had made a quick call to Art to talk about Sarah, but hung up shortly after Art answered.  Art calls the number and sure enough it’s Felix’s phone, but they wait to move on that information until they know more.

Olivier, alone in his face-down hospital bed, gets a shot from an unknown medical worker which kills him in a frothy-mouthed seizure.

Mrs. S is telling Sarah a little about her past.  She said some of the children they took in as orphans were rumored to have been the subject of medical experiments.  She was told to take her kids and run and that’s about all she knows. 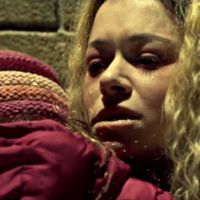 While the two are talking, Kira quietly goes to the front door and see’s Helena looking back at her.  She willingly goes with Helena who is taking her to see Thomas.  For some reason, Kira tells Helena, “You’re just like my mom.”  Kira sees something in Helena and gives her a hug when they stop for a rest in an alleyway.  This touches something deep inside Helena who lets her go, but Kira walks into the street and gets critically injured by a car.

This episode was a little slower in pace than previous ones, but it was anything but boring.  We got to see a really fun side of Alison and a side of Helena that until now we didn’t even know existed.  Kira can sense something in Helena and I think her comment about being “…just like my mom,” has a much more significant meaning that we’ll learn about later.

One little thing:  I really loved that the name of the team Alison coaches is the “Ice Queens.”

With only two episodes left in the first season I have no doubt we’ll be left with many questions to ponder until the start of season 2.  And, yes, in case you haven’t heard, Orphan Black has already been renewed for a second season.  With a show like this it would be a crime not to renew it.  BBC America has a bona-fide hit on their hands.

Felix:  Sorry.  I couldn’t afford lattés for Bonnie and Clyde.

Felix:  Brilliant!  Invite her, too, and maybe we can all cuddle up with Weight Watchers and Grey’s Anatomy.

Felix:  Divorces do really strange things to normal Sarah.  They lose their fake happiness, they forget the way to the mall, and then they come downtown to find themselves.

Alison:  I bet you could bounce me like a ball.
Chad:  What are we doing here?
Alison:  I’m objectifying you, sexually, to get back at Donnie.

Siobhan:  Well, tell me more, love.  I mean, it can’t get any stranger than human cloning.