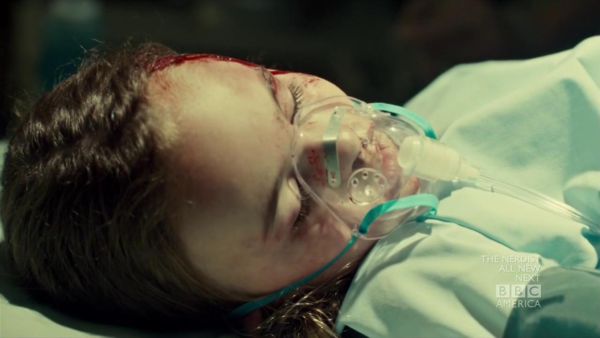 Sarah and the others may be clones, but I’m convinced Kira’s the Littlest Terminator.  It was obvious she got hit hard enough by that car to easily be killed, but the doctor says her ribs are fine and there’s no head trauma?  Something’s up with Clonebaby and it might be even more interesting than the clones themselves.

Cosima has a theory that Kira’s DNA may have been altered to give her extreme healing abilities.  While she doesn’t have a sample of Kira’s DNA, she finds evidence in the clones’ samples that they each have a distinctive genetic marker.  Basically a DNA barcode that allows someone to tell them apart.

Leekie lets Paul know he saw through Olivier’s lie about there only being one clone at the club the night he lost his tail.  He knows Helena’s too wild to fool Paul into thinking she was Beth, but Sarah could have pulled it off.  First thing Paul does is find Sarah and tell her Leekie’s on to her.

They set up a meeting with Leekie at a construction site trailer where Paul brings him blindfolded.  When the blindfold is removed it’s pretty obvious Leekie was previously unaware of Sarah.  In fact, later in the conversation he admits she “got away.” 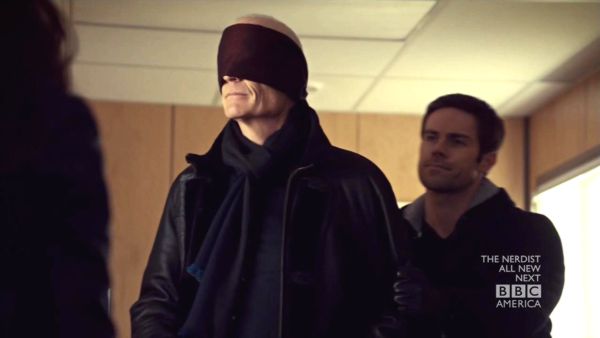 Leekie is more interested in Helena.  Tomas and Maggie Chen were part of a religious cult opposed to Neolutionism.  They found Helena in a convent and trained her to kill the other clones.  Maggie infiltrated the Neolutionist movement to locate the clones for Helena to kill under Tomas’ sadistic supervision.

Leekie tells Sarah he wants Helena so they can deprogram her and then let all the clones live unfettered lives without observation.  I smell a lie.

Meanwhile, Alison is staying at Felix’s apartment because of the turmoil in her life.  The first thing she does is go all June Cleaver on the place and clean the hell out of it, then she talks Felix into going with her back to her house to grab a few necessities.

When they get to Alison’s home, her family, neighbors, and pastor are waiting for her.  Oh boy, it’s an intervention compliments of that bitch Aynesley.  Alison runs upstairs to her bathroom and Felix tells her to just “play possum” and make them all think their little intervention was a success.  Even though she agrees, she instead attacks Aynesley for scrutinizing her life, even using the phrase “laboratory subject” at one point. 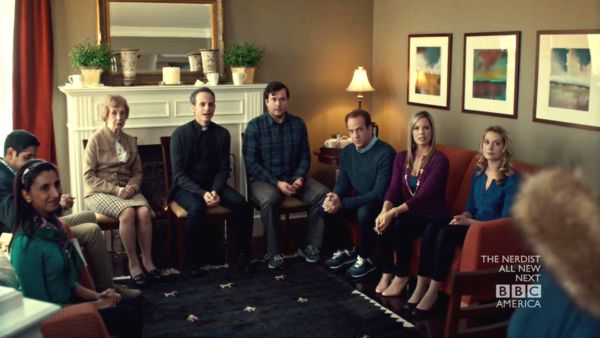 Alison exposes a number of Aynesley’s indiscretions and Donnie calls an end to the intervention.  He even takes a moment to place his hand on Alison’s shoulder as he walks by.  If Donnie’s the monitor, and I’m still not convinced he isn’t, then he’s the best of them all at playing his role.

Cosima, still working as hard at monitoring Delphine as Delphine is monitoring her, discovers the French woman already has her PhD and is working with Leekie.  Delphine admits to monitoring Cosima, but says Leekie told her it’s because the clones are in danger.  That falls in line with what Leekie has been saying, but there’s more to this than just a bunch of benevolent scientists trying to save the poor clones from an assassin.  I mean, this is Orphan Black.  Nothing’s ever that simple.

Delphine tells Cosima that she’s got real feelings for her.  Now we have two clones who’ve turned their monitors into what look like allies.

Art is still trying to make sense out of what’s happening and who all these look-alike women are.  He goes to the train station to review the security camera footage from the night Beth died and sees the look-alike Sarah there taking Beth’s purse after she jumps on the tracks. 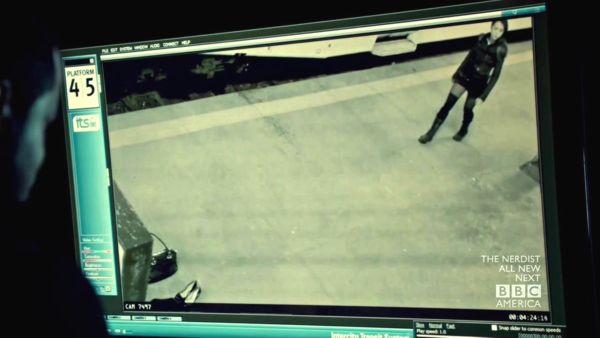 Forgive me if I’m not up on the latest police procedures, but wouldn’t that footage have been one of the first pieces of evidence they would have acquired after the suicide?  Even before anyone had suspicions that there might be something more going on, they should have at least reviewed the tapes to see exactly what happened that night.

Tomas is very unhappy that Helena didn’t bring Kira to him and locks her in a very small cage on his rusty hellboat.  Helena uses her belt and shoestrings to drag her cell phone to the cage and she calls Sarah for help.  Before she leaves, Sarah checks in on Kira who tells her that it wasn’t Helena’s fault and Helena just needs her help.

Sarah takes Paul’s gun from his jacket and goes to the hellboat where she finds Helena in the tiny cage.  She nearly shoots Helena, but decides to let her go instead.  Helena gives her a hug and tells her she loves her.  The poor girl isn’t evil, she’s just been so messed up in the head by Tomas that she hardly knows what’s real and is only beginning to understand love thanks to her moment with Kira in the alleyway.

Before they can leave, Tomas enters and Helena is momentarily confused as to which person to trust.  After some convincing from Sarah that Tomas will lock Kira in a cage and hurt her just like he did with Helena, she attacks Tomas.  Sarah pulls her off him just before she can blind him, then she locks Tomas in the same tiny cage Helena was kept in. 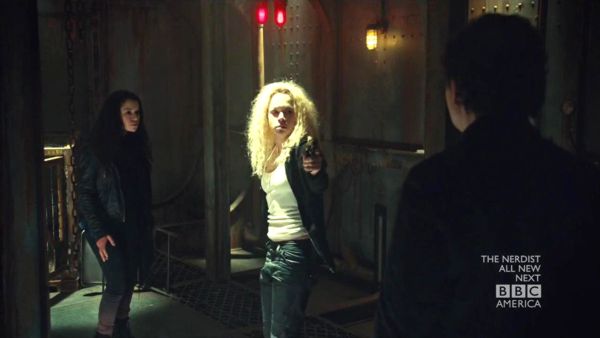 Sarah has Helena in her trunk and is about to deliver her to Leekie when Mrs. S calls and tells her she can’t do that and needs to get to her house immediately.  Leekie shows up at the trailer and when he finds Sarah isn’t there he calls some mysterious woman whose face we never get to see.  I’m guessing that not only is she the puppetmaster, but is also either another clone or the original template from which they all were created.

When Sarah gets to Mrs. S’ house, she introduces her to a South African woman, Amelia.  Amelia is Sarah’s birth mother who was paid by a couple to have their child.  She says when she was pregnant she overheard the couple talking and realized they weren’t parents, but scientists who wanted to do experiments on the baby.

Or in Amelia’s case, babies.  She had twins, giving away one to the state and one to the church.  Yes, Helena and Sarah are literal sisters.

One thing that’s clear is all the clones have a deeply instinctive need to protect Kira.  Every one of them is concerned for her safety and well being.  I wonder if they were somehow “programmed” to all feel that protective instinct perhaps because Kira is the endgame of the clone experiment.  Hopefully next week’s final episode of season one will give us more clues.

One last thing.  I love the way Alison and Felix are becoming besties.  They make a hilarious pair.

Felix:  I need to change.  Fetch me something gay.

Mrs. S:  One of the great things about this country; hunting’s not just for the rich.

Alison:  Well maybe he acts that way because you blew the roofer at the cabin!