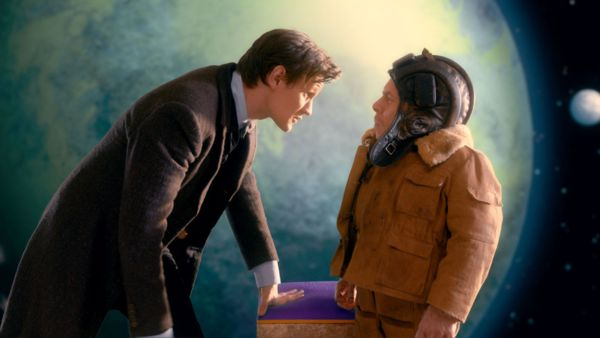 The Cybermen are back (as if we ever doubted they would be) and have been given an upgrade, courtesy of writer Neil Gaiman.  Gaiman’s first crack at penning an episode of Doctor Who was The Doctor’s Wife and it earned him a Hugo Award.  It was also very original and entertaining, so it’ll be fun to see just what new twists he puts on the tyrannical tin men.

I like to be helpful so I’ve gone through the trouble of gathering together a video introduction to Nightmare In Silver with commentary from both Neil Gaiman and Matt Smith, along with a couple of preview videos.  All this to help you prepare to wet your Cyberpants on Saturday.  No need to thank me, just control yourself.

Clara and Porridge take a romantic walk under the stars while Porridge tells her about the Cyber Wars.  “It’s hard to fight an enemy that uses your armies as spare parts.”  Eww!

Here’s your first good look at an upgraded Cyberman in action.  If that’s not enough, you also get to hear Angie whining like a spoiled child.  I’m rooting for the Cybermen after this.  Note the Iron Man-esque glowing chest doohickey.  It’s all the rage with the kids these days.

In “Nightmare in Silver,” Hedgewick’s World of Wonders was once the greatest theme park in the galaxy, but it’s now the dilapidated home to a shabby showman, a chess-playing dwarf (WARWICK DAVIS, Harry Potter films) and a dysfunctional army platoon.

When the Doctor (MATT SMITH), Clara (JENNA-LOUISE COLEMAN, Emmerdale, Captain America: The First Avenger), Artie and Angie arrive, the last thing they expect is the re-emergence of one of the Doctor’s oldest foes. The Cybermen are back!

Doctor Who airs on BBC America Saturday nights at 8/7c, immediately followed by Orphan Black and The Nerdist.