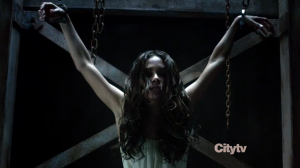 Hello, folks. Sorry for the confusion but due to my final exams I was unable to review last week’s Revolution. So I’m doing it now. Tomorrow, I’ll be putting up this week’s episode review. Got that? So this is last week’s, tomorrow’s will be this weeks. Okay good. So now that I’ve sufficiently confused you, let’s get down to my snarky and sarcastic recap/review. I promise you this week’s episode was no better than last week’s. (Sorry, it’s true) So look forward to it!

We open with Nora being imprisoned at Monroe’s base, just as we ended last week. Over dinner, Monroe requests to know where Miles and company are. Nora decides it would be smarter to try and hit Monroe over the head with a wine bottle. This leads to some horrible torture. On day one, she politely informs her prison guard that Miles is “banging his mother.” Waterboarding time. Fast forward to three weeks later and she’s still not broken yet. Monroe sends in Dr. Sanborn, the scientist from way back who developed tons of weapons and biotechnology. He injects Nora with some seriously trippy drugs that ultimately break her. She reveals that Miles is in Atlanta, Neville has defected to Georgia, and Rachel is en route to the Tower. This piques Monroe’s curiosity and his confronts Randall, who admits he wasn’t up front about everything. Although Monroe is all for killing Randall, Randall convinces him that the Tower holds the key to some amazing technology that could give him a leg up even if the power is restored. It was a DOD skunk works, after all. Road trip! They’re off to Colorado via helicopter. Meanwhile, before he leaves, Monroe orders Nora killed by Dr. Sanborn. He injects her with something…

Cut to Georgia, where the citizens are evacuating. Jason tries to convince Charlie to leave for her own safety. She refuses, so naturally they make out until Jason spots a creepy dude peeping on them. Suddenly Dr. Sanborn appears in a car, Nora in the backseat in bad shape. In the hospital, she tells Miles that she cracked and told the Monroe Republic about their whereabouts. Dr. Sanborn desires to defect and promises to take the group to the Tower as proof of his loyalty. Jim, Charlie, Neville, and Jason will accompany them, alongside two red shirts and Nora, who wants to redeem herself.

Away in a field at the Tower, Aaron and Rachel observe as Monroe tries to get into the Tower, which is 1/2 mile below the Earth in a bunker. Randall’s access is denied into the Tower and we see that some people (I’ll call them ‘Others’ for simplicity) are inside. Rachel has the override code from Dr. Warren’s magic spell book and hatches a plan to kill Monroe, distracting the militia while Aaron goes into the Tower and reboots the world. He’s hesitant because he’s well aware her proposition is suicide.

The chopper meanwhile, needs to land to refuel at an old airbase in the Plains Nation. Jason flashes back to the creep who approached him in Georgia with “a job.” Upon landing, Dr. Sanborn is acting a bit shifty and Nora seems to be hallucinating due to the drugs she was given, though she insists she’s fine. Shortly after the fuel search begins, Charlie spies blood coming from a dumpster. They find the pilot dead, his throat slit, and attribute it to some unfriendly Plains Nation tribe who also disabled the chopper. 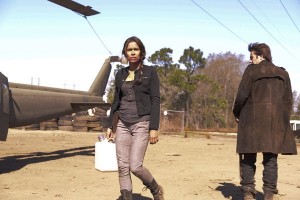 As Miles and Charlie search for the killer, they find out that the other red shirt they brought with them has also had his throat slit. Oh no! We’ve run out of expendable characters! The red shirt is still alive, though, and in a macabre game of charades, manages to convey to Miles that the killer was not some angry tribesman but one of their won. There’s a Judas among us… The question is, who? Jason? Dr. Sanborn? Jim? Neville? Nora? CHARLIE!?

Everyone is acting really suspicious as Miles brings his suspicions to the others. I suspect Miss Scarlet in the billiard room with the…never mind. Nora isn’t with the group though. He eventually finds her unconscious with a bloody knife in her hand, still drugged up. Dr. Sanborn suggests that it’s possible she killed the men while on her little acid trip and doesn’t remember. Nora seems to buy this theory. Miles doesn’t and vows to find the real killer. Jason, meanwhile, finds a knife in his pocket. Miles thinks that Jason is the killer. He claims that while he was approached by that creepy guy with a job to kill Miles, he refused. Jason tries to convince Charlie he’s innocent but considering she knew him as ‘Nate’ for the first half of the season it’s easy to see why she’s a bit hesitant. He feels betrayed and flees when Miles tries to kill him. Miles takes off after him with Neville and Charlie in hot pursuit trying to prevent him from harming Jason. 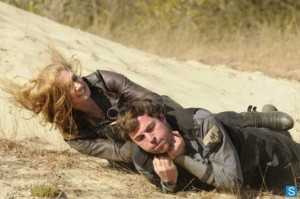 Rachel, meanwhile, assaults a militia soldier, strangles him to death, and steals his uniform to enact her plan.

Back with the main characters, Miles runs into a warehouse in search of Jason. Dr. Sanborn approaches him and alerts him that he has found a bloody knife indicating the Annapolis rebels, which implies that Jim is guilty. Jim drops down from nowhere in a flash and kills Sanborn before assaulting Miles. He reveals that the militia has his wife and will kill her unless he does what they order him to do. He expresses doubt that a war against Monroe is winnable and admits he gave the Republic the intel for the drone strike last episode. He then gets in a fight with Miles and tries to kill him. Jason comes in and shoots Jim to death in defense of Miles. Nora fixes the chopper and she reconciles with Miles. Charlie also tries to reconcile with Jason but he’s hurt that she didn’t believe him at first.

In the riveting final scene (and the only scene worth watching), Rachel struts confidently into Monroe’s tent, makes sure he sees her, and then pulls the pin on a grenade. Cut to credits. 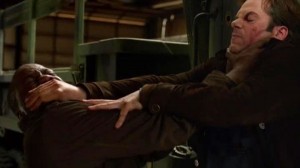 Wow. This episode was…tragic and not because people died. It was just a convenient way to tie up loose ends by scrubbing off some excess people–Sanborn and Jim, neither of whom were big characters or really characters with any point at all. They were basically playing the board game (or movie) Clue at an abandoned airforce base. So does that mean that Miles is Col. Mustard and Charlie is Miss Scarlet? Too bad Nick the priest died or he could have been Rev. Green! Okay, I’m done with bad Milton-Bradley references at this point. But seriously, there was truly no point to this episode! Our main characters didn’t make it to the Tower and the only part that grabbed my attention was when Rachel walked in with a hand grenade. Of course, we all know that she and Monroe aren’t going to die.

So what did you think of last week’s Revolution? Was it as dreary and pointless to you as it was to me? I’m so disappointed with the recent episodes of Revolution. It was never a stellar show but it’s only getting worse! We didn’t even get to find out who “The Others” are. I wonder if they worship big foot statues? Maybe Elizabeth Mitchell will play two parts in this show: as Rachel and as a doctor who is an “Other.” Sorry, but there’s too many Lost parallels NOT to comment on them. As for this week’s Revolution, well, you’ll have to come back tomorrow to read that! And don’t forget to watch Revolution every Monday at 10/9C! Until tomorrow!