Hey folks and welcome back to another Revolution review and recap. I know it’s been quite a while and I’m truly sorry. In my absence, Revolution was renewed for a second season, which means more of me (again, I’m truly sorry!) and more of Charlie and the gang! But I’m not here to bore you with details about that, I’m here to review and recap this week’s episode: The Longest Day, which I have decided to refer to as “the longest episode” because quite honestly it was slow, confusing, and at times dull to watch despite all the explosions and assorted bloody eye-candy.

The episode opens with a bunch of Monroe’s goonies siting behind a big screen playing what looks like Microsoft Flight Simulator. We’ll soon learn that this isn’t the case, though. Meanwhile, in Ashland, Kentucky, home of the rebel-Georgian alliance, Nora wakes up in bed beside Miles after their roll in the hay last week. She tells Miles it was a mistake to sleep with him. Ouch. She clarifies the statement by saying she’s worried that one of them will inevitably die. Clearly she’s analyzed the last few episodes and is aware that the writers have a propensity to randomly kill of characters, thus she is rightfully concerned about her own mortality. She doesn’t want to watch Miles die or have him watch her die. Therefore, it’s best to not get close. Also, attachments aren’t the Jedi way so…

Meanwhile, our own rebel-without-a-clue Jason is gearing up when his Georgia-aligned daddy Tom Neville approaches. Neville isn’t too pleased with his son abandoning him on that boat last episode and challenges his kid to kill him. For obvious reasons, Jason can’t, but Neville confirms he’s here to stay awhile so his son may as well get used to the idea. Charlie was watching all along and catches up with Jason to bond over their mutual parental issues.

Meanwhile, in the middle of a field somewhere in the vast, mid-western Plains 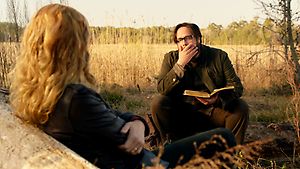 Nation, Rachel is nursing the leg she broke while on the run last week. Aaron is with her, poring over the journal that Dr. Warren gave them. He’s still concerned as to why his face and a newspaper clipping about him appeared in the book, as if he had a connection to the power that he himself isn’t aware of. Rachel suspects Ben knew something about Aaron that she didn’t and muses this aloud. She then tries to convince Aaron to leave her to die but he won’t have it. She informs him she may have a solution and the microchip full of nanites may be the key.

Meanwhile, in Georgia, a bunch of aerial drones drop bombs all over Ashland, blowing it nine ways to Sunday. Miles is knocked unconscious by the explosions and has a flashback to when Rachel first presented herself to him all those years ago after the blackout. It turns out they wanted Ben and she went in his stead. Before we find out anymore, Miles awakens to Nora’s panicked cries for help. She’s half-buried under rubble and he digs her out. Charlie, who had climbed up the guard tower to warn everyone of the drone attack, is 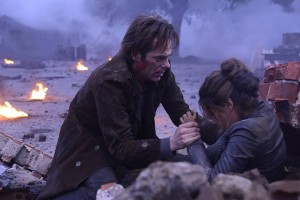 nowhere to be found. Uh-oh.

In Georgia, Miles suspects a mole tipped Monroe off about the location of the camp. Was it Neville, seeking redemption? Was it Jason who’s secretly some double agent like he was in the first half of the season? Who knows? Either way, there’s a Judas among us. Both Charlie and Jason are still missing  and a militia army is closing in. Nora and Miles head out to find Charlie and Jason. Neville joins them to search for his son. Meanwhile, beneath the rubble, Charlie is living out my worst nightmare–she’s buried alive! (Cue ominous music).

At an electronics store in the middle of nowhere, Aaron is assembling a device according to instructions in Dr. Warren’s book. It will help Rachel heal her leg. Either that or it will fry them completely. Fifty-fifty chance. I’m not kidding.

In the Monroe Republic, meanwhile, Monroe is informed by friend Jeremy that the drone strike was successful. He invites Monroe out for a drink, which he reluctantly accepts. He is nearly assassinated as he sets foot out the door. Only he (who rolled for cover) and Jeremy (who froze out in the open) survived. This is understandably suspicious. Monroe, thinking Jeremy tried to betray him like Miles did, has his only friend left executed. 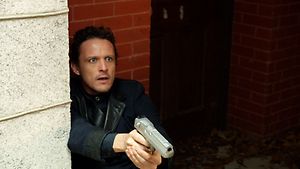 Back at the electronics store, Aaron powers up the microchip full of nanites and embeds it in Rachel’s leg. She writhes in agony a bit (props to Elizabeth Mitchell for making me wince in pain with her) but the wound ultimately heals in a disgusting manner, leaving just a scrape where the break was. A group of Plains Nation hunters observed this and, thinking the pair may be useful, promptly take them prisoner.

In Ashland, Monroe’s militia is on a death march. Miles and Nora spot a patrol dragging an unconscious figure and ambush them. The guy they were dragging is Jason, who is badly hurt. He informs them Charlie was trapped under the ruins of the guard tower and he tried to get her out before the militia ambushed him. Neville decides to get his son to safety while Miles and Nora go on in search of Charlie.

Another flashback reveals Miles and his cronies searching for Ben using Rachel’s directions. It is clear she intentionally misled them. She then denounces Miles as a cold-blooded killer. When he looms threateningly over her, she turns up her seductive charm. Failing to manipulate her brother-in-law with sex appeal, she turns to insulting him and tells him the brief fling they had when they were young was a huge mistake. That’s two times Miles’ lovers have been dissatisfied with his performance…

Rachel and Aaron are led to a home in the Plains Nation where a young teenaged boy is hurt after he fell off a horse. He seems to remind Rachel of Danny and she, in what seems to be motherly affection, agrees to help the family heal the boy with another microchip device. She needs more supplies, though, and the boy’s father goes with Rachel and Aaron to retrieve them from the electronics store.

Back at the rebel ruins, Miles and Nora engage the militia in a firefight. Once more, they pick off the militia like flies while none of the dozens of men seem capable of hitting two people ducking behind a burnt out cargo van. This is why Monroe isn’t ruler of the universe by now. In the middle of the firefight, Charlie manages to dig herself free of her debris prison, effectively voiding Miles and Nora’s efforts. Neville and Jason are also ambushed as they try to escape. Neville is shot in the shoulder protecting his son but manages to kill off their assailants.

At the electronics store, Rachel conks the boy’s dad over the head to facilitate hers and Aaron’s escape. Aaron is shocked as he genuinely wants to help the ailing boy. Rachel contends they are too late to help him. Aaron wants to try and questions what good turning the power back on is if they can’t help others. Rachel curtly replies, “What makes you think I’m in this to help people?” Aaron is visibly shocked as Rachel proves her own selfish agenda once again. This is why she’s my favorite character: she’s the ultimate dragon mother. Unassuming on the outside, ruthless and slightly evil on the inside. This is all about revenge for her. She wants the power so Monroe’s enemies will kill him and thus avenge her own son.

In the midst of the firefight in Kentucky, Miles decides he’s going to head off in search of Charlie, unaware of her escape. Nora tries to talk him out of it, certain he’ll be killed. He refuses and she decides she’s going to be with him to the end, darting off on her own to draw the militia’s fire and give Miles a chance to recover his niece. After Nora runs off, he spots Charlie also dashing away from the scene and gives chase.

Another flashback reveals Miles interrogating Rachel. In the interrogation, he essentially denounces all familial ties, showing how truly corrupt he was (as if we didn’t already know). In the present, the fleeing Charlie is nearly killed by a militia but Miles slaughters him with excessive force in a flurry of over-protectiveness. With Charlie safe, they go in search of Nora but she’s nowhere to be found.

We then skip to an unspecified number of days later, in Atlanta. Jason is in bed recovering from his wounds. He wakes up to find Charlie beside his bed. They share some conversation that quickly devolves into a makeout session in the hospital while Tom Neville looks on in displeasure. Miles is still desperately seeking Nora but with so few scouts the search seems futile. To make matters worse, the president of the Georgia Republic is considering surrender. She’s aware of the imbalance of power and wants to spare her people, particularly civilians, from slaughter. With her hands tied, she informs Miles that unless he has any brighter ideas, she will be forced to evacuate Georgia and surrender to Monroe. In a final scene, we see Nora getting hauled into a prison. She looks up and finds herself at the feet of none other than Sebastian Monroe, the madman, himself. End.

Okay so this episode was all over the place, as most Revolution episodes have been of late. To be honest, this show seems to be getting progressively worse and the writers keep trying to gain our interest with big explosions and anti-climactic fight scenes in which only red shirts get hurt. When that doesn’t work, they put a major character (like Nora) in peril. It’s a formula that’s getting old and this episode struggled to find its identity. There were several immediate problems, such as the drone strike, finding Charlie, etc. mixed in with the more interesting arc following Rachel and Aaron. I’d really like an episode with just them. Actually, just Rachel. She could fill an hour time slot with her twisted antics all on her own.

I normally have mixed feelings about Revolution episodes but this was, by far, one of the worst I’ve seen. I think I just disliked it. There were very little redeeming qualities about ‘The Longest Day’ and I found myself wishing it would just end. Anyway, sorry to be so blunt. On second thought, no I’m not. Hopefully next week’s episode will sort itself out better and provide a less dreary entertainment experience. What did you think of this week’s episode? Agree with me? Disagree? Why? What’s going to happen to Nora now? And how many of you (show of hands) think Rachel is pretty much the biggest badass on television right now? Leave a comment in the comment section below because we love to hear your thoughts! And don’t forget to tune into Revolution every Monday at 10/9 C on NBC! Til next week, my friends!