My eyes are wide open and I think I had to pick my jaw up off the floor during the beginning of the show.  Do you all remember Tommy?  I do.  I mean Season 1 is my favorite season of this show and as he was held for food by the Wendigo I was at the edge of my seat hoping that the Winchester would rescue him.  Anyway he and his girlfriend are out in the woods.  He hears growling and his gal does not.  Convinced that a Wendigo is outside he tries to get her to hide and he arms himself with a flame thrower, but it isn’t a Wendigo outside as the growls turn into a high-pitched noise and soon his eyes and ears start to bleed leading into his head exploding. 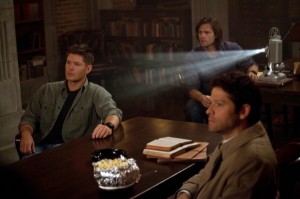 Dean isn’t happy that Cass is back.  Still upset that Cass ran off and didn’t trust him he gives the angel the cold shoulder.  Research on how to cure a demon leads the boys to a case, the Men of Letters had, where a Father Thomas was convinced that he could cure a demon.  Watching the first attempt the boys are intrigued by the unorthodox exorcism.  Father Thomas is dead so they follow-up with the 2nd priest that had been there that night, who gives them all of Father Thomas’s things.

While out getting provisions, such as pie to suck up to Dean, Cass runs into Metatron AKA Marv, who tells Cass that the two of them need to team up and save Heaven.  Cass meets him at a crepe diner and Marv explains his plan.  As he is the one who wrote down all the trials he proposes they team up , Marv as the brain and Cass as the brawn, and shut the gates of Heaven.  Doing this will contain the angles from spilling their fight onto earth and give them a much-needed time out.  Cass decides that since he made the mess in Heaven he should be the one to fix it, but when Marv tells him that the first trial is to rip out the heart of the world’s only Nephilim, their waitress, he hesitates. 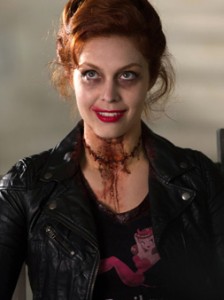 After hearing that Father Thompson’s last attempt seemed to have been a success the boys decided to give his new exorcism a trail run and they pull out Abaddon’s pieces and reassembles her, well most of her.  They keep her hands in the box.  She tells them that she was the one who tore Father Thomas apart and that his crazy plan wouldn’t work.  However before they can try it out Crowley calls them and we find out that he was the one who killed Tommy and he would text them an address.  They go back into the holding room and find that Abaddon has escaped.  They get that text from Crowley and knowing that it is a trap, but the best way for them to get their hands on another demon, they head out.  Arriving at the address they find Jenny, a gal they saved from being in the middle of a witch battle, dead.  Crowley calls again and says he will keep killing their saved people until they give him the demon tablet and provides them with another address.

Cass and Marv stake out the Nephilim with Cass finally deciding he has to go through with it.  She confronts them telling the guys she knows who they are and that she just wants to live her life and that she tries to be good.  Cass tells her that he knows she does, but when he doesn’t back down she attacks.  After a good fight Cass impales the Nephilim though the throat with an angel sword.

Arriving at the new address Sam and Dean come face to face with Sarah, a girl Sam had feeling for when they fought a ghost who possessed a painting that had been in her father’s gallery.  She is stunned to see the boys, but knows that something awful is coming and when they tell her Crowley’s plan she lets them set up shop.  We find out that Sarah is married and has a one year old daughter named Bess.  (Darn it I always wished that when the boys could have real love in their lives that Sam would find her again).  She tells Sam that he has changed and that he seems more confident and knows what he wants.  Right before midnight Crowley calls again and when the clock strikes that magic witching hour Sarah falls to the floor choking.  Crowley informs the boys that his mother was a witch and he has some tricks up his sleeves.  The boys tear the room apart but can’t find the hex bag and Sarah dies.  Once she is gone Crowley explains he will keep doing this to all the people the boys have saved, he is using the Supernatural books to find them, until the boys surrender and give up on closing the gates of hell.

Getting back to the bunker Sam seems a bit defeated and confesses that he doesn’t think they can win this battle.  Dean has confidence that they can and the show ends with Dean asking Sam if he is with him.

Wow this was a great episode.  I loved seeing some familiar faces, but not that they died.  I am thoroughly enjoying how Supernatural is tying everything up and I am so excited to see the finale next week, but at the same time it is the finale.

Until next week my wayward family: