Since it is the season finale tonight I am not going to give you a blow-by-blow recap.  I feel everyone should have the opportunity to just watch and enjoy this special finale.  So I am going to just briefly talk about some of the highlights tonight.

As the season finale begins we get our traditional Carry on My Wayward Son song and it makes me grin from ear to ear.  Flashes of the season remind us of all the great events that happened this season. From Dean escaping Purgatory, Sam living with a woman, Benny, Castiel’s betrayal and of course the whole angel and demon tablets our emotions are brought forward regarding this season.

First let’s talk about the “deal”.  I really thought the boys had thrown in the white flag when they agreed to give Crowley the Demon tablet and give up on the trials.  It was such a 180 on how last weeks episode left us, but in true nature the boys were bluffing and Crowley became the demon they intended to cure.  I really think Sam came close too.  Crowley was talking nonsense….well nonsense for Crowley anyway.  I was impressed with how easily Abbadon was distracted and the way Sam took her out. 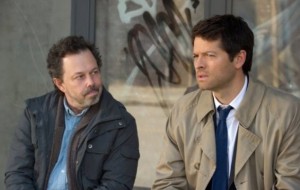 We learned that the next in the angel trials was to cut out a cupids bow, but when Metatron is taken by Naomi and her gang Cass recruits Dean to help him.  I was a bit confused at how easily Sam was able to talk Dean into going, but away he went.   They were able to convince the cupid to give them her bow but then Naomi showed up, after digging around in Metatron’s head and learning he was lying about the angel trials, begging them to stop and telling Dean that if Sam finished the demon trials he would die.  That was God’s ultimate plan, the greatest sacrifice to close the gates of hell.  Dean gets Cass to take him back to Sam and when he is dropped off Cass leaves expressing that he isn’t wrong and he is going to save his home (Heaven). 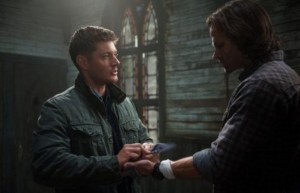 Dean stops Sam right before he finishes the exorcism and they have the most heart wrenching exchange they have over the past eight years.  I want to so badly go into detail about this, but for those that may not have watched yet they deserve to experience it themselves.  It had me in tears and it was the best brotherly interaction I have seen from them and they have had some amazing moments over the past eight seasons.

I never once guessed that Metatron was lying to Cass and that he was planning on casting the angles out of Heaven and not shutting them all inside.  I was right beside Cass and I gobbled up every word he fed us.  I was shocked to learn that what he was having Cass do weren’t trials but a spell to cast his brothers and sisters out of their home as they had run him out after God left.

The show ended with a shock as Sam was raked over with pain and the angels began to fall out of Heaven.

I have to say that I am sad the show is over for the season, but wow what a way to leave us.  The emotions it left in us will carry on throughout the summer.  The twist and turns and of course the pure brotherly love we all latch onto this show for.  I am certainly looking forward to Season 9.  I hope you all are as well.

Well my Wayward family have a great Summer and I hope we can take this journey again next season.  Make sure you keep checking the TiBS website for great stuff about summer shows, most importantly the show that got this website started, Falling Skies.