Falling Skies: I Spy Dai! – Reasons This Is More Than A Conspiracy 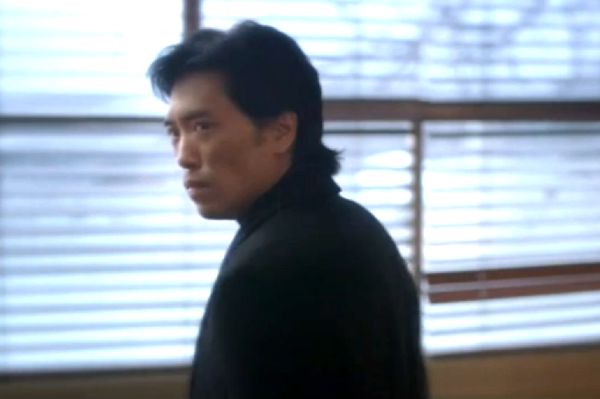 Falling Skies does a lot of things very well, and one of the things it does best is create characters fans really love…then kill them off.

I hate them for that.  Lots.  Like a kid hates brussels sprouts lots.

In every instance, save for one, the unfortunate have been considered supporting characters.  Dai is that exception, much to the chagrin, and often rage, of crazed fans like me.  Look, I really hated to see Jimmy bite the dust and I threw a warm beer at my TV when Crazy Lee lost her battle with the rebar-o-death.  But Dai’s death really hit me in the danglies because he was one of the core characters and a real fan favorite.

Had I not already been restrained by medical professionals for completely unrelated reasons I would have put my foot through the TV when Dai was killed.

If this were Star Trek he’d have been a regular part of the bridge crew.  I bet if Roddenberry were alive he wouldn’t put Peter Shinkoda in a red shirt, either.  Yeah, and IF Roddenberry had the chutzpah to kill him off it would’ve been in some heroic way while saving everyone else.  What Dai got was the Falling Skies equivalent of taking a wrong turn at Albuquerque, walking into a wall, and mysteriously forgetting how to live.

Okay, I’m working myself up all over again.  If you want to read my foaming-at-the-mouth rant concerning this you need only read “Falling Skies Conspiracy Theory – Dai’s Just Mostly Dead” to get the unabridged version of how I feel.

The reason I’m hacking away frantically this time is to cover a few possible reasons we briefly saw Dai in the post premiere promo.  Since Falling Skies is a science fiction show and I have all the prognostication prowess of a lobotomized tree sloth this is hardly a comprehensive list, but it’s a few things I think are plausible.

Anthony Reminiscing About His Friend 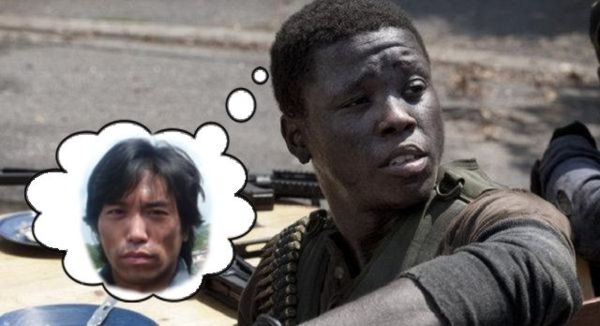 “Baby-sitting Pope ain’t half as fun as playing ‘Wedgie Wars’ with Dai. I really miss that dude.”

The 2nd Mass has been fighting non-stop since Dai’s death and we really haven’t seen Anthony take the time to stop and remember his fighting pal.  I’ve called these two “The Blues Brothers of the 2nd Mass” and when someone’s lost a brother they need time to grieve.

Maybe this is a little service to fans who felt Dai’s death was handled clumsily and dismissed, but it would be far too little.  Still, it would be something.  Not enough, but something.

The Funeral Tribute Dai Never Got, But Really Deserved 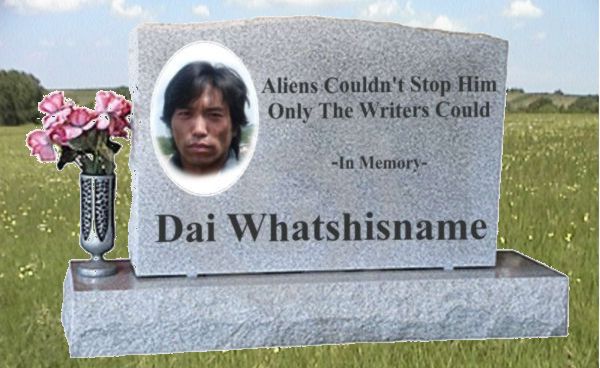 This is what we’ve been bitching about since last damned summer, people!  Jimmy got a funeral, complete with dirt and everything.  Like Rodney Dangerfield, Dai’s getting no respect.  Maybe he’s showing up in a montage during a long overdue memorial service.

I have my doubts about this since, as we were reminded 684 times during the premiere, it’s been SEVEN DAMNED MONTHS.  Talk about too little, too late. 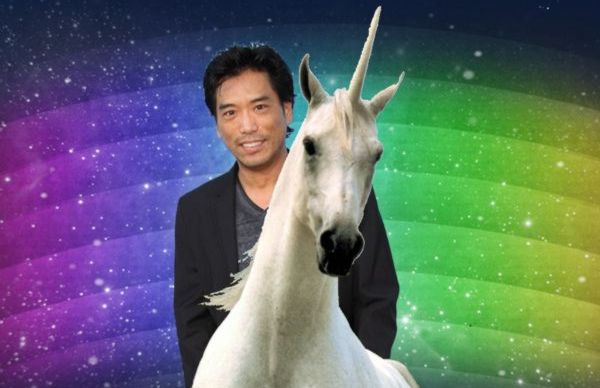 Dai and Charlie: Together at last.

This wouldn’t be much more satisfying than a memorial montage, but it could be trippier.  It would explain why Dai’s wearing different clothing in that picture from the preview.  Now that I think about it, the jacket he’s got on in that picture looks remarkably similar to his unicorn riding jacket.

A Flashback A La LOST 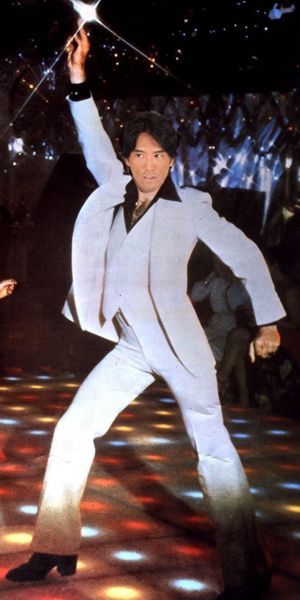 Flashbacks on Falling Skies aren’t unprecedented and with the inclusion of Terry O’Quinn they’re almost a requirement.  Since I’m assuming none of the regulars on the show knew Dai before the invasion maybe the group came across someone who knew him from the past.

This could be heartwarming and provide fans a sense of closure by having this person tell about the kind of man Dai was in his years before the fighting started.  Maybe they could paint a picture of someone who was as honorable throughout his life as the man we came to know as the most reliable fighter of the 2nd Mass.

This would help smooth out our ruffled fan feathers and if done right could be a good way to close out the story of a character whose story we desperately want to see continue.

Sorry, but it still wouldn’t be enough.  It’d be really nice wrapping on the present, but there’d still be the DeathTurd in the box when we opened it. 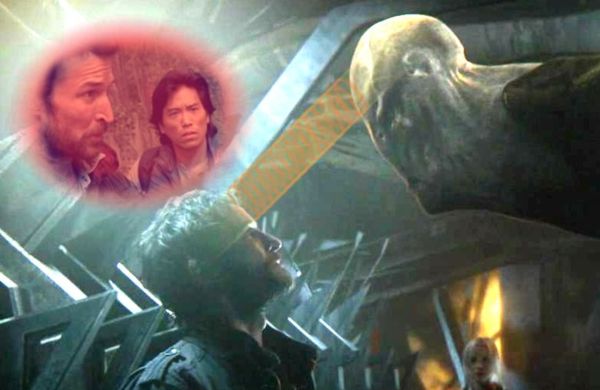 With every member of the Mason family, except for Matt, affected by alien technology it’s very plausible that one of them could be made to believe anything the Espheni wanted.  Since Tom’s the leader of the 2nd Mass and one of the growing number of Presidents of the Obliterated States of America, he’d be a prime target to manipulate.

At one point in the preview, Tom says, “Something’s going on.  This isn’t my life.” which would indicate he’s experiencing something not quite real.  It’s a common trope to have our heroes eventually become aware of being in the Matrix then kicking holographic ass until they get the hell out.

Being a history professor, Tom is good at remembering stuff that really happened, so it should be easy for him to call bullshit on some made-up Espheni holodeck adventure. 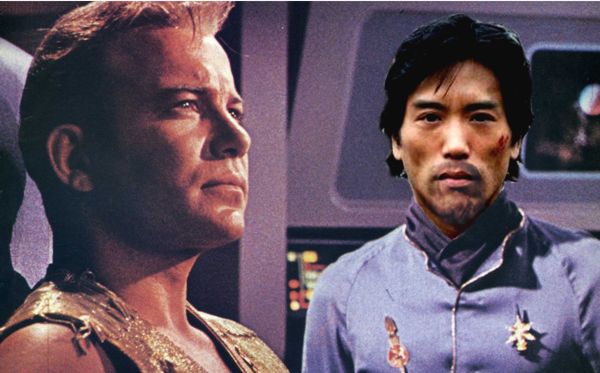 Remember that giant, underground BFG 9-Gazillion the resistance is building for the Volm?  Maybe it’s not a gun after all, but a device that opens a portal between universes or that alters reality itself.  Instead of fighting the Espheni the Volm may have figured out a way to stop them from ever becoming a threat in the first place.

Cochise mentions they’ve been fighting for hundreds of years, so they had to have lost a lot in all that time.  If they could devise a way to alter the past so the Espheni never progress, or even exist at all, everyone’s reality would revert to a completely different timeline where the invasion never happened.

Better than surviving an attack, Dai would never have died, or gotten mostly dead, at all, Tom would find a razor for his face, and Rosemary’s baby would never be born just to screw with Anne.

This could work, but only if it were the end of the series.  Even then, hitting a giant reset button would be a huge cop-out.  Besides, Tom probably wouldn’t be doubting the reality of his life if time were rewritten. 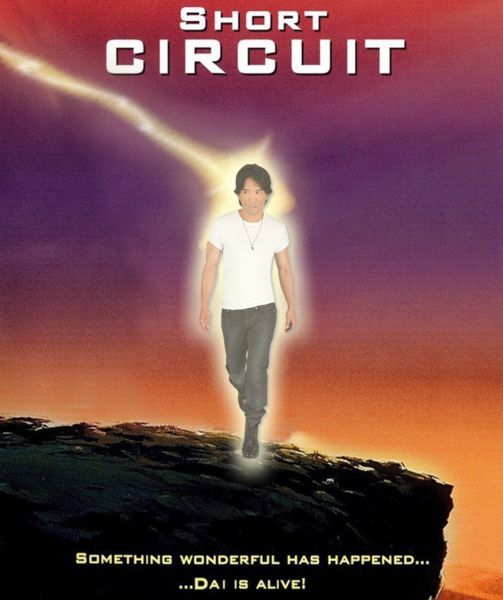 In this possibility I find myself vindicated after months of looking like a crazed fool for insisting Dai ain’t staying dead.  Ever since the season 2 finale I’ve been beating that dead horse so thoroughly that I now have a lifetime supply of dead horse smoothies.  They have a really bitter taste, but they’re high in protein and denial.

The scenes with Tom questioning the reality he’s in and the quick shot of Dai could be completely unrelated.  Those clips could’ve been cut to make us believe Tom’s living some kind of hallucination and seeing Dai, but that might just be misdirection.

Maybe Tom’s being controlled by the effects of the Espheni eye worm and whatever is doing the controlling needs to be blown the hell up to free Tom from its grip.  Maybe everyone has tried their best, but just can’t quite hit the mark.  Maybe the Volm use their advanced technology to revive the one fighter who never freaking misses: Dai.

It damned well better be more than “maybe” because I can’t afford to pay for a replacement TV after I’ve taken a chainsaw to the one I have now and pay for the divorce proceedings when my wife kicks me out for having a meltdown over a TV show.

So unless the producers of Falling Skies want to be responsible for destroying a marriage, a perfectly good TV, and turning me into a homeless alcoholic whose children are forced to live in shame they’ll do the right thing and bring Dai back.

Nobody’s that cruel, are they?