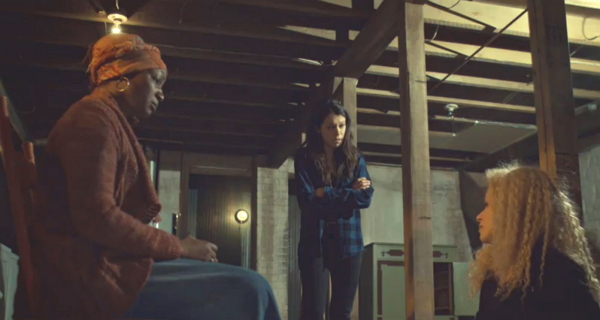 Last week Kira seemed to show both incredible resistance to injury and remarkable healing abilities after being bounced off a car in a way that should have killed her.  This week, while Sarah’s in the basement of Mrs. S’ house with Helena and their birth mother Amelia, Kira tells Mrs. S she thinks something bad is going to happen.  Just a few minutes later the police barge in and arrest Sarah.  She may have also been referring to something Helena’s does a little later, but we’ll touch on that in just a bit.

Either way, it’s looking more and more like Kira may be the most interesting part of the clone equation and possibly even the goal of the project itself.

Dr. Leekie’s going around offering the clones contracts that would stop the monitoring in exchange for them going in for voluntary tests.  In addition to that, Cosima gets a job offer to work at the Dyad Institute studying the clones’ DNA, including her own.  On the surface, they sound like good deals, but we know there’s going to be a catch.

Sarah’s in an interrogation room with Art and she’s just about to tell him the whole, true story when a man purporting to be her lawyer enters and takes her to meet the mysterious woman in charge.  You remember the woman who’s face we didn’t get to see last week, right?

No big surprise when that mystery woman, Rachael Duncan, looks exactly like the clones.  She admits they know about Kira and wants Sarah to also sign an agreement telling her it would protect Kira, but that’s nothing more than a thinly-veiled threat. 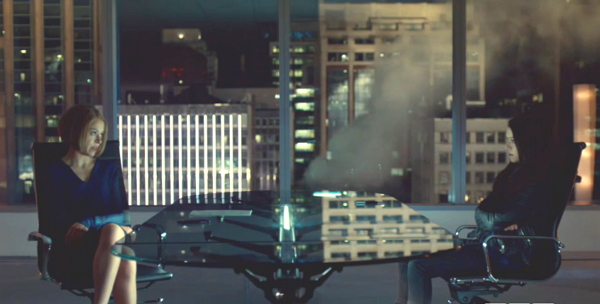 Alison, after being told that if she takes the deal her monitor will be lifted, notices Aynesley has sold her house and is moving.  Alison goes over to try and get Aynesley to admit to being the monitor, but that never happens.  What does happen, through a series of unfortunate hissy-fit-fueled events, is Aynesley gets her scarf caught in the running garbage disposal.  Alison doesn’t bother to turn it off and Aynesley chokes to death.

Well, well, well…the clones have a way of turning their monitors, don’t they?  Delphine meets up with Cosima at Felix’s loft and says she’s siding with her instead of Leekie.  To prove her loyalty, she helps Cosima figure out the hidden ID tags in the clones’ DNA sequences.  Delphine knows Cosima’s tag number so they use it as a basis to translate the rest.

Remember the basement reunion of mother and twins?  That’s when Amelia told Sarah she needed to meet with her privately to give her some information about her pregnancy.  Amelia meets her at Beth’s apartment and says Mrs. S isn’t who she says she is and that she’s got something Sarah needs to see.  The problem here is Helena overheard the plans for a private meeting and got there first.  She put on a wig to fool Amelia and stabbed her before Sarah showed up.

Helena blames Amelia for the way she turned out because she gave her away to the church.  While Amelia couldn’t have known what kind of twisted upbringing the baby would endure, in a way as twisted as she is Helena is right.  Not that Amelia deserved to die, but from Helena’s point of view it’s deserved.

When Sarah shows up at the apartment all she finds are a wig and plenty of blood stains, then Helena calls and tells her to meet them.  At an abandoned warehouse.  In the dark.  Naturally.

Sarah finds Amelia bloody and dying on the floor.  Just before she dies, the woman hands Sarah a photograph of a man and a woman wearing lab coats.  On the back is printed, “Project LEDA.  July 22, 1977.”  There are also the names of two professors, but the names have been blacked out with a marker.  Early in the episode Mrs. S took a peek at the same photograph before putting it back in Amelia’s bag.  I wonder if she was the one to black out the names? 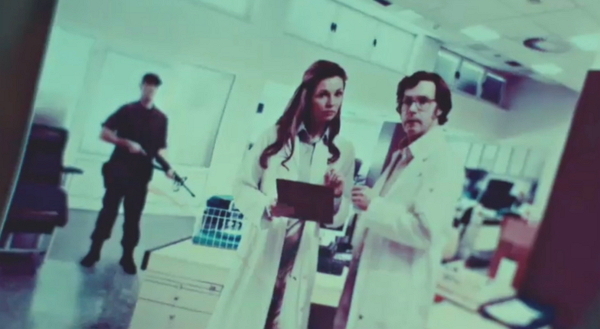 Is this a picture of the scientists who perfected the human cloning that led to Sarah and countless others?  More importantly, could these two be the main contributors for the genetic makeup of the clones?  They may be the closest thing to biological parents Sarah and the others have.

About that time, Helena appears and proceeds to kick the clonesnot out of Sarah.  Helena tells her that because they’re twins she can’t kill her, but Sarah doesn’t have those same qualms.  She pulls out a pistol and ends Helena once and for all, then she calls Rachael and says she’s coming in, assumedly to take the deal.

I’m sad.  Helena was crazy, unpredictable, and dangerous, but she was entertaining as all hell.  From a perspective of pure on-screen entertainment, she was my second favorite clone after Alison.

And this is where things begin to come to a close for the season, but at the same time new revelations arise that open up season two for even more insanity.

Back at her only-perfect-on-the-surface suburban home Alison is freaking out over what she’s done when Donnie comes in and consoles her.  She signs the deal and faxes it to Rachael, then makes kissy face with Donnie who’s about to go for a run.  She’s feeling so much better now that her life is getting back to normal.  Donnie only gets a couple of blocks down the street when he stops and gets into a car with Dr. Leekie. 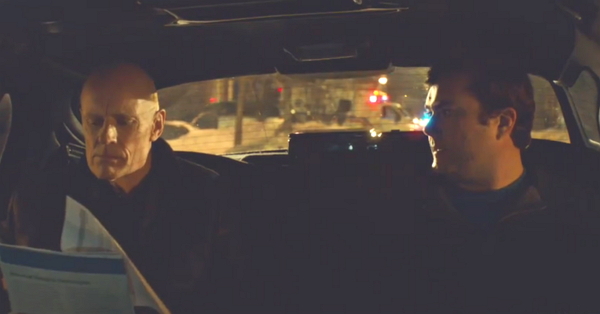 Sarah arrives at the building of the Big Bad Bitch and is met in the elevator by Paul who finally tells her what the Dyad Institute has on him.  He was a private contractor in Afghanistan and he killed six Marines in a friendly fire incident.  He tells Sarah that since she was born outside the company’s control they don’t really have anything on her.  Paul again proves he’s on Sarah’s side and goes even further by telling her the nature of the strings by which he’s attached to Dyad.

Still in the elevator with Paul, Sarah gets a call from Cosima who’s decoded the rest of the DNA ID tags.  The tags are a patent, making them and their DNA property of the company, including Kira.  The elevator doors open at Rachael’s office to reveal an empty car.  At the same time she gets an email from Sarah that says, “UP YOURS, PROCLONE.”

Rachael makes a call to someone, but we aren’t shown who is on the receiving end.  All she says is, “You know what to do.” 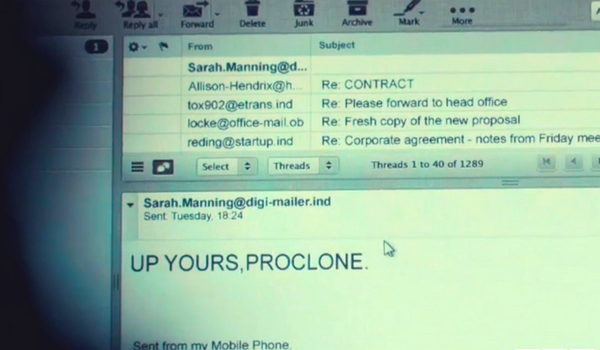 At Felix’s apartment Cosima reads out loud the “patent statement” found in the genetic ID tag.  “This organism and derivative genetic material is restricted intellectual property.”  Cosima tells Delphine that she’s sick.  She’s been coughing up blood just like Katja was.

Having escaped the Tower of Terror, Sarah walks into Mrs. S’ house to find it not only unoccupied, but thoroughly ransacked.  I suppose Rachael’s phone call saying, “You know what to do,” meant take Sarah’s family.  The episode ends with Sarah looking out of Kira’s open bedroom window and screaming the little girl’s name.

Oh, Orphan Black, why do you torment us in so many entertaining ways?  At least you’ll be back, I’m thankful for that.

As a season ender, this episode was at once very satisfying and very frustrating.  We got lots of answers, like who the mysterious bitch in charge was, that Dr. Leekie isn’t a good guy (Not that we ever thought he was.), that Paul and Delphine have come over to the Clone Side, and that “Eating, farting Donnie,” is the bestest monitor evar!

There are countless questions left, but I have a few that are foremost in my thoughts at the moment.

I adore Orphan Black, but I have a couple of minor problems with it.

First, like many cable series, seasons being only 10 episodes long make the wait between those seasons seem like an eternity.  I’m not asking for 20-plus installments, but how about considering a 13-16 episode season?  I really needs my OB!  Granted, I’ll take 10 over none any day, so that’s a minor concern.

My second quibble is one that I find really detracts from the quality of the show.  I’m talking about the incidental music.  I’m sorry but it’s horrid.  Before you get the wrong idea, I’m not referring to the title sequence.  I think it’s trippy and pretty damned great.  It’s the rest of the music that jolts me out of the story with it’s awfulness.

I suppose it’s a testament to the writing and acting that a show with such a grating and distracting musical track can still remain so entertaining.  I can’t think of a single episode where the music didn’t make me stop and wonder if the producers just hired some random street DJ to mix together jumbled sounds they then tried to pass off as a score.  The best thing they could do for season 2 and beyond is to get someone else to do the music.  Please.

Felix:  You know, Angela Deangeles, I’m actually quite a fan, but you really need to get laid.
Angela:  Yeah, tell me about it, but all I seem to meet are gay men.

Sarah:  So is this the part where twenty more of you robot bitches walk in for effect?

Felix:  She’s a proclone?  God, you three are weird enough.

Kira:  When the police come, Mommy goes away.

Helena:  You gave me to them.  You let them make me this way.

Donnie:  Honey, I let those people in our home.  They had no right to intervention you like that.

Sadly, Orphan Black has ended for the season.  Happily, it’s been picked up for a second season.  Keep checking back for news on the progress of season 2.