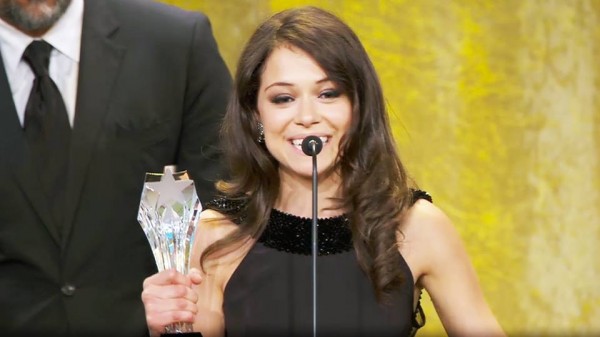 From the very first episode she’s been almost universally praised for her multi-character role on Orphan Black and now star Tatiana Maslany has received an award for her hard work.  At the Critics’ Choice Awards, Maslany won the award for Best Actress in a Drama, beating out the likes of Claire Danes (Homeland), Vera Farmiga (Bates Motel), Keri Russell (The Americans), Julianna Margulies (The Good Wife), and Elisabeth Moss (Mad Men).

She was definitely in good company, but she deserved the win.  I’m not trying to downplay the hard work or talent of these other actors, but Maslany plays several parts on her show and does it very well.

You can tell from the video of her acceptance speech that Maslany was sincerely grateful for the recognition and truly surprised.  She even mentions at one point how nervous she is.  Her humble acceptance speech was spent thanking other people on the show and doing her best to not leave anyone out.

I really love it when an actor is recognized for their hard work and their appreciation is so obviously sincere.

From the BBC America Press Release:

“Tatiana Maslany is truly television’s brightest new star,” commented Perry Simon, General Manager, BBC AMERICA.  “Her tour de force performance on Orphan Black is richly deserving of this honor and we are thrilled that the TV critics have recognized her exceptional talent.”

If you didn’t watch Orphan Black when it originally aired, it’s not too late to catch up.  According to BBC America free episodes of Orphan Black are available now on Video on Demand and can be purchased on iTunes,Amazon, Google Play, Xbox Live, VUDU and Sony PSN.

Also Orphan Black: Season One arrives on Blu-ray and DVD on July 16.

Orphan Black returns for a second season in 2014!