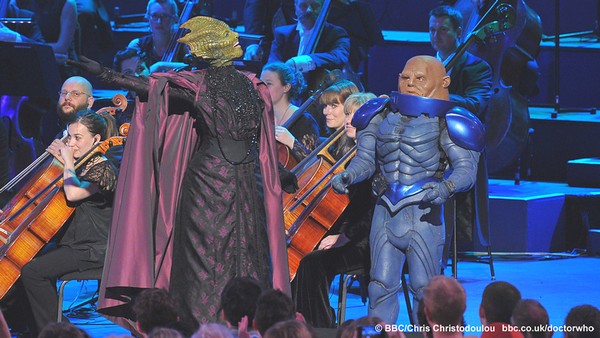 In the United States when we hear the word “prom” or “proms” we think of high schoolers dressing up for a fancy dance.  In the UK the word “proms” more commonly refers to a series of live concerts performed mainly at the Royal Albert Hall.  More precisely, “The Proms” is short for The Henry Wood Promenade Concerts presented by the BBC.  There are several performances spanning a number of months, often as many as 100 in a single season.

Why should you care, you might ask?  Well, it’s great live music, for one.  But in the context of this post it’s because some of the performances are centered around Doctor Who.  Unfortunately, you can’t watch the entire thing online, but the BBC have been kind enough to provide a few clips of some iconic tunes.  There’s also one clip that includes Matt Smith, in character, having to be guided off stage by Jenna-Louise Coleman, also in character.

Take note of the baton because for The Doctor Who Proms an ordinary baton just won’t do.  For this night they’ve enlisted the aid of a sonic baton.  Would you expect anything less?

In the first of 4 clips the Doctor appears at the conductor’s podium and proves, however briefly, that he can play the piano.  Apparently oblivious to the fact that they’re holding up the proceedings, the Doctor has to be guided off stage by Clara so the orchestra can get down to the business of performing.

Now that the introduction of our lead characters is out of the way, the proper way to start a musical celebration of Doctor Who is with a live performance of the theme song.  The theme is performed by the BBC National Orchestra of Wales and the London Philharmonic Choir, conducted by Ben Foster.  In and around the audience are various past and present friends and foes of the Doctor for added atmosphere.

One of my favorite songs by the talented Murray Gold has to be I am the Doctor.  It’s come to embody the show every bit as much as the title theme has, which says a lot about Mr. Gold’s talent.  The song is accompanied by the Doctor’s boastful, yet still pretty damned great, monologue from The Pandorica Opens.

And of course we couldn’t have this modern incarnation of Doctor Who without the legacy of the “classic” series that started it all nearly 50 years ago.  The final clip pays homage to the original run with a medley of music and sound effects recreated with the same synthesizers and electronics effects machines used years ago.  It features the classic sound of the Tardis and Sound Effects by Brian Hodgson (BBC Radiophonic Workshop) with synthesizers and electronic effects played by Mark Ayres and Peter Howell.

About The Doctor Who Proms 2013 from the BBC’s website:

There was an epic sense of celebration at this weekend’s Doctor Who Proms. The Royal Albert Hall’s audience – many of them dressed in fezzes or bow ties – were there to hear the brilliant work of Murray Gold and music from throughout the show’s history, provided by the London Philharmonic Choir and the BBC National Orchestra of Wales, conducted by Ben Foster.

Matt Smith and Jenna Coleman hosted the evening, along with a host of familiar faces. Madame Vastra and Strax (Neve McIntosh and Dan Starkey) took a break from Victorian England to appear and there was a fantastic reception for Peter Davison and Carole Ann Ford who played the Fifth Doctor and the Time Lord’s granddaughter, Susan, in Doctor Who’s early years.

Musical highlights included several Murray Gold favourites such as The Man Mad with a Box, I Am The Doctor and All the Strange, Strange Creatures. The two winning entries in the Doctor Who ‘Create a Soundtrack’ competition were given their first live performances and there was a ‘Classic’ Doctor Who Medley featuring scores taken from The Tomb of the Cybermen, The Sea Devils and many more stories from 1960s, 70s and 80s.

Perhaps most excitingly, Saturday’s Doctor Who Prom featured the world premiere of Murray Gold’s Song for Fifty which celebrates half a century of adventures in time and space. Written and orchestrated by Murray Gold, its lyrics ended with the fitting sentiment, ‘Happy birthday. Doctor. You.’

Unfortunately, the long anticipated Song for Fifty isn’t currently available to hear online, but if you click on the name you’ll be taken to a BBC article that has the lyrics.

Doctor Who will return on November 23rd with Matt Smith making his second-to-last outing as the world’s oldest, brightest, and most fun kid in all the universe.

Various and sundry linkages for your browsing pleasure: