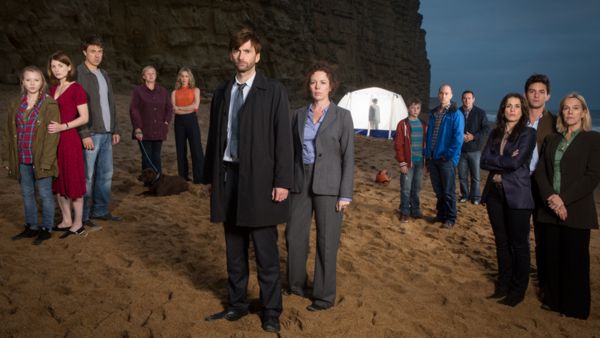 Fans of Doctor Who know they’ll get another glimpse of David Tennant on November 23 in the big 50th anniversary special, but you’ll get to see plenty of “Number Ten” very soon on BBC America.  The hit Brit drama Broadchurch will be landing stateside beginning Wednesday, August 7 at 10/9c for an 8 episode run that will have a conclusion.

You won’t have to worry about investing your time in a series that might leave you hanging with an unresolved story here, folks.

There are more ties to Doctor Who than just the appearance of David Tennant.  Alongside him will be Arthur Darvill, who played the recently departed Rory Williams.  Joining them is David Bradley, who not only played Solomon in the episode Dinosaurs on a Spaceship, but will also be portraying William Hartnell, the actor who played the very first Doctor, in the drama An Adventure in Space and Time that should air late in 2013.

The series was written and executive produced by Chris Chibnall who has written several episodes of Doctor Who, including the aforementioned Dinosaurs on a Spaceship.  Chibnall was also the head writer and co-producer of Torchwood, a spin-off of Doctor Who.

To top it all off the directors are James Strong and Euros Lyn.  Between the two of them they have directed no less than 15 episodes of Doctor Who and 7 episodes of Torchwood.  Lyn was the director for the two-part episode The End of Time which were the last episodes for Tennant as the Doctor.

Even with all that Who-cred, there will, however, be no time-traveling or aliens in Broadchurch.

BBC AMERICA’s Broadchurch, which earned critical acclaim, record ratings and became a Twitter phenomenon in the UK, centers on the investigation into the murder of a young boy in a British seaside town.

Leading the investigation are two detectives – the strong yet compassionate local Detective Sergeant, Ellie Miller (Olivia Colman), and the by-the-book Detective Inspector Alec Hardy (David Tennant), Ellie’s newly appointed boss.  By circumstance they are partnered to solve the murder, keeping the newspapers from derailing the investigation and trying to prevent the crime from impacting tourism at the beach where the boy was murdered.

The cast also includes Jodie Whittaker as Beth, Andrew Buchan as Mark, Will Mellor playing Stephen Turner and sees Arthur Darvill as the town priest Paul Coates.  The series is created and written by Chris Chibnall and executive produced by Chibnall and Jane Featherstone.