Doctor Who Fans Get Video “Thank You” From Matt Smith 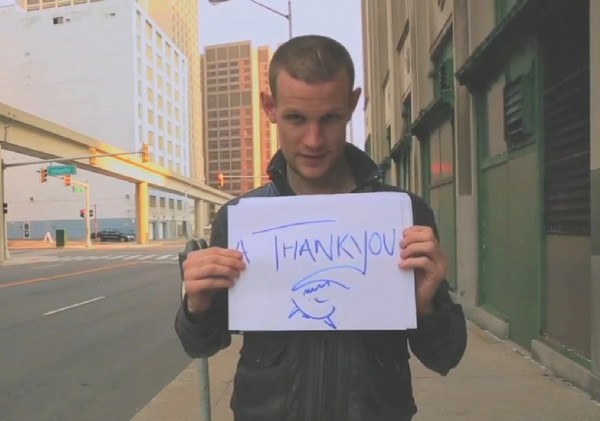 He’s leaving, we have to accept that.  We all knew this was coming, but there were hints, actually more than hints, that Matt Smith would stay on for one more series before parting ways with the TARDIS.  Sadly, that’s not going to happen and there’s nothing we can do about it except to accept the sad news with dignity.

Instead of taking this bad news like the adult I should be I plan on making several very public, and very drunken, rants about my dissatisfaction.  If you happen to see a middle-aged man standing on a pool table in a smoky bar, wearing a small trashcan as a fez and saying things like, “I got your sonic screwdriver right here!” yeah, that’s probably me.

On the flip side of the reaction coin is Matt Smith who’s not letting the fans forget how important they are to him.  He may be in Detroit with a buzz-cut filming a motion picture, but he recently took time out of his shooting schedule to make a thoughtful thank you video to everyone who supported him during his run in the TARDIS.

This video has been out for a couple of weeks and I apologize for my tardiness in bringing it to you, but I’ve been away since the day before it was released and am only now able to share.  Please enjoy and try not to cry too much while watching it.  I’ll handle the crying and the drinking, thank you very much.

This method of using flip cards in videos has been around a long time.  Many of you may be most familiar with the use of such a technique from the film “Love Actually” where none other than Andrew Lincoln (Sheriff Rick Grimes of The Walking Dead) declares how much he loves Keira Knightley’s character.  You can watch that clip of Rick Grimes being something other than crazy, pissed and angry RIGHT HERE.

If you’re really freaking old like the Doctor, or myself, then you might even remember way back in 1965 (when everything was in black-and-white) when Bob Dylan had the idea for his song Subterranean Homesick Blues (Pssst…click the title if you want to see the video).  Making music videos back then must’ve been frustrating since there was no MTV around to play them for you.  Although that’s not half as frustrating as actually having an MTV around today that doesn’t play music videos.

Doctor Who will return on November 23rd with Matt Smith making his second-to-last outing as the world’s oldest, brightest, and most fun kid in all the universe.

Various and sundry linkages for your browsing pleasure: