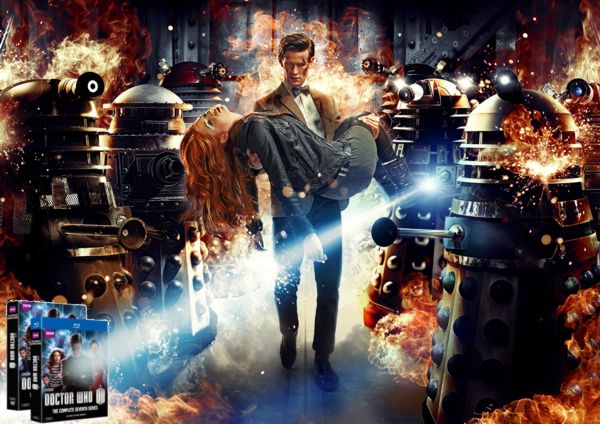 DOCTOR WHO: THE COMPLETE SEVENTH SERIES

Are you going mad waiting for the Doctor Who 50th Anniversary Special to air?  Do you find yourself screaming at your calendar hoping it’ll jump you forward in time to November 23rd?

Since, unlike the Doctor, we can’t do anything about the progress of time the BBC have a great solution to tide you over until the TARDIS returns.  They’ve announced the release date for the complete series 7 on DVD and BluRay to be September 24, 2013.

Having the entirety of series 7 at your fingertips plus bonus material should tide you over nicely until November arrives.  Okay, so now we’re just screaming at our calendars for September 24 to get here.

So, I bet you want to know exactly what’s in the bonus features dontcha?  I’m not one to tease and trot and neither is the BBC (Except for maybe that SDCC trailer for the 50th we’re still waiting for).  So, straight from the official press release, here’s just what you can expect in the bonus features.

–       Behind the scenes featurettes for every episode of Series 7 plus  The Snowmen
–       Interviews with Matt Smith and Jenna-Louse Coleman from BBC AMERICA’s The Nerdist
–       All-new featurettes INFORARIUM, Clara and the TARDIS, and Rain Gods
–       Other featurettes including: The Making of the Gunslinger, Creating Clara, Last Days of the Ponds, and Pond Life
–       Doctor Who Specials: The Science of Doctor Who, Doctor Who in the US, The Companions, and Doctor Who at Comic Con
–       Prequels to episodes: The Doctor, The Widow and The Wardrobe, Asylum of the Daleks, The Snowmen (x3), The Bells of Saint John and The Name of the Doctor (x2)
–       Audio commentary for episodes: The Snowmen, Cold War, Hide, and The Crimson Horror

There’s a lot of good stuff in there and the price isn’t too bad, either.  You get a 6-disc set of all thirteen episodes, two Christmas Specials (2011’s The Doctor, The Widow and The Wardrobe & 2012’s The Snowmen), and all that yummy bonus material listed above.

Considering that’s 645 minutes of Doctor Who plus bonus materials, or what amounts to the equivalent of 7 feature-length films for under $90, it’s a real bargain.  Using that unit of measure, that’s less than “$13 per movie” and that’s not counting all the juicy bonus material.

When you look at it like that it’s practically a steal.  And who can put a price on the love of all things Whovian anyway?  Am I right, or am I right?

Keep reading to check out the rest of the press release straight from the BBC themselves.

New York – July 29, 2013 – BBC Home Entertainment releases all thirteen blockbuster episodes from the seventh series of the iconic sci-fi series Doctor Who on Blu-ray and DVD on September 24, 2013. In addition, the set collects the 2011 and 2012 Christmas Specials, and exciting bonus features including behind-the-scenes featurettes, “Doctor Who at Comic Con”, the BBC AMERICA specials “The Companions” and “Doctor Who in the US,” and more. These latest adventures test the Eleventh Doctor (Matt Smith) and prove that even a madman with a box needs help sometimes.

Say farewell to the Ponds all over again. Meet the enigmatic Clara for the first time – and the second, and the third. Face enemies new and old, follow the Doctor to the one place he should never go, and learn the secret to a really great soufflé. With a cliffhanger ending that will leave fans breathless, this set arrives just in time to catch up before the Doctor Who 50th Anniversary Special on November 23, and the Doctor’s regeneration in this year’s Christmas Special.

In The Doctor, The Widow and The Wardrobe, the 2011 Doctor Who Christmas Special, the Doctor proves that sometimes wishes really do come true when his mysterious gift leads Madge Arwell and her two children to a magical wintry wonderland. Then, in the first part of series seven, the Ponds (Karen Gillan and Arthur Darvill) make their final voyages with the Doctor. They save a spaceship full of dinosaurs, don Stetsons in the Wild West and are even kidnapped by the Doctor’s oldest foe. But when they arrive in Manhattan the Weeping Angels are waiting for them – and the Doctor has to say goodbye to his companions forever.

The 2012 Christmas special, The Snowmen, brings the Doctor a new friend (Jenna-Louise Coleman) in Victorian London – but has he already met her before? And will she be able to pull him from his mourning in time to save London from the chilling menace that threatens it? The final eight episodes of series seven see the Doctor and his new companion battle monsters on distant alien planets, become trapped in a Russian submarine with a deadly passenger, chase terrifying ghosts, and come face-to-face with an army of upgraded Cybermen. When his friends are kidnapped, the Doctor and Clara are forced to visit the fields of Trenzalore, where the question that must never be answered is finally asked… and the Doctor uncovers the secret of the Impossible Girl.

Doctor Who premieres as part of BBC AMERICA’s Supernatural Saturday programming block in the US, and on SPACE in Canada.

Again, Doctor Who: The Complete Seventh Series will hit the streets on September 24, 2013.