Old ones, new ones and red ones a review of Buffy Season 9 the Core part 3 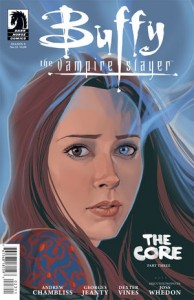 Welly welly welly well, what do we have here? An issue of Buffy Season 9 that actually is better than the last issue of Angel and Faith? Yes, blimey we do! This review includes spoilers and speculations

So yes, I actually think for once that this issue of Buffy Season 9 is better than the last offering of Angel, and if you have read any of my previous reviews you will know that I have loved Angel but thought Buffy has been a bit un-even. This issue and issue 23 of Angel bear a lot of likeness, as both are big fight issues, but the Buffy one actually has more of a storyline in it, and not just a lot of fighting.

So this is what goes down in short. Buffy, Willow, Koh and Illyria are fighting their way to the middle of the well. Considering the Council is still there to stop them, this is proving a bit tricky.

The Siphon is busy sucking up energy and magic, asking Simone to protect him from the Council, but it seems our rogue Slayer has her own agenda…

Willow and Buffy end up at some sort of magical core, and Willow starts glowing red. Buffy wants to keep on going with her, but Willow urges her to go help Illyria and Koh, she promises Buffy she will save Dawn (except both have forgotten her name by now).

Xander, who is being guarded by some sort of Zen demon (err yeah) gets a phone call from Spike. It has to be said that their mobiles have amazing reception, I mean Easter Island and now the centre of the earth, very impressive. Spike is forgetting Dawn, even Dawn is forgetting Dawn, so he is calling Xander as he knows that he is the only hope of saving Dawn from fading away. He tells her he will never forget her. Spike tells Dawn he wants to talk to Xander, he has some info regarding Simone.

So lets move on to Simone. We knew she was creating some sort of Slayer-zompire hybrid before, now the gang are lead to believe her plan is to create such an army, but nooo, it seems she had a different reason for getting into the well. She has dug up vampire demon Numero Uno, maker of all vampires, Maloker, who’s a rather big fellow who is keeping many of our heroes busy fighting. Meanwhile Xander and Buffy find the corpse of Simone, who gave herself as a tasty snack to Maloker. Of course it ends with her rising and her telling Buffy she no longer needs an army…

Yes, so lots going on here, I can’t wait to find out how it all plays out. One part of me thinks the Siphon might be successful turning back time, as there seems to be a lot of history that they might want to have changed. Angel killing Giles, zompires, Billy…but another part of me thinks it all lays with Willow and her becoming the new core. I guess we just have to wait and see….