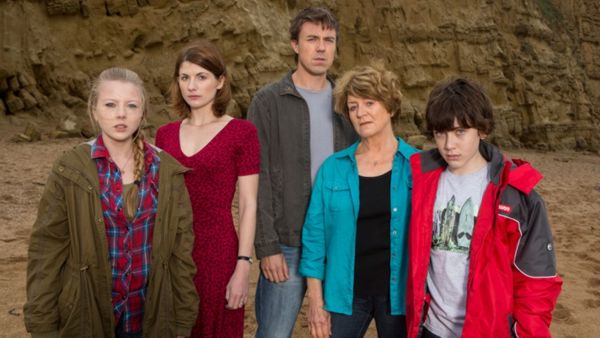 Last week’s episode revealed the murder scene to be the hut by the beach, but in revealing crucial evidence it also raises questions.  The biggest question being how did the body of Danny Latimer end up a mile down the beach if he was killed in the hut?

When episode two ended Danny’s father, Mark, was very evasive when interrogated about his whereabouts.  Loner Susan Wright, while not yet a suspect, was shown hiding Danny’s skateboard in the closet of her mobile home.  And finally we had “psychic phone guy” whose real name is Steve Connelly.  He seemed to genuinely believe he has a psychic gift, but is he psychic or psychotic?

It’s such a good feeling when a great mystery comes along and runs every character through the mill until your head is spinning with possibilities.  In fact, during the filming of Broadchurch even the actors didn’t know the identity of the killer until filming was nearly complete.  Everyone on set was playing detective between takes in an attempt to deduce who the killer was.

And speaking of the killer’s identity, take a gander at the preview for episode 3.  The investigation is in full swing and several people are in the hot seat.

As the murder scene in the case of Danny Latimer becomes clear, DI Alec Hardy tries to reconcile it with the site where Danny’s body was found – over a mile away. Why was the body disposed of this way?

Hardy and DS Ellie Miller ask Mark Latimer to give a statement. He says he was with Nige – his workmate – on the night of Danny’s murder. His fingerprints were at the murder scene because he mended the boiler there recently.

As Hardy and Ellie question Nige, Mark’s alibi quickly falls apart. Susan Wright denies that Mark got the keys from her, and when they search Mark’s boat, Ellie and Hardy find recent blood stains.

Steve Connelly follows Beth, and when alone, he approaches her – first offering condolences, then telling her he has a message for her – from Danny. Beth runs away, distraught.

Ellie’s husband Joe brings their son, Tom, to the police station for questioning. Tom is nervous, but eventually reveals that Mark had recently hit Danny.