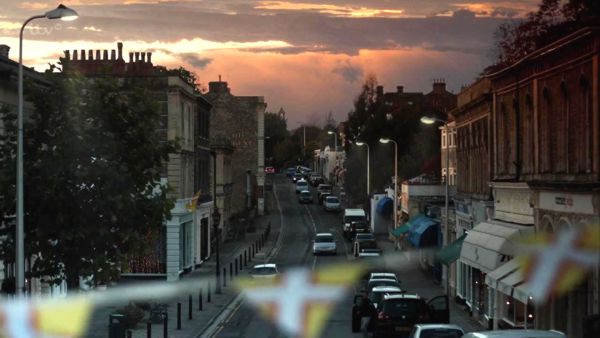 After last week’s cagey behavior when interviewed by DI Hardy, Mark Latimer is called in to the police station for questioning.  Hardy’s not buying Mark’s weak story about being unable to remember the name of the friend he was out with the night Danny was killed.  When Mark conveniently remembers it was his employee, Nige, during the interrogation it does nothing to convince Hardy that Mark Latimer isn’t a likely candidate for the murder.  After Psychic Steve said Danny was in a boat, Mark’s admission that he owns one just makes him look even more guilty.  It didn’t help that we saw him texting Nige before leaving for the station to apparently invent an alibi. 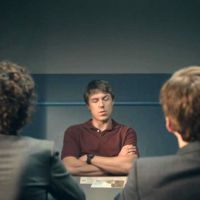 Things just keep getting worse for Mark and it’s all of his own doing.  He said he was at the hut to fix a broken pipe, but grumpy loner Susan Wright, keeper of the hut keys, claims she never gave the keys to anyone.  Miller found blood on his boat and later she catches Nige in a lie as he tries to cover for Mark regarding his whereabouts on the night of Danny’s murder.

Mark swears he got the keys from Susan.  He even describes her mobile home and the dog she owns.  He admits the blood on his boat is Danny’s, but it was from a fishing trip well before Danny’s death.  Daughter Chloe was along on the trip and Mark says she can vouch for the story, but he’s still being evasive about where he was the night Danny was killed.  Because of his refusal to state where he was on that fateful night, Mark is arrested for obstructing a police investigation. 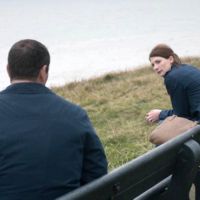 Beth is still feeling claustrophobic in her home so she once again ventures out, mostly just wandering around.  Unbeknownst to her she’s being followed in a creepy, stalker way by Psychic Steve.  When she sits at a seaside bench, Steve joins her and reveals that his motives were simply to give her a message from Danny.  Well, Beth is having none of that and storms off telling Steve to stay away from her.

And continuing the bad news for Mark Latimer is the revelation that he may have hit his son on several occasions.  When Hardy interviews Danny’s friend and Miller’s son, Tom, the young boy tells them Danny said his father hit him.

Karen White, the journalist from London who’s been poking around town and spending time with Olly reveals to newspaper editor Maggie Radcliffe why she’s in Broadchurch.  Apparently DI Hardy worked a previous case involving a child being murdered and he didn’t get a conviction.  Karen’s worried the same thing is going to happen in Broadchurch.

Hardy meets with an older gentleman at what appears to be a bus stop and refers to him as the only friendly face he’s seen since he arrived in Broadchurch.  The man is Hardy’s doctor who tells him he needs to stop being part of the investigation and reduce his stress or he’s likely to die.  Hardy says that while he hates being there he’s doing penance, assumedly to make up for his failure of the previous investigation Karen White was referring to. 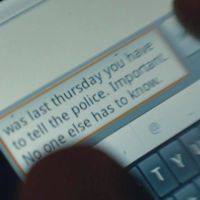 We’re shown Chloe sending a text to someone asking them to tell the police where her father really was.  It turns out that person is Becca Fisher, the hotel owner, and she tells the police she was having sex with Mark.  Apparently it was a one time thing and she says it was a mistake, but at least now we know why Mark was reluctant to tell anyone about that night.

At home, Beth gets a note pushed through the mail slot in her front door.  The note was from Psychic Steve whom she calls over to the house.  Steve tells Beth that Danny says not to look for the person who killed him since it’ll only make her upset because she knows that person really well.

Even after the revelation about where Mark really was, Hardy still thinks he could’ve killed Danny.  He theorizes that maybe Danny found out about the affair and Mark killed him to keep him from telling others.  Now even Beth is beginning to have her doubts about her husband.  While they’re in bed about to go to sleep she asks Mark if he did it. 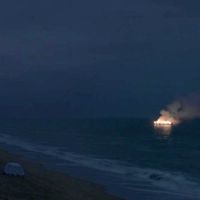 Angered by this question, Mark walks out of the house.  He meets Becca out on the street where they talk about the affair a bit.  While Mark still seems to want a relationship with her, Becca makes it clear it was a mistake and won’t happen again.  She tells him to go home then they kiss before he departs.  Beth followed Mark and witnesses the kiss from the end of the street.  This is the first time she’s had any idea of what Mark may have been up to.

As the episode closes, we see a small boat just off the shore near the crime scene.  The boat is engulfed in flames.  Could this be the boat that Danny was supposedly in the night he died?