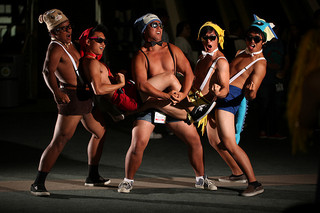 You’ve seen plenty of pictures of amazing cosplay from Comic Con, Otakon and other conventions across the world. What you don’t see is the cosplaying subculture that influences the choice of character the cosplayer picks, the way clothes are dsigned and even how players act. The SyFy Channel’s “Heroes of Cosplay” takes a look behind the scenes and explores this subculture in depth, so if you’ve ever wondered what it was like to be a cosplayer, this is your best bet in figuring it out.

If you’ve ever been to an anime convention, you know that there’s plenty of drama and intensity going on behind the scenes, whether you examine the competitions or the drive to make the most spot-on cosplays in the world. According to SyFy, “Heroes of Cosplay” doesn’t stick with only the top-level cosplayers. They present a range of experience and skill, so you get an idea of what cosplaying is like for every level involved. USA Today reports that “Heroes of Cosplay” is slated as a six-episode series.

Unlike many reality television shows, the L.A. Times doesn’t believe that “Heroes of Cosplay” is playing up the drama factor. It has its moments in the first-aired episode, but overall it gives a look into a hobby and subculture that most people have no idea about. The bulk of the show is devoted to the time, energy and money spent on making the costumes, which are sometimes based on swimwear and other existing clothing patterns, and learning how to act in character. It’s much more challenging than you’d expect, and these true fans do everything they can to make it work.

A Look Into Conventions

This show is also great if you’ve been tempted to go to conventions such as Comic-Con or Otakon, but you’ve never quite known what’s going on there. You’re immersed in the world as much as the cosplayers are, giving you an idea of what to expect if you make your way out there. It’s also perfect for the budding cosplayer who has always wanted to get competitive with their cosplays. The pros and cons of a move like that are clearly represented, and you feel personally connected with people who you might run into at the conventions.

“Heroes of Cosplay” has the makings of a great reality show and documentary series, so it wouldn’t be surprising if it spawned additional nerd-centric reality television. It’s been done in the past, but a success on this front could bring some of the more entertaining shows off of Youtube and into your living room on the SyFy channel.

Christian is an aspiring actor who dreams of headlining on Broadway. In the meantime, he is content to write about the entertainment world.