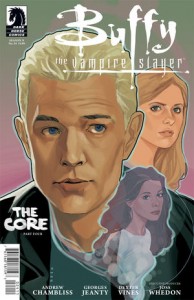 Buffy season 9 certainly has improved a lot in these last few issues, and in this one issue before the final one, things are really exciting. After reading it I am really looking forward to the big finale. This review includes spoilers.

Right, like in Angel and Faith a lot of fighting is still going on here. Buffy is battling Slayer turned Vampire (with blood from an old one, I guess this means they don’t turn into a zompire? Or is it to do with her being in the deeper well?) Simone, who now seems to think she is the strongest creature alive. Really? Not so sure about that.

Willow is off on a magical mystery tour down the deeper well and I guess she gives birth to a new magical seed, which drains her of her magic. The baby seed gives her some good and some bad news, good news magic is coming back to earth, bad news not until another millennia. Willow has an aha moment after saying that isn’t good enough for Dawn and takes the seed to Severin who is about to go kablooey. Illyria is also with him, trying to talk some sense into him. It might be working as she starts talking about the love Fred and Wesley had saying she understands his pain. My guess is that Severin’s kablooey-going could work as a big ol’ incubator for the baby magical seed. As Andrew and Spike can no longer see Dawn, you better pray it will work.

Koh and the council are fighting that very big evil first vampire old one, I have to say as I haven’t really bonded with Koh I didn’t really care much for what went on here. In fact all the new charachters that they have brought into Buffy season 9 have been pretty worthless, but at least Koh is one that seem to have a storyline of sorts, That potential love interest/policeman remember him? Yeah vaguely, but it seems the writers have forgotten all about him. I think one of the most annoying thing about the season is all the plot holes where things have been left to fizz out without a proper ending. Maybe the writers understood they were so unpopular they just thought meh?

Yes, I don’t like Simone much either, I don’t really get her total pissedoffness with Buffy? Anyway, the comic ends with Simone standing up holding a rather beaten up and bloody looking Buffy hanging off the scythe.

I still stand with what I said in the start of the review, I think it has improved and I actually want to know how it ends, but I do feel rather sad how ‘meh’ a lot of this season has been. It started out great with the pregnancy storyline, but then went downhill. I love Buffy and the scoobies and I don’t want to see them like this. I can’t help but wonder if Cage and Isaacs would have been a better choice for this season because they have done a stellar job on Angel and Faith. I haven’t heard what the plans are yet for a 10th season but I really hope they don’t leave off like this when there is some good potential here.

Bring on the last issue.