Revolution S1 – Got the Energy for S2?

I have just finished power-watching all 20 episodes of Revolution’s first season. While I think I’d like to power-wash some of those images from my mind, I enjoyed the show. I had some early reservations about the premise (and my son Andy says, “mom, it’s fiction!!! You don’t have to BELIEVE it.”), but I have to say, it grew on me. I’ll be recapping and reviewing Season 2 for you in the coming months, and I’m looking forward to it! Honestly, I’m not really big on the detailed recap – I’ll give you a fairly quick rundown of Season 1 in a bit, more to refresh your memory than to usher people who haven’t watched the first season into the next – and if you don’t tend to watch each episode as it happens, I might suggest that you wait to come to this page each week until you do, because, honestly, the whole thing could be one big spoiler. SPOILER ALERT! Two words you won’t see in my reviews. OK, I take that back… if I get some good stuff from NBC or the ComicCon coverage I’m about to watch about the next season, maybe I’ll post that at the top. But if you don’t like spoilers, you are responsible for your own satisfaction.

I really wasn’t prepared for how violent this show is. It’s on one of the big 3 networks, for crying out loud! I mean, maybe on HBO – but on HBO, I bet this would have been even worse (throat clearing, uh huh, Game of Thrones…). It’s interesting that the network (and the FTC) feels like it can show hundreds of people getting shot to death, blood all over the place, wounds in detail, but Miles Matheson’s favorite word has to be “crap.” 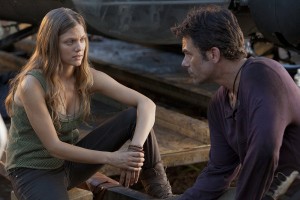 Family is Who You Make It

There a couple of strong themes in this show – family is the first. Your family is who you love, related by blood or not. There’s more of a feeling of family – and more of a discussion about it – between Miles and Monroe than between Miles and Ben Matheson, who, since Ben dies in the pilot, are never seen together (not even in flashback). They frequently refer to each other as brother, whether in flashback happy times, or when they’re trying to kill each other. Charlie has had family forced upon her with Maggie, her father’s girlfriend; lost and reluctantly regained, as her mother returns to her life; accepted over time as Nora and Aaron both work and fight by her side; and ripped from her over and over, as her brother Danny is kidnapped, found, recaptured, refound, and ultimately killed. Her blood family becomes stronger as Miles finally figures out that his niece Charlie is important to him; and as she begins to accept her mother again.

Power – it’s seductive qualities, the fight to gain it and the fight against who it turns you into – is important in this world. Monroe has given into the madness it creates; Miles has nearly been completely sucked in but tears himself away, only to find it calling again; Neville craves it and is prepared to sacrifice family and honor to gain it. 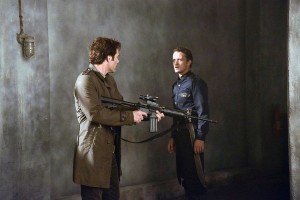 Of course, there’s always the blah blah survival in harsh and unimaginably horrible situations; the consequences of actions intended and unintended; and the what-if thoughts that run through all our heads, especially during tornado season.

Quick words on the cast. Billy Burke (Miles Matheson), who I don’t remember seeing before (ok, I haven’t watched Twilight), has a great thousand yard stare. I wondered for a while how he kept his sideburns so razor sharp in the post-apocalyptic wasteland, but by the final couple of episodes, he was looking satisfactorily shaggy. David Lyons (Sebastian Monroe) is compellingly handsome, and plays crazy and not quite in control very well. Zak Orth (Aaron Pitman), the resident group genius, is a little too “aw shucks” for someone who has two doctorates from MIT, and with all the walking this group has done – from Wisconsin to Philadelphia to Colorado – his continued pudginess, referred to more than once, is pretty unbelievable. But I liked him. 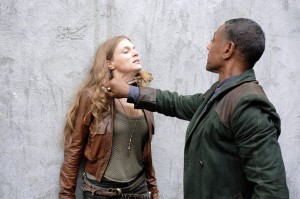 Elizabeth Mitchell (Rachel Matheson), who I loved in Lost, is again in her element – a woman who lives more in her head than most, and she plays emotionally tortured very well. Tracy Spiridakos (Charlie Matheson), as the heroine, was convincing as a young woman who loses her innocence, her hope, and her family, and feels her humanity slipping away. Oh! And I can’t forget to mention Giancarlo Esposito (Tom Neville) as the villain– more so even than Sebastian Monroe. I hate him. No redeeming qualities. Not one.  Neville, I mean, not Esposito. Although if I had the chance to meet him in person, I’m not sure I could get past this character to enjoy what I’m sure is a perfectly pleasant man.

And My Final Burst

And a final word. In the interest of full disclosure, I have to tell you that I’m a major Falling Skies fan. That’s how I got this gig. And I feel like Revolution has ripped off a lot from Falling Skies, from the opening title to the graphic on their NBC home page. Sorry, but Falling Skies was there first. (And while I’m nitpicking, what was with the episode names this season? Dark Tower – Steven King book. Night the Lights Went Out in Georgia – cheesy song; Kashmir – great song. Children of Men, Clue, Longest Day – movies. Love Boat, Soul Train – TV show. Let’s hope this trend doesn’t continue. Find something original. Like Molon Labe or Journey to Xibalba.) 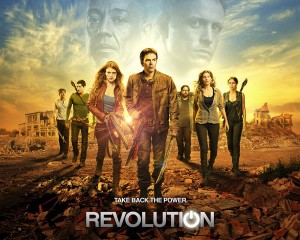 The second season of Revolution starts on Wednesday, Sept. 25. I’m sure you’ll see ads and trailers about a thousand times between now and then – set your DVR!