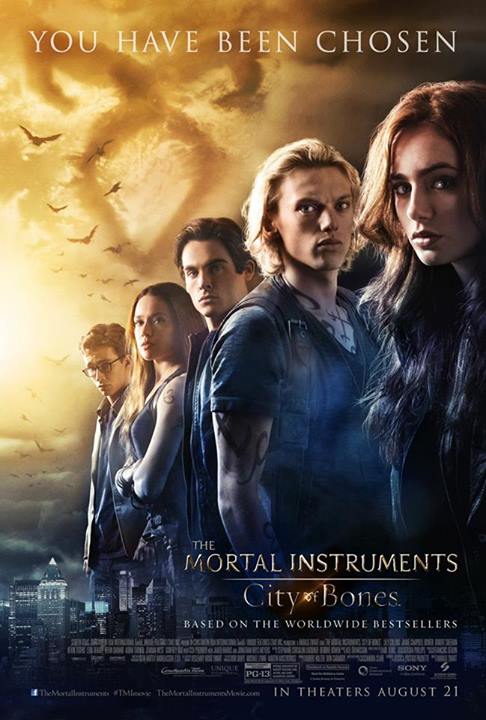 Whenever a book is made into a movie – and you’ve read that book – the level of expectation is different. Will they adapt the book correctly, as you’ve imagined it in your mind? What will they take out, and what will they add? Will you come out cheering or full of disappointment? As a long-time fan of Cassandra Clare’s Mortal Instruments series, I absolutely loved it – and I think you will, too, whether you’ve read the books or not (but you should read them!).

The film stars Lily Collins as Clary Fray, a teenager living in New York City with her mother Jocelyn, an artist (Lena Headey). She’s got her best friend, Simon (Robert Sheehan), and friend of the family Luke (Aidan Turner), and a perfectly normal life – or so it seems. But then she begins drawing strange runes everywhere and seeing things no one else can – like a group of people murdering another man. Then her mother is kidnapped, and a demon tries to kill Clary in the wreckage of her apartment when Jace (Jamie Bower Campbell) arrives and slays it in front of her.

It turns out that Jace is a Shadowhunter, part of a race of half-human, half-angel beings who are born to fight the demons and keep the Mundanes (normal humans) safe. Jace takes Clary and Simon to the Institute, where she meets two other young Shadowhunters, Isabelle (Jemima West) and Alec Lightwood (Kevin Zegers), and Hodge (Jared Harris), who runs the Institute and helps the younger Shadowhunters to learn and train. There, Clary learns that she is also a Shadowhunter, as is her mother. More revelations continue to come as Clary learns about the secret world that exists alongside the ‘normal’ world while trying to find her mother and the Shadowhunter relic that her mother hid years ago from a Shadowhunter gone bad, Valentine (Johnathan Rhys Meyers). Will Clary and the Shadowhunters find Jocelyn and the Mortal Cup? You’ll have to see the movie (or read the book) to find out!

As with any book made into a movie, there were details glossed over and things that aren’t fully explained, but these shouldn’t keep anyone who hasn’t read the books from having a problem understanding what’s going on. The film was only 90 minutes long, and I can’t help wishing they’d added a little more time to flesh out some of those details. The special effects are spectacular, and the details of the Institute and the City of Bones in particular are breathtaking. The fight scenes are very well done and showcase the various Shadowhunter weapons and skills nicely. Lily Collins is excellent as Clary, as is Robert Sheehan as Simon – I couldn’t have imagined better. We don’t see nearly enough of Godfrey Gao as Marcus Bane, but he also does an amazing job. Truly, all the actors are wonderful, but these three were the standouts for me.

The verdict – if you like action films mixed with supernatural plotlines, you have to see The Mortal Instruments: City of Bones.

Here’s a teaser to convince you:

A final bit of of good stuff – the movie based on the next book, City of Ashes, is due to begin filming in the fall.